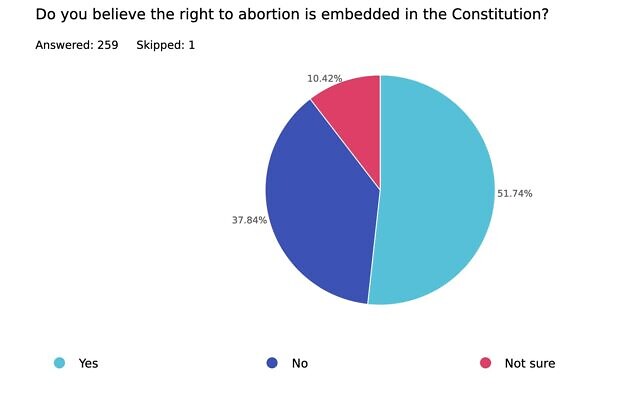 Last week, the Chronicle asked its readers in an electronic poll the following question: “Do you believe the right to abortion is embedded in the Constitution?” Of the 260 people who responded, 52% said yes; 38% said no; and 10% said they weren’t sure. Comments were submitted by 80 people. A few follow.

The right to control your own body, to make your own decisions that affect your life and to exercise the freedom to determine your own destiny are embedded for all people.

I ask anybody to show me where! Good luck!

The word “abortion” does not appear in the Constitution. But the concept of “personal freedom and responsibility” for one’s body, including that of “abortion” is guaranteed for each of us … for all of us.

I couldn’t find it and I read the whole thing.

It is not specifically mentioned but then again many other rulings (same-sex marriage, non-segregated schools) aren’t either. The current court seems to be running on the Christian Bible and Christian principles rather than what is best for the country.

I believe that the right to privacy and the right to pursue happiness are quite explicit, and that writing any law or otherwise extruding a ruling which prohibits an action which is not fairly universally reviled (such as murder, rape, treason, and tax evasion) must be interpreted as being against our civil rights. Civil law is civil law. We do not legislate religion, nor do we make laws against religion. Or at least we shouldn’t do so. Abortion is a legitimate medical procedure, absolutely necessary in many cases to protecting life, health, and/or future reproductive capacity. Who is the government to decide to limit it?

No, but that doesn’t mean it shouldn’t be allowed. Not every right we have is a constitutional guarantee.

It’s not embedded in the Constitution but it’s a right to privacy. We don’t need a bunch of pompous men governing women’s bodies.

This is a more fundamental constitutional right than is any right to own a firearm.

It’s not in the Constitution, but I still think it should be law.

Life, Liberty, and the pursuit of Happiness. An unwanted or forced pregnancy would endanger this provision! PJC