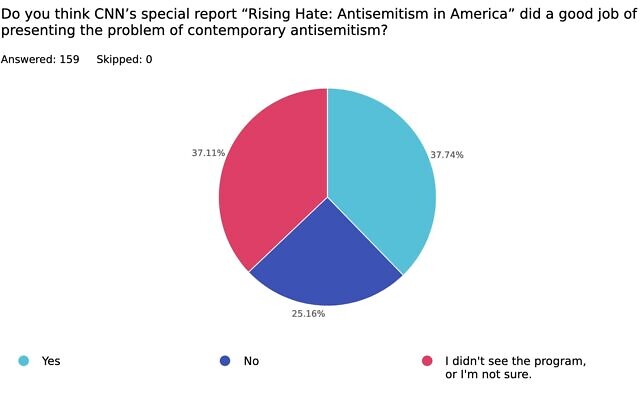 Last week, the Chronicle asked its readers in an electronic poll the following question: “Do you think CNN’s special report ‘Rising Hate: Antisemitism in America’ did a good job of presenting the problem of contemporary antisemitism?” Of the 159 people who responded, 38% said yes; 25% said no; and 37% said they didn’t see the program or they weren’t sure. Sixty-one people submitted comments. A few follow.

There was some good material but they completely missed the mark. How do you have a special report on antisemitism in America and not mention or highlight the worst attack on American Jews — the Tree of Life shooting in Pittsburgh?

While the show legitimately discussed antisemitism on the right, it was far too complacent about antisemitism from the left. I was quite surprised about this bias.

The Tree of Life massacre should have been featured. That was the violence that was caused by white supremacy, which is what we in Pennsylvania most fear.

I did not see the program because I do not trust anything that CNN has to say. They are a one-sided, liberal rag.

This program needed to be aired, but I try to keep up on antisemitism so I did not learn anything new.

While it may have presented the problem, I am concerned that it fired up the antisemites who might have watched it or the hard-right media who might have reported on it. In other words, sometimes we should just be quiet.

I am glad that part of the program featured the good work of the Secure Community Network and Brad Orsini. They have been very helpful to our congregation in providing very useful information.

Not enough attention paid to left-wing members of Congress like Rashida Tlaib who are antisemitic.

They made it almost seem like there was an equivalence between the antisemitism from the right and the left! Fortunately they did explain that basically all of the violence was from the right.

I feel that it was too superficial. But I think that occurred due to the one-hour time frame.

Valiant effort but gave the topic short shrift…no mention of often identifiable religious Jews being accosted on the street or subway platforms; the bds movement; antisemitism on university campuses; scapegoating Jews for the ills of society, to name but a few.

They left out the worst attack in U.S. history! Tree of Life. Very disappointed.

I say “yes” with qualifications. It was a good overview, touched on each of the major issues, interviewed distinguished people. Deborah Lipstadt is extraordinary, Jonathan Greenblatt always stands out. But the program did not go in depth. A set of follow-up programs that delve into each segment touched on would be appropriate.

The fact that Pittsburgh and Tree of Life were not mentioned was mind-boggling to me, as I suspect it was to many — certainly in our city and/or connected to Pittsburgh. PJC