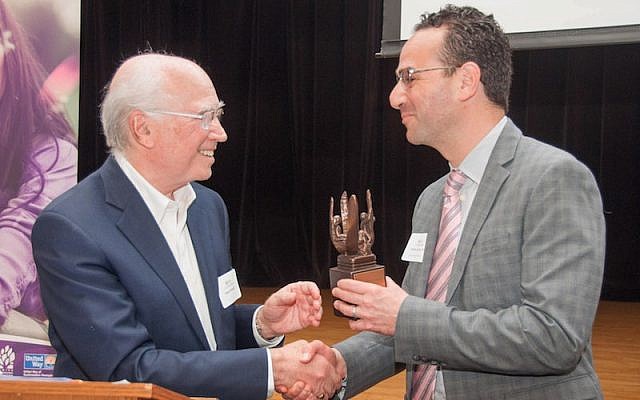 Bob Whitehill presenting JFCS Board Chair Dr. Matthew A. Keller with the Shore-Whitehill Award for outstanding leadership in the cause of inclusion and disability rights. (Photo by Adam Flanagan)

Nominations are being sought for the Shore-Whitehill Award, given annually by the Jewish Federation of Greater Pittsburgh and Jewish Residential Services to celebrate the Pittsburgh Jewish community’s champions of inclusion.

Previous recipients of the Shore-Whitehill Award include Lisa Lederer, co-chair of the DisAbility Task Force at Temple Sinai for her effort in working against mental health stigma; Dr. Matthew Keller, former board chair of Jewish Family and Community Services, for his work for inclusion of people with disabilities; and Dorothy Pollon, a member of the board of directors of Friendship Circle of Pittsburgh, who has advocated on behalf of children and young adults with disabilities.

Nominations will be weighed by the value of the nominee’s contributions as a champion of inclusion, and the commitment of the nominating organization to publicly honor the nominee, to “serve as a springboard for change and inspire further action by others,” according to a press release.

The organization whose nominee is selected will receive a grant of $1,000 to help underwrite the costs of hosting a recognition event and/or inclusion activities to be held during Jewish Disability Awareness & Inclusion Month, which will be February 2022.

The deadline for nominations is Tuesday, Aug. 31. For more information, or to access the nomination form, visit jrspgh.org or contact Alison Karabin at akarabin@jrspgh.org or 412-325-0039. PJC