Players start at various places on the board in “Broke: The Game” based on their character’s life experiences. Photo provided by Dana Gold.

To do that, she believes people must first understand the decisions forced upon those living below the poverty line.

“I would spend a lot of time going from meeting to meeting, congregation to congregation, talking about the work that I did,” said Gold, chief operating officer of Jewish Family and Community Services. “People would come up to me and say, ‘Oh, you’re such a good person,’ or they would hand me a check, both of which are appreciated but neither is very effective at ending poverty.”

Gold decided to try something completely different — and created a game.

Hoping it could be a way to create conversation around a difficult topic, she sat down with paper and pen and sketched out what would become “Broke: The Game.” The objective, she explained, is to replicate the stress felt by those forced to make hard decisions when there’s not enough money and competing priorities.

Think of it as a realistic version of The Game of Life.

Players choose a character and start in various positions on the board based on life experiences and privilege. So, the recent college graduate and recently divorced suburbanite start closer to the goal of financial stability than the undocumented worker or homeless person. Players are given a set of stars that represent the privilege they have built into their position. Given the biases built into the game, Gold said, the college graduate almost always ends up winning. 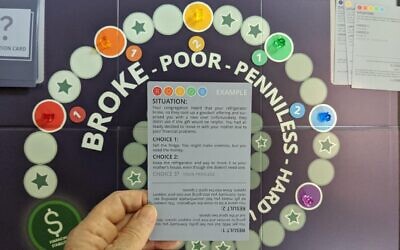 She has used the game to train educators, police officers and volunteers, and has even played it with groups of grade school children.

“It’s fascinating watching them start to think about their decisions and how those decisions affect their future,“ she said.

As they play, people develop empathy and understanding, Gold said. A teacher told her after playing the game she finally could understand why a student kept coming to school with a backpack untouched and filled with papers.

“It helps people get it and want to change, and that’s what we want,” Gold said. “We want to change the systems of poverty that keep people from being their best selves and contributing to society.”

Despite the passion she brought to creating the game, Gold is not a gamer. To turn her handwritten notes into a playable board game, she turned to the experts at Carnegie Mellon University, including her old friend, Drew Davidson, the director of CMU’s Entertainment Technology Center. Davidson connected her with other people in the field who helped her secure a grant to hire two interns to help design and work through the logic of the game.

“They helped me get this off a piece of paper and into a real box with the board, with the color, with the design and the appropriate spacing between questions,” she said.

Davidson also secured a funder to help Gold transform the concept from a physical board game to a free app that can be played on an iPhone or Android device.

In 2018, a team of students at CMU spent an entire semester working on the game, ultimately creating “a really good app experience,” said Gold.

While the board game involves multiple players, the app is a single-person experience. Players pick a character, are given a dossier and must make choices based on a goal and challenges. Navigating through the game, characters are faced with real-life setbacks and familial needs. In the end, you win or lose based on your bank balance.

The mother of two used real-world experiences to create the game, lending a credibility and realism to many of the situations. Before her tenure at JFCS, Gold was the director of the homeless men’s shelter at the East End Cooperative Ministry, was the founder and executive director at Sojourner House, and was the founding director of program at Infinite Family, a nonprofit that provides mentoring opportunities for South African adults.

“Each of the organizations that I’ve worked with have added to the game in terms of the experiences I’ve had working with individuals,” Gold said.

The app can be downloaded through Google Play and the Apple App Store. The board game is available at brokethegame.com. Each board game is custom made so it takes several weeks to arrive.

Gold has big hopes for what the game could accomplish — nothing short of “change.”

“I’m serious,” she said. “If we can create empathy and compassion, a lot of things can change.” PJC