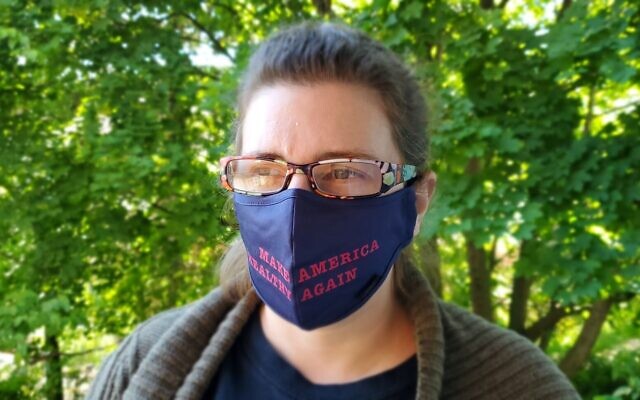 One of the facemasks developed by Marc Tobias plays on a phrase familiar to those that follow politics. Photo by David Rullo

The security expert, attorney and author has made a career of breaking locks and helping security companies solve problems they did not know existed.

“When I was 15, I started picking locks,” Tobias recalled. “My parents thought I would end up in prison.”

The future lawyer, though, had no interest in a life of crime. Instead, he majored in law enforcement and journalism in college, went on to law school and had ambitions to join the police.

Despite his bona fides, Tobias said his parents implored him “not to tell people you pick locks. Just tell them you’re going to be a lawyer.”

Respectability came after publishing his first book, “Locks, Safes and Security,” while still a senior in college.

“Once I was published, they said, ‘It’s OK, you can tell people you pick locks,’” he recalled with a laugh.

Tobias found a different sort of puzzle to solve earlier this year. In March, when people first were required to wear face masks because of COVID-19, and demand outstripped supply, he found a solution in a piece of clothing found in every Jewish home: the kippah.

“I looked at it and thought, ‘Well, there’s no difference between a yarmulke and a face mask except how you wear it,’” he said.

The Squirrel Hill resident is used to thinking outside the box. Co-director of Security Laboratories, which consults with manufacturing and law enforcement clients worldwide on lock designs, the analysis of security vulnerabilities, and legal liability issues, Tobias holds 13 patents and also invents various products for clients.

“To me, it was obvious,” he said. “It’s just like some of the other patents I have – you figure out what the need is and then figure out the way to solve the engineering side of it.”

While discussing an idea for a program to engage autistic children with opening locks, Tobias mentioned his mask/kippah concept to Friendship Circle of Pittsburgh Executive Director Rabbi Mordy Rudolph. Rudolph then put Tobias in touch with Dina and Sarale Seewald, owners of ikippahs.com.

Seewald and Tobias designed the masks based on his original idea, had them manufactured in China and a month later were holding samples.

“We got our first shipment of 120 in Pittsburgh and they’re all gone. Everyone wanted one,” Tobias said.

Getting the samples, though, was easier said than done in the age of the coronavirus.

“Our first prototypes were blocked by customs,” Tobias explained. Federal Express was the original shipper but because of issues between the U.S. and China, the order was delayed. Tobias and Seewald were eventually able to get the face masks into the country using a different company to ship the order.

To ensure the masks met current health standards, Tobias gave some to doctors he knew who approved of the design.

“They have an insertable filter that we’re told is better than an N95 filter, so it’s clever,” Tobias said.

Because of the passion Tobias has for Friendship Circle, he has underwritten the cost of 1,000 masks with some friends and donated them to the organization.

“One, because they need masks and two, because they’ve had no fundraising this year,” he said. “They may sell some of them and generate some profits. We think it’s a good idea and would help them.”

The masks come in three designs: one with the American flag, one all black, and one that is dark blue with red lettering that reads “Make America Healthy Again,” not because he is attempting to make a political statement but because “I thought it would be a good play on words,” Tobias said. 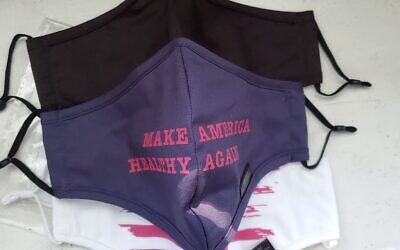 Tobias’ idea has been embraced outside of Pittsburgh as well.

“iKippahs.com is actually selling the masks now,” he said. “We really created a business for them. She sells them on their website. They’re tickled to death.”

Tobias is a transplant to the Steel City. He moved to Pittsburgh from South Dakota in 2016 after his best friend in South Dakota died. The Temple Sinai member’s grandparents, father, aunt and uncle had all lived in Squirrel Hill. When he decided to find a new home, Pittsburgh was “the only logical choice.”

“I have all these memories of my cousins taking me to IKC’s ( the Irene Kaufmann Center) and Isley’s. When I used to come here, 90% of the signage on Murray Avenue was in Hebrew. Now, because of the universities, everything has radically changed.”

Having helped to solve the puzzle of manufacturing face masks and getting them into the hands of those in need, Tobias has already found his next puzzle to solve.

“I was talking to Rivkee Rudolph (director of the Friendship Circle) and she mentioned the problem of face masks and deaf kids because nobody can see their lips,” Tobias said. “So, we’re going to get together with some of her people to figure out how to design a face mask for deaf kids because it’s a real problem and I think I know how to design it already.” PJC