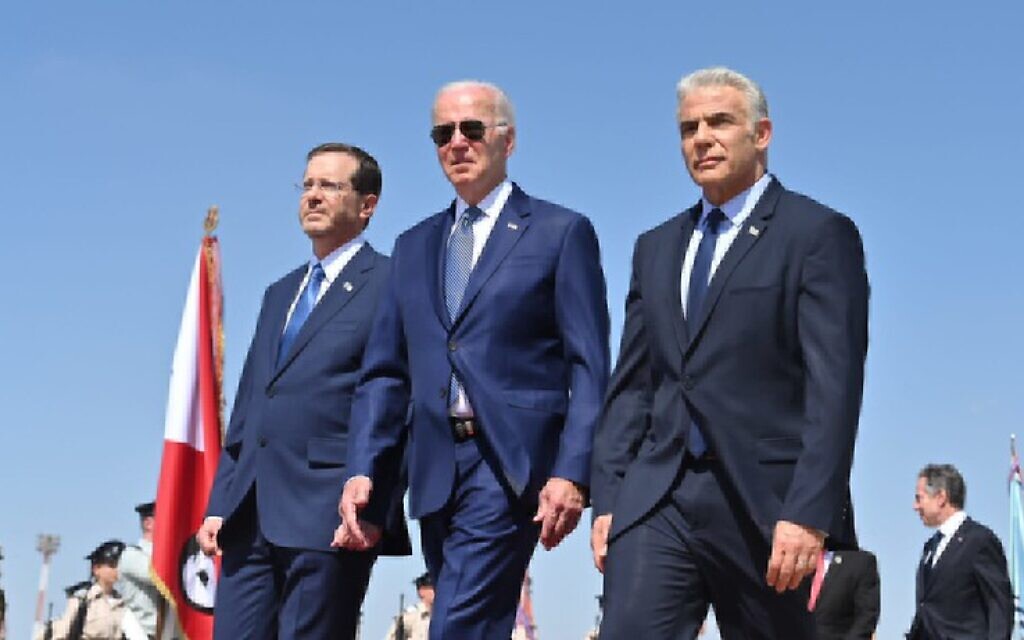 Joe Biden’s trip to the region is an “unprecedented opportunity to change dynamics in the Middle East,” a senior Israeli official told reporters last Tuesday, a day before the U.S. president landed at Ben Gurion Airport.

The superlatives from Israeli leaders continued after Biden had touched down. Prime Minister Yair Lapid called the visit “historic,” and President Isaac Herzog took it a rhetorical step further, likening Biden to the biblical Joseph “on a journey of peace from Israel to Saudi Arabia, from the Holy Land to the Hejaz.”

But the results of the trip were pedestrian, to say the least. And in some ways, the week should be a sobering wake-up call for Israel.

“The bigger the expectations, the bigger the disappointment,” said Yoel Guzansky, a senior research fellow at the Institute for National Security Studies in Tel Aviv.

Hours before Biden flew to Jeddah on Friday, the announcement that Israel had been waiting for finally emerged. Saudi Arabia’s Civil Aviation Authority declared that all civilian air carriers could now fly over the country. The Saudi statement did not mention Israel at all, but Lapid still called it “the first official step in normalization with Saudi Arabia.”

Biden cast the announcement in a similar light, calling it “a big deal… the first tangible step on the path of what I hope will eventually be a broader normalization of relations.”

But the Saudis, at least publicly, were quick to pour water on that notion. “This has nothing to do with diplomatic ties with Israel,” insisted Saudi Foreign Minister Prince Faisal bin Farhan, briefing reporters as Biden headed home.

Despite the over-the-top messages coming from official Israeli channels — perhaps not surprising ahead of an election — it should have been plain to all that Biden’s visit wasn’t actually about us.

“Biden had one central goal, and that is to try to temper the global energy crisis, through increasing production in Saudi Arabia and the United Arab Emirates,” said Moran Zaga, an expert on the Gulf region at the Mitvim Institute. “Everything outside of that in my view was a sort of decoration, an effort to divert attention to other places that suit the Bidenist policy — on liberalization, on peace, on rights, Palestinians.”

“Even when there started to be rumors about opening up the airspace, the question became ‘OK, and what else?’” said Zaga.
That didn’t stop Israeli leaders from doing everything they could to inflate the magnitude of the visit to Israel itself. Lapid and Biden signed the Jerusalem Declaration during the trip, which a senior Israeli official told journalists represented “an historic statement … that shows the unique nature of what we have between our countries.”

Lapid even had the document framed and on Sunday hung it up himself in the cabinet meeting room.

But there wasn’t really anything especially new in the statement, which committed the allies to working together to stop Iran from obtaining nuclear weapons, continuing to discuss Israeli-Palestinian relations, seeking to expand the Abraham Accords, and fighting antisemitism — all of which was happening anyway.

Israel did what it could to keep Biden appropriately occupied while he was in the country, helping him obscure the true goal of his trip to the region. Herzog granted him a Presidential Medal of Honor, the same decoration bestowed upon Czech President Miloš Zeman days before.

Biden also waved to the athletes at the opening ceremony of the Maccabiah Games, and participated in a zoom call with the leaders of India and the UAE.

That’s not to say there weren’t some poignant moments. Biden’s extended conversation on one knee with two Holocaust survivors at Yad Vashem returned him to his younger political persona, a tactile, caring man with an ability to connect with the public.
His Medal of Honor acceptance speech was warm and heartfelt.

But the hype around the trip and the minor developments in Israel-Saudi ties went beyond the typical liberties government spokespeople take around presidential visits. The messaging may even have harmed Israel in Saudi eyes.

“I think Israel caused damage here,” Guzansky lamented. “They inflated the Saudi issue with all sorts of leaks and briefings. It wasn’t historic, not in Israel and not in the Saudi aspect.”

“I think it reflects a lack of understanding in Israel about where the Saudis stand, what their sensitivities are, what their interests are,” he continued.

“They didn’t add anything to Israel’s diplomatic efforts,” Zaga concurred.

Right now, Riyadh has no reason to hand Israel — or the U.S. for that matter — any free gifts. Any gestures were made as part of a hard bargain with the U.S.

After a relative decline in regional status as a result of the war in Yemen and the fallout from the 2018 Jamal Khashoggi killing, the Saudis — and especially de facto leader Mohammad Bin Salman — were interested in reclaiming their place at the head of the Arab world.

And they were the big winners from the trip, getting what they were after.

“First, from Biden’s visit,” said Zaga, “he kowtowed to them, he agreed to accept the Saudis as what he called protecting American interests.”

“Second, as part of the visit, Saudi Arabia hosted this big inter-Arab summit. And once again, she is the country that hosts, that takes initiative, the leader, the driver.”

The Saudis weren’t afraid to flex their muscles as well. When Biden allegedly started hectoring MBS on the Khashoggi murder, the Saudi prince fired back by asking about the killing of Palestinian-American journalist Shireen Abu Akleh and the Abu Ghraib prison abuses in Iraq.

As Biden flew back home, Israel was left wondering how close it truly is to normalization with the Saudis.

After last week, it doesn’t seem that close at all.

Despite the intelligence cooperation and converging interests, the current relationship between Israel and Saudi Arabia is not analogous to the state of Israel-Emirati ties before the Abraham Accords. With the UAE positioning itself as a leading international center of culture and trade, Israelis were present at multilateral forums and international competitions.

Saudi Arabia is not the same type of country. There is not the same openness to the world or familiarity with Jews and Israelis. And the Saudi role as Custodian of the Two Holy Mosques means it has to be far more cautious about overt Israel ties without a solution to the Palestinian issue.

Other regional developments this week weren’t especially encouraging for Israel either. The much-discussed regional security alliance against Iran looks to be far less advanced than Israel would have hoped. Mentions of the framework during the visit were exceedingly vague, a far cry from a Middle Eastern NATO.

Even the UAE, the jewel in the Abraham Accords crown for Israel, put out a telling message during the visit. “The UAE is not part of any axis against Iran,” said presidential adviser Anwar Gargash, adding that Abu Dhabi is considering returning its ambassador to Tehran. The same spirit has been evident across the Gulf in recent months, as Arab countries cope with the reduced U.S. presence in the region by de-escalating with Iran.

The need to express enthusiasm over a U.S. president’s visit is entirely understandable. But Israeli leaders would do well to keep in mind that countries will craft their policies toward Israel according to their own needs and interests. Three countries may have moved ahead with normalization, but other potential partners are monitoring the benefits of the Abraham Accords while keeping a wary eye on Iran.

In the meantime, Israelis will have to make do with views of the kingdom from 30,000 feet. PJC

Lazar Berman is diplomatic reporter for The Times of Israel, where this first appeared.