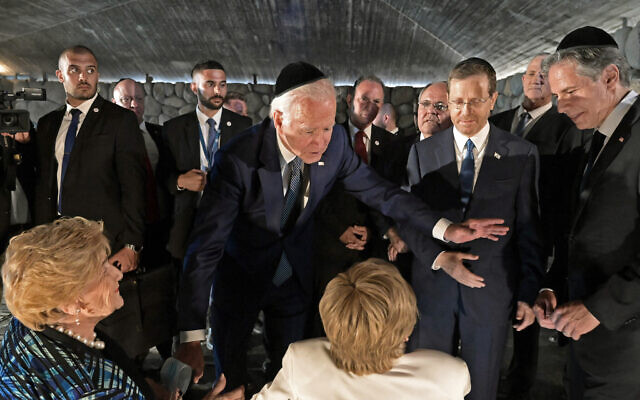 JERUSALEM (JTA) — Joe Biden dispensed with both social distancing and the chair arranged for him Wednesday as he embraced two Holocaust survivors, then knelt to speak with them during his first trip to Israel as U.S. president.

“I’m very excited about the meeting and also a little scared of it,” Rene Quint, 86, told the Jewish Telegraphic Agency ahead of the scheduled encounter — a brief conversation that she and another survivor, Giselle Cycowicz, 95, were scheduled to have with Biden at Yad Vashem, Israel’s national Holocaust museum and a regular destination for foreign heads of state.

But the president quickly put the women at ease, signaling to them to sit down after they rose to greet him when he walked over following a wreath-laying ceremony to honor Holocaust victims.

Biden took the survivors’ hands and kneeled between them. He spoke with the women for about seven minutes, kissing both on their cheeks as their conversation drew to a close.

“He told me about the importance of Holocaust education and called us heroes,” Quint told JTA after the conversation, which was largely inaudible to the reporters in the room amid the shutter clicks of the assembled photographers.

Quint, who was 3 when the Nazis invaded her native Poland and who survived the Holocaust pretending to be a boy at a labor camp, said she did not tell Biden much about her experience during the genocide, in which her parents were murdered. Rather, she spoke about how immigrating to the United States in 1946 had shaped her life.

“It’s a closing of a circle. When I arrived in the United States I was a scared little girl, I was 11,” she said. “And now I’m meeting the world’s most important person.”

Quint recalled her immigration to New York City as the adopted child of another Holocaust survivor. Her adoptive mother died three months later of illness she had contracted at a Nazi concentration camp, and Quint was again alone in the world.

But a Jewish couple who could not conceive children adopted her and raised her, encouraging her to study and obtain a master’s degree in education. She moved to Israel in 1984 with her husband, whom she met back in the United States and with whom she has four children.

She has worked and volunteered at multiple educational frameworks, including Birthright, an organization that brings young Jews from the Diaspora to Israel, and at Yad Vashem, which asked her to attend the visit and meet Biden.

Cycowicz was born in what is today Ukraine and survived the Auschwitz-Birkenau death camp before being reunited with her sister and cousin after the Holocaust. She also moved to the United States, in 1948, then to Israel, arriving on a student exchange program in 1955 and staying to marry and raise three children.

At the age of 56, in the 1980s, Cycowicz decided to resume her studies, which were cut short because of the Holocaust. She obtained a PhD in psychology and volunteers to this day with other Holocaust survivors, helping them work through their trauma.

In the visitors’ book at Yad Vashem, Biden wrote: “We must never, ever forget because hate is never defeated, it only hides.” PJC