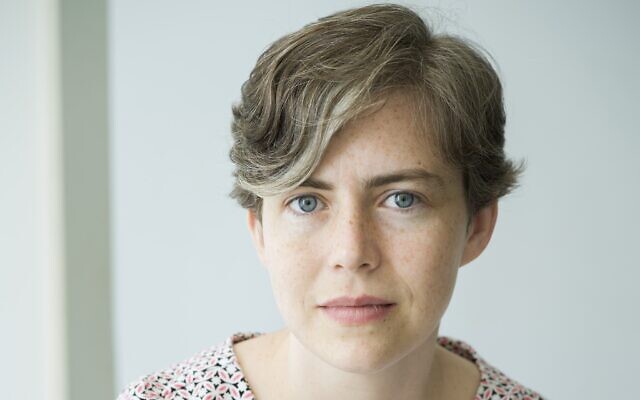 Feeling “trapped” after the 2016 election inspired Sarah Blake to write her first work of fiction, “Naamah: A Novel,” about Noah’s wife.

After the election of Donald Trump, the idea of writing about a woman stuck in the middle of a flood sent to destroy the world, and being forced to care for her family while tending to an ark full of animals resonated with the author.

Blake will appear virtually Wednesday, Jan. 20, as part of Congregation Beth Shalom’s Speaker Series. The free program is presented by Derekh, the Edward and Rose Berman Hillel Jewish University Center of Pittsburgh, the Jewish Book Council and White Whale Bookstore, and is underwritten by Seth Glick and his wife Carolyn Slayton.

Naamah is a minor character in the Torah — her name is only mentioned once, and not in relation to the story of the flood.
“There’s a lot of room left in that story, a lot left out,” Blake said.

In addition to the popular Genesis story, in writing her novel Blake also relied on the Book of Jubilees, an ancient Jewish work considered canonical by Ethiopian Jews and the Ethiopian Orthodox Church. It was from this lesser-known work, not the Torah, that Blake learned Naamah’s name as well as other details, such as information on various moon cycles.

While the novel focuses on Naamah, Blake said readers will learn a lot about the lives of Noah and the couple’s sons and daughters-in-law. The story also depicts what it was like to care for the animals that joined the family on the ark — animals that continued to have baby animals during their time at sea.

Before writing “Naamah,” which was awarded the 2019 National Jewish Book Award for Debut Fiction, Blake published two books of poetry: “Mr. West,” a lyrical biography of Kayne West and, as part of the Wesleyan Poetry Series, “Let’s Not Live on Earth.”

It was through poetry that led Blake to find inspiration from Naamah as well as to other women in the Bible.

“I’d been writing poems where I was trying to reclaim some of the women that I’d been a little dismissive of as a child, women like Eve or Sarah,” whom she didn’t consider to be “strong, amazing women I identify with from other places in history. I wanted to go back as an adult and see why I’d been dismissive of these women. I’d been reading them through a certain lens and actually, there is another way to look at them that was more like the same kind of joy and empowerment I got from these other women.”

Blake, who lives in England with her husband and son, grew up in New Jersey in an interfaith family with parents who were atheists. Blake still identified culturally as Jewish, thanks to attending various life cycle events of Jewish family members. Now, she celebrates Chanukah at home and has taught her son about Yom Kippur and Rosh Hashanah.

The hardest part of the book to write, she said, was the eventual discussion between her protagonist and God, an event she acknowledges didn’t take place in either the Torah or Book of Jubilees.

“It was the most intimidating part of the book,” she said. “I knew the whole time I was writing towards it but didn’t know how I would write once I got there. It’s still intimidating when I look back but I’m always relieved when I reread the passage. I’m like, ‘I did OK.’”

This year, in addition to Blake, Beth Shalom’s Speaker Series will feature Neal Bascomb, author of “Faster: How a Jewish Driver, an American Heiress, and a Legendary Car Beat Hitler’s Best”; Ariel Sabar, author of “Veritas: A Harvard Professor, a Con Man and the Gospel of Jesus’s Wife”; New York Times bestselling author Janice Kaplan, who will discuss her work “The Genius of Women: From Overlooked to Changing the World”; and Talia Carner, author of “The Third Daughter: A Novel.”

Glick and Slayton founded the Speaker Series four years ago when they realized that Pittsburgh didn’t have a series highlighting Jewish Book Council authors.

“We wanted to create a series that we would want to attend,” Glick said, who worked in the book business for over a decade.

Typically, speaker series authors are chosen at a three-day event in New York sponsored by the Jewish Book Council, Glick said. This year, due to COVID-19, authors presented their works on Zoom.

“It was definitely harder,” he said. “Being able to talk to them afterwards is a large part. Most people have some Pittsburgh tie, which makes an immediate bond. You can play the whole Squirrel Hill, Jewish geography. In person, you get a flavor for what their presentation is going to be like. And on Zoom, so much of that is lost. It almost feels a little more rehearsed and distant.”

While the pandemic may have made the selection of authors different from previous years and forced the series online, Glick and Slayton think there may be a silver lining in the cloud.

“It gives a chance for people from all over the world to attend these events,” Glick said. “Because it’s free and open to the public, we really hope that word spreads and people from outside of Pittsburgh attend.”

As for Blake, she understands the desire to find solace in a good book as an escape from an anxiety-laden world.

“What I learned most from Naamah,” she said, “is that we deserve the escape we crave.” PJC