“This was one area we needed to enhance, and we’ve accomplished that and it means so much,” said Firestone.

Beth Shalom began looking for a development director in 2020, just after the pandemic began. They met Shugerman in the fall.

“Rabbi Andy is very personable,” said Firestone. “He will enhance our mission and we’re very excited to welcome him into our community.” 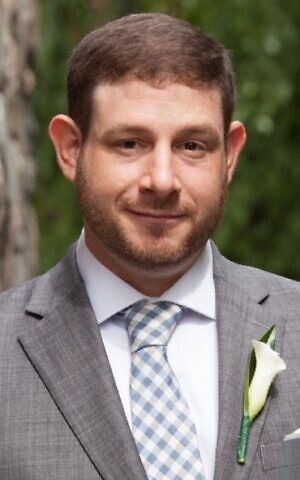 Born and raised in Washington, D.C., and currently living in Brooklyn, Shugerman, 43, is the former executive director of Federation of Jewish Men’s Clubs, an arm of the Conservative Masorti movement.

Shugerman has served as a development consultant and teacher at the Jewish Theological Seminary and director of major gifts at the United Synagogue of Conservative Judaism.

“We have lots of priorities for our development director,” said Turkewitz. “There are a lot of different fundraising projects — our legacy circle, as well as other financial projects for the ongoing financial sustainability of the synagogue.”

In his new role, Shugerman will address the needs of the congregation’s nearly 100-year-old building, while connecting to an evolving congregation.

“Our synagogue’s demographics are changing,” said Firestone. Given the number of younger families, it’s important to have “a younger person working in the capacity of development.”

There’s a certain novelty to having a congregational development director who is also a rabbi, but both Turkewitz and Firestone said Shugerman’s ordination is independent of his responsibilities at Beth Shalom.

“The fact that he is a rabbi is irrelevant,” said Turkewitz. “We were not looking for a rabbi. We were looking for the best person to do development work. He just happens to have semicha. He is coming in to do a certain set of tasks.”

For Shugerman, “serving as a rabbi, teacher and fundraiser all flow one into the other,” he said.

“It's all about relationships and building relationships with Jews and their Jewishness, which isn't necessarily about their Judaism. There are plenty of folks who are, as you probably know in the Pittsburgh community, diehard Yinzers who don't believe in God or aren't particularly observant but love learning and love connecting with other Jews through learning and supporting the future of the Jewish people — and that future is through education and community building.”

Shugerman, a married father of one, will start his new job remotely on April 16. He has gotten to know Rabbi Seth Adelson’s essential work at Beth Shalom from his sister-in-law, Rachel Kranson, a Beth Shalom member.

“To see him serve as the rabbi for my extended family in Pittsburgh and to see him officiate my niece's bat mitzvah, I really got a sense of how special he is in the life of the Beth Shalom community,” said Shugerman, adding that Adelson has a “great reputation” in the field. “I have been really moved by his presence.”

Shugerman said he’s extremely excited to aid both staff and lay leaders in the critical work at Beth Shalom and looks forward to developing new and meaningful relationships in the service of philanthropy.

“People want to support efforts that advance their interests,” he said. “When you build a relationship, and then you give somebody an opportunity to give money to a cause they want to see successful, is when they thank you,” said Shugerman. “Being thanked for helping people to do that mitzvah is just priceless. It’s so much of the fuel that keeps me going.” PJC