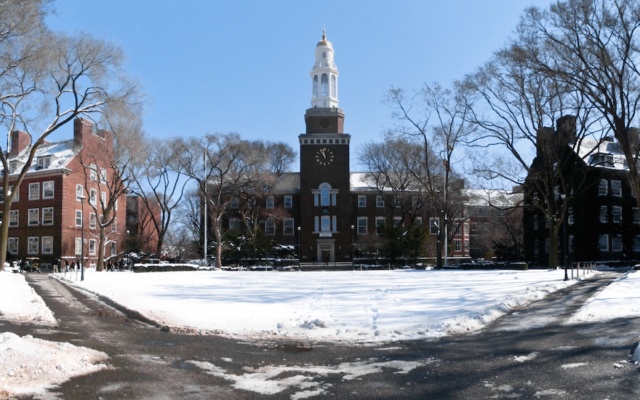 The East Quad at Brooklyn College, which is part of the CUNY system. (Wikimedia Commons)

(JTA) — At least 50 professors at the City University of New York have quit their union following passage of a resolution condemning Israel.

The New York Post on Sunday quoted James Davis, president of the Professional Staff Congress, as saying that the professors have quit in the wake of the resolution or signaled their intention to do so. The union represents academic staff at CUNY.

Davis suggested that there was an effort to bring back the disaffected professors.

“We are in active dialogue with members who have expressed concern over the resolution,” he told the Post.

The resolution, which was passed June 10, was introduced in the wake of the Israel-Gaza conflict the previous month and referred to Israel’s “establishment as a settler-colonial state in 1948″ — language often used to reject Israel’s existence as a Jewish state. The measure describes the events leading up to the renewed fighting in May and during the conflict only in terms of Israeli attacks without referencing Hamas attacks on Israel.

Hamas, the terrorist group that controls the Gaza strip, launched the Gaza portion of the conflict with a barrage of rocket attacks on May 9.

The resolution also calls on the union to consider joining the Boycott, Divestment and Sanctions movement against Israel.

Yedidyah Langsam, the chairman of Brooklyn’s College’s Computer and Information Science Department, launched the appeal to other faculty to resign from the union. He said the resolution made Jewish faculty feel unsafe.

“By endorsing this resolution you have made many Jewish faculty and students uncomfortable with being associated with Brooklyn College and CUNY to the point of fearing for our safety,” he said in a letter to Davis quoted by the Post. “Have you and your colleagues forgotten the exponential increase in anti-Semitic attacks against Jews in the NY City area?”