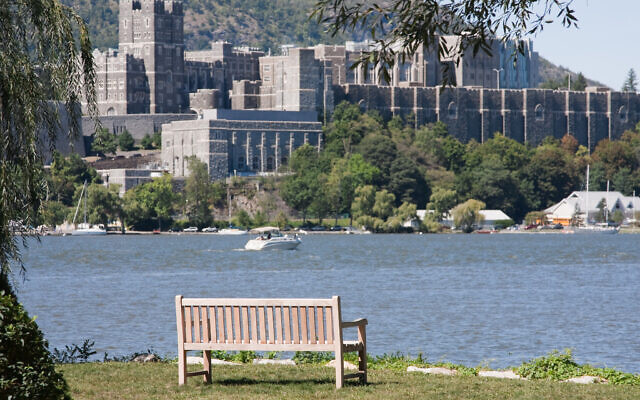 When West Point graduated its 1,000th Jewish cadet Saturday, it was more than a historical moment.

For the 12 Jewish cadets graduating this year out of a class of 980, and the hundreds of Jewish alumni before them, this milestone shows how much Jewish life has grown here since the military academy’s 1802 founding.

The achievement came amid another first for the academy — this year’s graduating class became most the diverse in West Point’s history, with a record-setting 34 African American women receiving their degrees.

When 2nd Lt. Noah Carlen, 22, came to West Point four years ago, he found himself in the unique position of living with two roommates who had never met a Jewish person. For someone who grew up in Newton, Massachusetts, which has a large Jewish community, it was an eye-opening, but not unpleasant, experience.

In fact, it inspired the former Boy Scout — and only student from his high school to attend a service academy — to engage with his academy’s small Jewish population.

“Here you don’t have to choose between being Jewish and being American,” said Carlen, who is branching into Air Artillery Defense and will be posted in Korea.

The U.S. Military Academy, or West Point, has always accepted Jews. Indeed, the first graduating class of 1802 was 50% Jewish — though the class only consisted of two students total. Over the next century, one or two Jewish cadets usually attended every few years. The numbers increased in the 1940s, when between five and 10 attended annually.

But while the number of Jewish cadets increased, Jewish life didn’t begin flourishing here until the recent past.

“It wasn’t hard in that you got a hard time for being Jewish. It was hard in other ways. For example, you had to go to services on Sunday. Sometimes a rabbi would come from the city, but usually not,” said Joel Kampf, who graduated in the class of 1959.

Unlike now, in Kampf’s time all cadets with a religious affiliation had to attend a worship service at least weekly — except Jewish cadets didn’t have a chapel of their own. Numbering just 70 out of 2,400 total cadets, Kampf and his coreligionists used the Catholic chapel, draping the Christian icons with cloth and frequently reading Torah among themselves.

In 1982 Kampf launched the West Point Jewish Chapel Fund, an independent organization of Jewish grads and non-grads. Together they raised over $7.5 million to build a chapel for the growing number of Jewish cadets. It was dedicated in 1984.

Situated on a hill surrounded by leafy trees, the white stone chapel, which also serves as the academy’s Hillel, commands a view of the Hudson River.

In addition to the sanctuary, there is a library, and along one wall in a blue-carpeted corridor are affixed 1,000 sparkling brass nameplates — one for every known Jewish cadet to graduate West Point.

The first is Simeon Magruder Levy. The son of a fur trader and speculator, Levy joined the U.S. Army in 1790 at the age of 16. Records indicate he distinguished himself during the Battle of Fallen Timbers in 1794. Levy died in 1807, possibly of yellow fever.

There is a nameplate for David “Mickey” Marcus, class of 1924, who parachuted into Normandy on D-Day and then went to Israel to help transform the Haganah into a regular army during the 1948 War of Independence. There’s also Lt. David Bernstein, a 2001 West Point graduate who was killed in Iraq in 2003.

“Once the chapel was here you knew you were recognized as a Jew,” Kampf said.

Today there’s also a Jewish Cadet Choir, whose members include Jews and non-Jews, along with the West Point Hillel. Each year cadets participate in Warrior Weekend with Hillel groups from the other service academies and ROTC (Reserve Officer Training Corps) programs. The cadets also engage in community service, from sending Hanukkah care packages to deployed troops to helping paint schools in Brazil.

“The biggest thing about Jewish life here is the sense of community. Being Jewish in America is about community and being together. We try to do that here. We have barbecues, music and movie nights. We get together to watch the Super Bowl,” said Capt. David Ruderman, West Point’s rabbi.

Beyond social events, Ruderman said the cadets are encouraged to take leadership roles in the Jewish community on campus and on future postings beyond West Point.

Today, cadets, faculty members, local Jews and members of the Jewish War Veterans of the United States of America attend Shabbat and High Holiday services in the airy sanctuary.

“During basic training it was a place of solace, a place to relax,” said 22-year-old 2nd Lt. Joshua Fernquist.

It also became a place for Fernquist, who grew up Reform in West Bloomfield, Michigan, to explore Judaism in ways he hadn’t previously.

“There was no pressure here, but I am more in touch with Judaism. I wrapped phylacteries for the first time — the rabbi taught me how,” he said.

Fernquist, who is branching into aviation and will be posted to Fort Rucker, Alabama, said the academy’s Jewish community drew him in because it’s so close-knit.

That sense of closeness remains over the years, as evidenced in the gentle ribbing between Kampf and Robert Rosencranz, who graduated with the class of 1961.

Kampf and Rosencranz teased each other about who had more endurance standing on the parade ground during the alumni parade held a few days before graduation.

“You guys were dropping like flies. The trick is to not lock the knees. Maybe you want a chair to sit down in,” Rosencranz said, gesturing to one of the chairs in the library.

“I’m fine. And we were told we had the most perfect marching,” Kampf said.

The reasons students choose West Point vary, just as university choices do for the broader population. Some, like 2nd Lt. Rachelle David, knew from the time they were young that they wanted to serve in the Army. The 22-year-old was raised Orthodox in Great Neck, New York, and attended yeshiva day school.

After graduation, David, who is branching into engineering, will have 57 days’ leave before she reports to Camp Humphreys in Korea.

Cadets receive a free four-year education, and then serve for five years in the Army upon graduating.

“There is a strong Jewish life here, but it’s not possible to be completely observant. I can keep kosher easily because I’m a vegetarian, but kosher meat isn’t available,” David said.

There are kosher meals, ready to eat — or MREs, as they are known in military parlance — for those who want, though no one really wants to eat MREs for four years, David said. There are also classes and training held on Saturdays, so Shabbat observance isn’t possible.

Other Jewish cadets, such as Fernquist, hail from military families.

Fernquist’s grandfather was an NCO in the Navy and served in Korea and Vietnam. Fernquist’s older brother also went to West Point, as well as his younger brother, who is in his second year at the academy.

Jewish Americans have served in the U.S. military since before the Colonial era. Representing about 2.2% of the population nationwide, they account for about one-third of 1% of the U.S. military, said Anna Selman, the former program director and public relations coordinator for the Jewish War Veterans of the USA.

Today, about 10,000 Jews are serving in active duty forces and 5,000 in the National Guard and Reserves, according to a 2017 survey done by the JWB Jewish Chaplains Council.

Rigorous, both academically and physically, West Point is also cocooned from the increased anti-Semitism and challenges facing American Jews beyond the academy’s perimeter.

The cadets gathered in the corridor acknowledged that West Point has been a haven from the anti-Semitism that students on other campuses face.

“We haven’t experienced it here, but of course we’re aware what’s happening. We might live in a bubble, but we don’t live under a rock,” Carlen said.

This year, West Point will be sending forth 12 young people who will serve as leaders in the Army and in the Jewish community as a whole, Ruderman said.

“They will combat anti-Semitism by virtue of what they are doing with their lives. They will be taking care of people and serving people,” Ruderman said.

That service is evidenced in the shadow box containing the names of all the Jewish Medal of Honor recipients, dating back to the American Revolution. It’s evidenced in the work of Rosencranz, who is chair of Veterans Moving Forward, which provides service dogs to veterans with PTSD. And it’s evidenced in the continued engagement of West Point’s Jewish alumni.

Standing just outside the chapel’s entrance, Terry Bresnik, class of 1969, and president of the chapel fund, spoke with The Times of Israel.

“I get a lot of nachas [pride] standing here,” he said. pjc