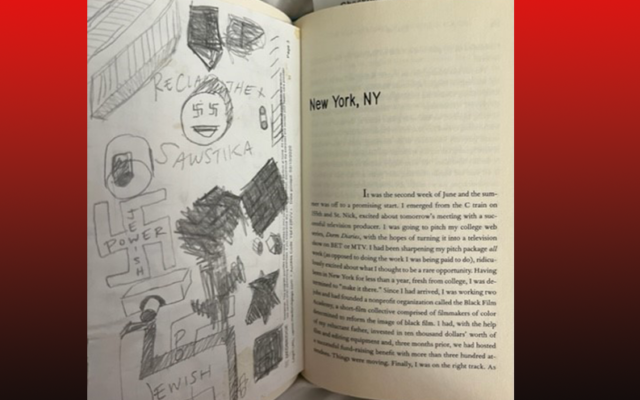 Chelsie Hart was jarred and concerned to find antisemitic images in a book she recently borrowed from the Carnegie Oakmont Library. Photo provided by Chelsie Hart.

Chelsie Hart said she was jarred and concerned after a recent trip to the Carnegie Oakmont Library.

Hart ventured to the library to pick up Issa Rae’s “The Misadventure of Awkward Black Girl,” a title sent to the location as part of the interlibrary loan system. Inside, she found handwritten pages filled with antisemitic drawings and phrases inserted into the young adult novel. Swastikas, the Star of David, “Jewish Power” and “Reclaim the Sawstika” covered two pages. 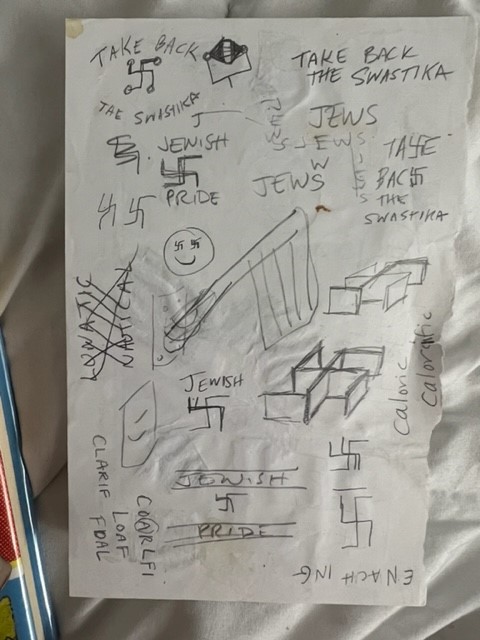 Knowing the book was transferred from another library, Hart wondered how many people had opened it before she did, she said.

The 33-year-old Plum resident initially reported the incident to the library, but was unhappy with the response she received, she said. So Hart, who works as a minority mental health advocacy and therapy readiness professional and photographer, took to social media asking her followers for advice. Several suggested she report the incident to the media.

She spoke with Duquesne University classmate Talia Kirkland, who told the story on WPXI. Shortly after the report aired, Hart spoke with the Oakmont library’s director, Beth Mellor.

“She was super-responsive,” Hart said. “She let me know the steps the library was taking and said she would keep me updated about things.”

Mellor said was shocked and angry when she learned about the hate images and phrases inserted into the book.

“Shock that someone would do this and put it in a library book that was distributed, and angry that it happened at all,” she said. “It was very upsetting.”

Mellor said the book was shipped to the Oakmont location from Carnegie Library’s Woods Run branch, and the page could have been added to the book anywhere along the line. She noted that if the pages had been slipped into the front or back of the book, the library staff would have found them as part of their typical handling of the book.

Mellor said when she was alerted about the hate language in the book, she immediately reached out to all 46 libraries in the Carnegie Library of Pittsburgh and Allegheny Country Library Association systems that are part of the interlibrary loan system. 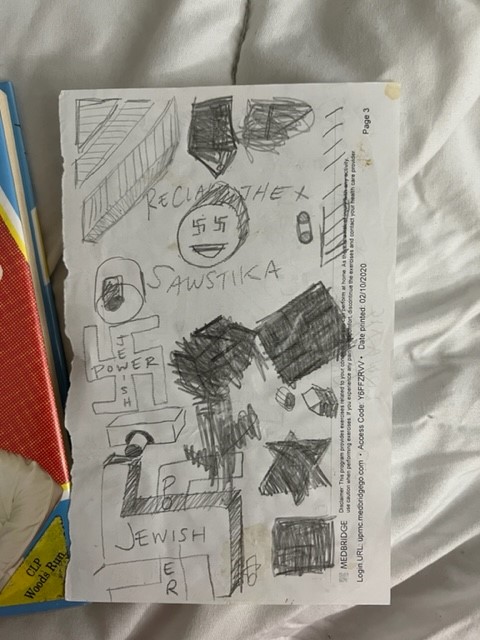 Library Director Beth Mellor was shocked and angry to see the images inserted into the book “The Misadventure of Awkward Black Girl.” Photo provided by Chelsie Hart.

“We’re all connected. We’re a community. We need to know what’s going on. They passed the information along to their staff and boards,” she said, adding that all of the libraries and their staff said they will look more thoroughly at books before lending them and when they are returned.

“We want to help create an awareness,” Mellor said, “so people keep an eye out and be more aware of things like this happening.”

Brokos said the Oakmont Library incident was an excellent example of “see something, say something” from outside the Jewish community.

“They reported it and expressed anger that something like this would happen,” Brokos said. “That resonated with me because hate symbols resonate whether you are Jewish or not.”

But for the spirit of community and the willingness to report incidents like this, Brokos said, “we would not be able to grow stronger and overcome these types of issues.”

Brokos said she wasn’t surprised to learn that hate symbols attacking one group of people were found in a book aimed at another minority community.

“I think anybody who is going to go to these lengths by putting these type of hate symbols in a book is looking to shock, and they’re looking for a reaction,” she said.

Hart said she was saddened to find the pages inside of a book by and about a Black woman.

“It seemed very strategic,” she said. “As somebody that deals in mental health and behavioral health, I know that thought becomes feelings, and feelings become actions.”

She said she hopes others will report incidents of hate when they see them.

“I just hope people understand that we all have to take a stand about things,” she said. “We all have to say things about hate speech. We all have to decry these things We can’t let this just happen, especially in Pittsburgh where we’ve already seen hate rear its ugly head.” PJC