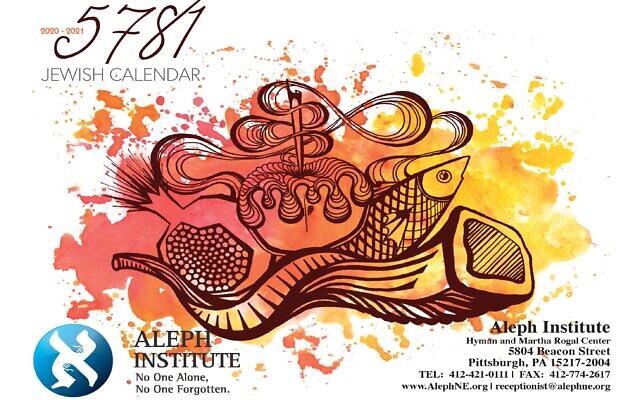 The Aleph Institute has provided calendars for Jewish inmates that includes holiday, inspirational essays and other useful information. Artwork provided by Aleph Institute.

Last year, Passover was a disaster in the prison system, according to Rabbi Moishe Mayer Vogel.

As executive director of The Aleph Institute-North East Regional Headquarters, Vogel is responsible for overseeing outreach to Jewish prisoners in 28 state prisons, 20 federal prisons and 60 county jails in Pennsylvania. Aleph also serves many additional facilities in Ohio and West Virginia.

Neither Aleph nor the prisons were prepared for the scourge of COVID-19, which prevented Vogel and his volunteers from visiting prisoners or assisting with seders in 2020.

This year, though, Aleph is prepared — despite the fact that the nonprofit’s volunteers and rabbis remain unable to host in-person seders at the facilities.

Holiday items like horseradish and dried eggs have been distributed in individual packages, allowing prisoners to have what they need for seders inside their cells, Vogel said. The packages also include a packaged chicken bone from Murray Avenue Kosher to be used in place of a shank bone, which potentially could be used as a weapon.

Aleph makes sure the Jewish prisoners have a seder plate as well as access to an electronic workbook that includes a simplified Haggadah with the necessary prayers and blessing.

“It’s not the same as getting together with your coreligionists, sitting in the chapel and celebrating Passover together, but it is what it is — the nightmare it is,” Vogel said.

Aleph also has distributed a calendar that includes a list of all the Jewish holidays, kosher laws, candle lighting times and words of inspiration and essays on a variety of Jewish topics.

Last year, the Jewish Federation of Greater Pittsburgh and funding from individual community members helped offset the additional costs of having to provide supplies for individual seders. Vogel ordered supplies for this year’s seder in November and is hoping to receive donations to help recoup the increased costs.

Though it may seem an ironic lesson to teach in a prison system, Vogel said the message of Passover is that of freedom.

“The freedom we received when we went out from Egypt was an eternal freedom,” he said. “We went from a slave mentality to a freedom mentality. Therefore, we have to know that wherever we are, we’re free, even in a prison system.”

Ultimately, Vogel said, everyone can bring more Godliness and light into the world — even in a dark prison.

“We might be imprisoned,” Vogel stressed, “but we’re not enslaved.”

Those type of messages have been difficult to deliver over the last year, although Vogel and other rabbis did what they could to reach Jewish prisoners. Since COVID-19 required the lockdown of all prisons, rabbis have recorded inspirational messages available for prisoners to watch, either on individual TVs they are able to purchase, or on group TVs dedicated to the service.

Vogel knows that those types of offerings are only stop-gap programs until he and his volunteers can visit the prisons again. That goal became closer in the federal prison system last month when Aleph representatives — including Vogel’s son — were allowed to read the megillah on Purim in person.

Vogel is confident more COVID-19 restrictions will be eased at both the federal and the state levels soon.

“Our hope is that in a month or two, after the masses have been vaccinated, we will be able to go in and like the rest of society return to a level of normalcy,” he said.
.
The Aleph Institute hopes to recruit additional volunteers who can spend an hour a month visiting prisoners. Since all volunteers must be approved and trained before they can begin visiting prisons, Vogel urges those interested to reach out to him in the coming weeks so that visits may resume in May.

“It is the biggest mitzvah in the Torah to take care of those we have to lock up,” Vogel said. “Unfortunately, sometimes we have to lock people up, but that doesn’t mean we forget them.” PJC