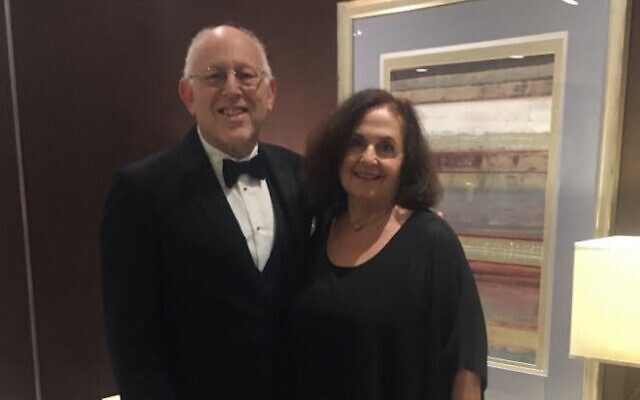 Remember that story about how a young Lana Turner, sipping a Coke in a malt shop, was discovered by a Hollywood reporter, leading to an iconic career in film? Harold Marcus has a similar story.

In 1981, when Marcus was a 30-year-old father of two, he lost his job after a reorganization at the private finance firm where he worked. One day, as he was eating breakfast alone in Bagel Nosh on Forbes Avenue in Squirrel Hill, in walked Bill Cohen, then Israel Bonds’ executive director in Pennsylvania. Cohen came over to say hello, having recently met Marcus at a birthday party for Cohen’s grandson.

He asked Marcus what he did for a living, and Marcus said he was looking for work. The rest, as they say, is history.

“I came to Bonds by accident,” said Marcus, who will be retiring after 40 years working for Israel Bonds in Pennsylvania. “It was a total change of career path.”

After graduating from the University of Pittsburgh, Marcus began his working life as a copy editor and proofreader for American Institutes for Research. The company eventually closed its Pittsburgh office and relocated its operation to California, but Marcus did not want to move his family west, so he took the aforementioned job in finance.

In 1981, when he met Cohen, Marcus had never even heard of Israel Bonds. But after Cohen explained to him the mission of the organization — helping to build the Jewish state’s economy through investments — Marcus was certain it was something he could do, and do well.

In the 40 years Marcus worked for Israel Bonds — the first 30 in Pittsburgh as a sales representative, the next 10 in Philadelphia as executive director of the Pennsylvania region —he was responsible for securing significant investments in Israel, including more than $300 million that stemmed from a chutzpadik letter he wrote to Warren Buffett in 2015.

When one of Israel Bonds’ longtime investors — an insurance company that had been acquired by Buffett’s Berkshire Hathaway — declined to reinvest as one of its sizable bonds was maturing, Marcus wrote to Buffett and asked for an opportunity to present his case.

“A week later, there was a message on my phone,” Marcus told the Chronicle at the time. “The message said, ‘This is Warren Buffett. I got your letter.’ It took me 10 minutes to get my jaw off the floor.”

That letter led to a series of events for Israel Bonds supported by Buffett, beginning with a dinner in Omaha in 2016 at which $60 million of bonds were sold — with Buffet buying $5 million worth on his own. Buffet enjoyed the event so much that he agreed to participate in three more.

“To say that was the highlight of my career, it was — in one regard,” Marcus said, but was quick to add appreciation for the “amazing lay leaders, colleagues and investors” he worked with over the years.

“When I say ‘investor,’ it doesn’t matter whether they’re investing $36 or $2 million — we have some of the most incredible clients with the highest Zionist ideals,” Marcus said. As a brokerage, Israel Bonds is nonpolitical, and has clients that span the gamut, “from the extreme right and the extreme left when it comes to Israel,” he said. “However, they all believe in one thing: You can’t not support the State of Israel, no matter which end of the spectrum you’re on.”

Marcus grew up in Stanton Heights and met his late wife, Maxine Cohen, when they were 15 years old. They were married at 20 and were members of Temple Sinai, where Marcus taught religious school for 45 years. Maxine passed away just a few weeks shy of their 37th anniversary.

In 2011, Marcus was promoted from sales rep to regional director of Israel Bonds’ Pennsylvania Region (which includes Pittsburgh). He married Maureen Wander Miller the same year, and they moved to Philadelphia, where the regional office is located.

But he is still a Pittsburgher at heart.

Marcus, 71, has decided to stay in Philly in his retirement, but he comes back to Pittsburgh frequently to visit his children and grandchildren and, up until last year, his mother, who died just six weeks before she turned 100.

While the decision to retire wasn’t easy, “because I love what I do, I’m still extremely passionate about what we do,” he said, Marcus and his wife are looking forward to taking some time to just enjoy life while they are “relatively young and relatively healthy.”

That will include traveling and spending time with family, he said.

Marcus’ last day at Israel Bonds will be Nov. 3, and he will be honored in Pittsburgh at an event on Dec. 9.
His successor will be Ari Sirner, whom Marcus hired in 2018 as an Israel Bonds sales rep in Philadelphia. Sirner left last summer to work for the Jewish Federation of Greater Atlanta, but got in touch with Israel Bonds and expressed interest in the job when he heard Marcus’ position would be available.

“He knows the organization, he knows how we operate,” Marcus said of Sirner. “As a successor, he will come in and assess the campaign and keep what he wants to keep and change when he wants to change. But I’ve no doubt he will do an excellent job.”

Looking back, Marcus marvels at the longevity of his career with Israel Bonds.

“If you would have told me, June 1, 1981, when I started that over 40 years from that day, I’d be retiring from this organization, I would have said, ‘You’re crazy.’ Looking back, you wonder where have 40 years gone. But I can honestly say there’s never been a day since June 1 of ‘81, that I’ve opened my eyes in the morning and said, ‘Do I really have to go to work today?’ Yeah, I’m very fortunate.” PJC

Toby Tabachnick can be reached at ttaabachnick@pittsburghjewishchronicle.org.