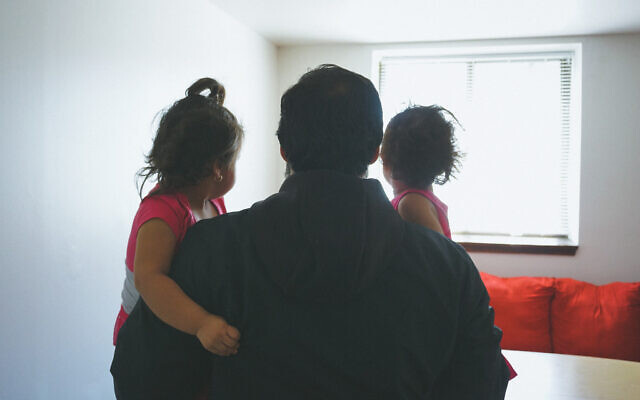 Niamatullah Popal holds two of his children. He didn’t want to show the faces of his family or have his wife photographed out of concern for their safety. Photo by Allie Reefer.

Niamatullah Popal, 35, was at his house recovering from an operation to mend a wounded leg when Kandahar fell to the Taliban.

The Afghan special forces officer knew his life was in danger.

He had one gun, a wife, 31, two children — ages 2 and 1 — and limited mobility. Despite the challenges, he understood he had to flee his home.

Popal is now safe in Pittsburgh, working with Jewish Family and Community Services, which is providing support for the Afghan refugee and his family. The trip to the United States, though, immediately following the collapse of Afghanistan, was anything but smooth for the family.

“It was very stressful for me,” Popal said. “I was frustrated. Looking at my situation, the terrorists had captured my area. I had a gun, but I thought I cannot make it with one gun. I’m wounded, I’m alone. I decided to take my wife and kids on a motorcycle and go to my aunt’s house which was still not captured.”

Popal explained through translator Zubair Babkarkhail that he relied on his ability to feign being disabled rather than injured, and possible empathy from soldiers, to get his family through any Taliban checkpoints.

“I thought because they are children and women, maybe they will have some mercy and not bother us,” he said.

Popal’s leg injury was only his most recent battlefield wound. He was shot in 2019 while on patrol, but his newest injury was far more serious than his first. In February 2021, he stepped on a land mine while on a mission and was shot in the chest as he lay bleeding. It was only because of his body armor that the bullet didn’t do more damage or possibly kill him.

It was while he recovered from surgery to mend his leg that the Taliban captured Kandahar and Popal fled.

The Afghan had spent 12 years working with the American government in Afghanistan, first as a watchman, later with his country’s special forces, assisting Blackwater and other U.S. companies.

Complicating his family’s escape was the Taliban’s tactic of turning off cellphone tower reception by 4 p.m. each day. Popal, a squad leader, knew that when he left, he would be unable to reach his commanders or anyone from his squad.

Despite the danger, Popal was able to reach his aunt’s home in a village not yet under Taliban control. His family spent the night there, and the next morning Popal received a call from his commander telling him that if they could get to the Kandahar airport, the U.S. could get him and his family out of the country.

On Aug. 23, Popal flew from Afghanistan to Qatar before arriving in Washington, D.C. on Aug. 27. From there, he and his family were sent to a military base in Wisconsin where they spent several months before arriving in Pittsburgh.

When he left Afghanistan, Popal and his family had only the clothes on their backs and essential papers, like passports. The family must now figure out how to make a life for themselves in the States. Popal faces at least one more surgery before his leg will be healed. Until then, he is unable to work. No one in the family speaks English.

The former soldier said his wife is uneducated and unable to work. He likewise has limited skills.

When Popal was a child, his father died, so he became a blacksmith to help support his family. When the U.S. took control of Afghanistan from the Taliban following 9-11, he went to work for the American government.

“In my life, I did two things,” he said, “killing and working as a blacksmith. I’m in a peaceful country now.”

Like other refugees, Popal has spent his time learning English and is anxious to work. For now, he is dependent on the assistance of JFCS, which has helped him find a home for his family and provide basics like food and clothing.

In an April 15 press conference, JFCS President and CEO Jordan Golin spoke about the process of helping Afghan refugees resettle in the states.

Golin said the agency was sometimes only alerted five hours before a refugee would arrive — a far cry from the usual timeline of two weeks, which allowed JFCS to help locate housing and employment in advance.

“We had to figure out where the family was going to spend the night, who was going to pick them up, where we’re going to bring them and how we were going to orient them to life in this country and the other services that go along with that,” Golin said.

JFCS settled 250 Afghan refugees in less than three months, according to Golin. By comparison, the agency typically resettles 200 refugees a year.

The contract JFCS has with the government is for three or four months for each refugee, Golin added. After that, the families are expected to be fully integrated into the community.

“We know that’s not really possible,” he said, “and will continue to work with them through support we receive from the country government and other sources.”

A recent $125,000 grant from the Mellon Foundation will help JFCS to provide emergency assistance for another group of incoming refugees: Ukrainians, who are fleeing their war-torn country. That grant will help pay for necessities for 75 people, such as food, clothing, rent, security deposits and utilities.

While Popal and his immediate family are safe, he said his extended family still in Afghanistan continues to face peril. They spend nights in different homes to avoid the Taliban. He considers their lives to be in danger.

Popal’s life in the States has already brought some joy: His wife recently gave birth to their third child. He would like to return to his ancestral land but isn’t sure when or how that will occur.

“I’m always thinking about one day going back to Afghanistan because that’s my homeland,” he said. “But not in the situation right now. That would be an ideal situation, going back. If there is peace and we are secure, I would go back. Right now, I don’t want to go there. I don’t want to take my kids back there. I have a life now. I’m a father. We struggled a lot. I don’t want my kids in that darkness again. They should live in peace.” PJC