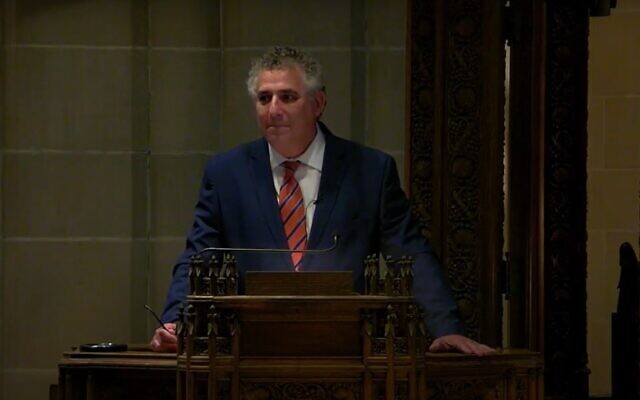 When he moved to Pittsburgh eight-and-a-half years ago, Rodef Shalom’s Rabbi Aaron Bisno was the first local clergy person of any denomination to reach out to the new priest.

“We got to know each other and developed a friendship,” Jensen said. “Calvary and Rodef Shalom had a long relationship with a pulpit exchange. My predecessor, Harold Lewis, and Aaron would trade pulpits and preach at one other’s congregation.”

And while Jensen’s friendship with Bisno might be the oldest, it isn’t his only relationship to the Jewish community.

After the 2018 Pittsburgh synagogue shooting, Jensen offered Tree of Life Congregation the use of Calvary’s building for High Holiday services, and over the past few years, he’s gotten to know the Conservative synagogue’s Rabbi Jeffrey Myers.

So, when Myers heard Bisno was on administrative leave from Rodef Shalom, he suggested Jensen reach out to his friend. (Bisno and Rodef Shalom have since worked out their differences, and he is now serving the congregation as its Frances F. & David R. Levin rabbinic scholar.)

The reverend asked the rabbi about his day-to-day activities away from the synagogue. When Bisno said he was meeting with people for coffee and working from home, Jensen felt that maybe they could be of assistance to one another.

The rector told Bisno that while he didn’t have a paycheck to offer, he could provide an office, an email address and a parking space. In short, he offered an opportunity to be part of Calvary’s staff.

“It’s helpful to have a place to go or a reason to get up and wash your face and comb your hair and go to work with people doing similar things — making the city a more just community and all, talking about how God is active in the lives of people in the world,” Jensen said. “I said, ‘Why don’t you be either chief guru or rabbi-in-residence.’”

In the end, the pair decided that Bisno would become Calvary Episcopal Church’s first rabbi-in-residence.

The new position is an opportunity to build on the relationships and ideas Bisno has been cultivating for a long time, the rabbi said.

“I think one of the blessings we have in Pittsburgh are the bridges and relationships that bind us together,” he said. “I look forward to exploring and creating and being part of the conversations that will result from what we’re starting here.”

The rabbi said he has been speaking of the need to collaborate — both inside and outside of the Jewish community — since 2011.

“This is, for me, a continuation of that work in the next phase of my rabbinate,” he said.

That idea is consistent with what Bisno told Jensen when they initially discussed the new position.

“He said he would work on several collaborative projects to bring the wisdom traditions of Judaism, Christianity, Islam and others to bear on the questions of the day,” Jensen said. “Everything from climate justice to gun control to more basic questions. What is a good life? What is truth? What is beauty? What does it mean to love and serve our neighbors? How do we know God is in the world today?”

There is historical precedence for this idea in the Judaism, Bisno said.

“The Talmud teaches that the one who is wise learns from all people. That requires us to recognize, with humility, that we don’t have all the answer ,” he said. “We don’t know all things. Our understanding requires us to learn from others. So, ours is a timeless challenge. In this generation, I feel it is imperative that we talk with people who are different from us, so we can find and discover what we share.”

Bisno delivered his first sermon at the church on July 3 and has another one planned for Sunday, July 31.

Jensen said the fall course will provide an opportunity for them to go back to their source texts and discuss everything from Roe v. Wade to the shootings in Highland Park, Uvalde and Buffalo. “What does the Bible say about these things? How do we come to actions and beliefs and faiths that we can live in the world today?”

The rector said the pair can serve as an example for people who see only a divided America.

“In some ways, we’re fundamentally different,” he said. “There’s no excuses. For example, I believe that Jesus is the Messiah; he does not. That is a really sharp divide. However, we also like each other and respect each other and agree on lots of things and understand and know we don’t have to agree on everything.”

For Bisno, Jensen’s invitation to Tree of Life to hold its High Holiday services in the church speaks to his fundamental goodness.

“Jonathon Jensen is a mensch,” Bisno said. “He sees an opportunity to extend a hand to a friend, he sees a need in the community, and he says, ‘What can we do here?’ This is what we’re called to do. That’s who he is. I’m proud to be able to contribute.” PJC