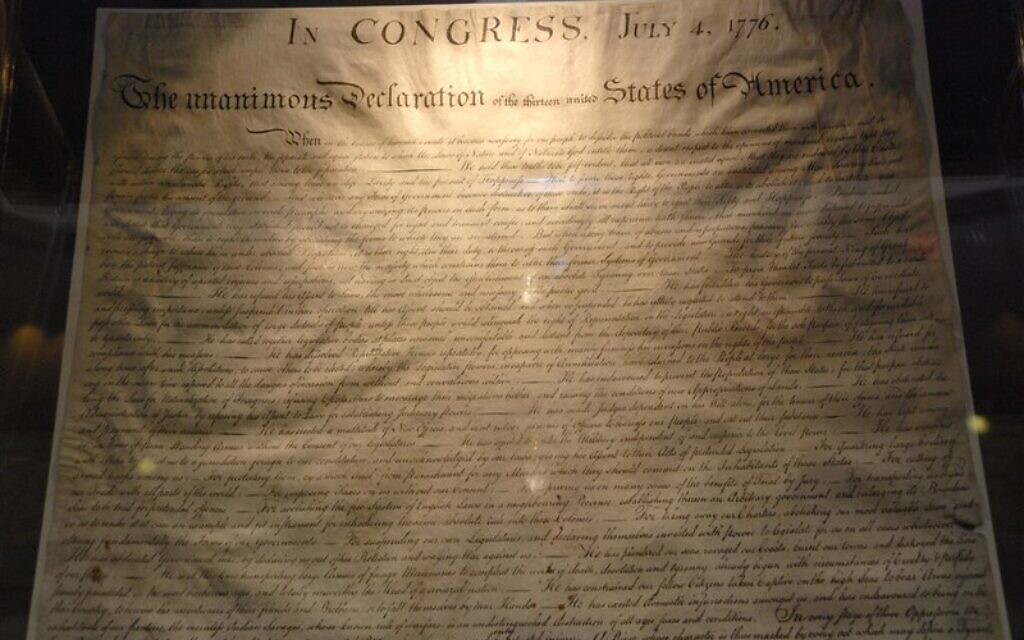 July Fourth is a challenging holiday for me. How is it possible to reconcile the beautiful sentiments about liberty and equality in the Declaration of Independence with the fact that its primary author and many of the document’s signers owned slaves?

I have experienced similarly conflicted feelings in synagogue. How is it possible to reconcile the God that commanded us to love our neighbor as we love ourselves with the Almighty who destroyed the world in a flood and killed every Egyptian first-born?

God’s inconsistent behavior as expressed in the Torah also troubled the revered theologian Rabbi Abraham Joshua Heschel. In his seminal book “God in Search of Man,” he grappled with this issue in a way that is applicable to my contradictory feelings about America’s origins.

Heschel’s book addressed the “serious problem of a number of [Torah] passages which seem to be incompatible with our certainty of the compassion of God.” Some Jews ignore these passages, or claim that criticism of Torah’s content is heretical. In my synagogue, Torah’s declaration that homosexuality is an abomination is chanted in hushed tones.

I wanted to lash out against God’s inhumanity. Yet, I did not know how to do so without jettisoning Torah as a whole — an option which would be tantamount to rejecting my heritage.

Heschel emphasized that God’s cruelty “… stands in sharp contrast with the compassion, justice and wisdom of [Torah’s] laws.” Rebelling against God when He violates these principles “[endows] us with the sensitivity that rebels against all cruelty.”

In seeking authority to dissent, Heschel looked to those prophets “… who dare to Challenge [God’s] judgement.” They included Abraham, who argued (unsuccessfully) against God’s plan to destroy Sodom; Moses, who talked God out of destroying the Israelites for worshiping the golden calf; and Job, who called out God for treating the righteous unfairly.

By holding up these prophets as role models, Heschel relieved me from thinking that rebellion was inconsistent with embracing my heritage. Registering disappointment when God failed to live up to His noble ideals elevated, rather than degraded, Judaism.

A similar dynamic defined my relationship with America’s founders. I revered them for envisioning a nation grounded in respect for inalienable rights, led by a government that derived its authority from its citizens. How these same men could be so blind to their cruelty angered and disappointed me.

These contradictions have led some Americans to reject the founders in full, while others claim that criticizing our beginnings is unpatriotic. My reading of history has forced me to struggle with the dilemma of identifying with a national heritage grounded in both the lofty vision enshrined in our founding documents, and the shameful values exhibited on the founders’ plantations.

Heschel’s depiction of the prophets’ rebelliousness against God as a path to arousing empathy, enabled me to comfortably hold my disappointment with Washington, Jefferson and their contemporaries, alongside my veneration for their foresight and courage. Their vision of a nation that enabled the pursuit of happiness, contrasted against the sinfulness of slavery, clearly illuminated America’s potential.

Arguing across generations with our forbearers, in order to fulfill their most noble aspirations, is a noble American tradition. Emulating their biblical counterparts, America’s civil rights prophets — from Abraham Lincoln and Frederick Douglas, to Martin Luther King Jr. and Lyndon Johnson — implicitly rebelled against the revolutionary generation’s sins by emphasizing the democratic spirit enunciated in their founding documents.

Rather than blasphemous, challenging the founders is a necessary step if we are to access Lincoln’s “better angels of our nature.” Lauding their accomplishments helps us to see and avoid their shortcomings.

No matter how we view our origin story, the Declaration of Independence and the sins of the men who signed it, represent the foundation of our country’s heritage. Similarly, the Torah — its good and bad — is the genesis of Judaism. By mirroring God’s biblical critics — by holding the darkness of America’s history against its light — we can honor our collective past, and use it as a springboard to a brighter future. PJC

Ben Krull is a lawyer and freelance writer, living in Brooklyn, New York.