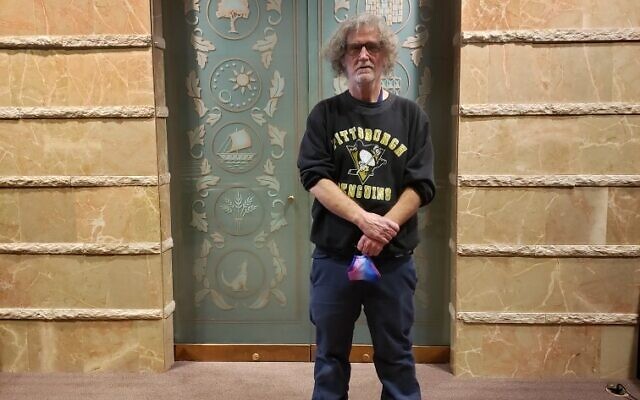 Every day at Beth El Congregation of the South Hills was a good day for Director of Maintenance Bill Stevens. Photo provided by Bill Stevens.

“Every day at Beth El is a good day.”

For 25 years, visitors to Beth El Congregation of the South Hills were answered the same way by Bill Stevens when they asked how he was doing: “Every day at Beth El is a good day.”

Congregation members and synagogue visitors heard the familiar refrain for the last time on Jan. 29. Stevens, the congregation’s director of maintenance, retired on Jan. 30 after making a quarter-century of memories.

“I was working at Baptist Homes in Castle Shannon and came here part time because my eldest daughter was going to college, and I wanted to make some money to help her,” Stevens recalled.

Within a month of taking the part-time position, Stevens was asked to join the staff full time.

“I left the nursing home to come here, which is the best environment in the world,” he said.

Beth El has provided a sense of family to Stevens. Last year, both he and his wife contracted COVID-19. Stevens recovered, but his wife died, and his friends at Beth El provided comfort.

As director of maintenance, Stevens serves as a jack-of-all-trades. A typical day, he said, might include cutting grass, shoveling snow and painting, as well as overseeing two employees.

Steve Hecht, Beth El’s former executive director who hired Stevens, described him as “a gentle man” who will be remembered for always saying yes to whatever was asked of him, no matter how much work might be involved.

“His work ethic is admired by all who know and love him,” Hecht said.

Stevens and Hecht developed a friendship over their 20-plus years working together, Hecht said.

“That is what I cherish most,” Hecht said. “Bill has become one of life’s mentors to me. His outlook was not only admirable, but infectious.”

Stevens found joy not only in his work but also in learning about Judaism.

“When I first came, I heard someone say ‘baby naming’ and I thought, ‘This baby is 6 months old, why hasn’t it been named yet?’ I’ve learned a lot about the Jewish religion in the background,” he said.

The South Hills resident said he’ll most miss interacting with the congregation’s members.

“I love these people like they are my own family,” he said. “It’s been really emotional for me.”

Those feelings are reciprocated in the Beth El community.

Ilene Cohen said Stevens ingratiated himself into her family’s lore during Thanksgiving 1997.

Each Thanksgiving, Cohen said, her entire extended family would gather together to celebrate — a tradition that extended back to 1921 when her great-grandfather, who immigrated in 1913, and his daughters were reunited in the United States.

In 1997, Cohen’s mother was ill but still wanted to celebrate the holiday with her family. A decision was made to have their meal catered and to host the dinner at Beth El. There was only one problem: an employee would have to be in the building during the meal.

Stevens was asked and initially declined. But when he learned that it was for Cohen’s mother, knowing how ill the matriarch had been, he decided to work on the holiday.

“He was willing to leave his family so we could all be together on Thanksgiving,” Cohen said. “He knew my mom was really sick.”

“I don’t think they make Bills anymore,” Greenbaum said. “They broke the mold. I’ve always said they could run the synagogue without me, and they did for a year before I got here, but they could not run it without Bill.”

Stevens knows every nook and cranny of the building, Greenbaum said, and he was a constant presence at the synagogue.

“I come in early in the morning and he’s here. I leave late at night and he’s here. He’s the most reliable person I’ve ever known,” Greenbaum said, before noting that he considered Stevens a true friend.

Stevens taught Greenbaum a valuable lesson when he first came to the congregation, the rabbi said.

“I was young, and I’d complain about having to get up and come to work,” Greenbaum said. “He corrected me and said that work was a privilege. He always looked at it as a gift. I started looking at the world in the same way. It wasn’t just lip service with him, he really believed it.”

Greenbaum said that Stevens was such a trusted member of the community that parents had no issue with him looking after their children, a claim Cathy Schuster confirmed.

When their youngest son, now 28, was 5, the family took two cars to the synagogue for Rosh Hashanah. After services ended the family split into their two vehicles to head home.

“When we got home, we realized that neither of us had taken our youngest son,” Schuster said. “This was before cellphones; we were in a panic. The synagogue didn’t answer their phone on yontifs. I remember making a terrifying ride back. I got there, there were no cars in the parking lot, everyone has gone. I go into the building and there is Bill. He and our son Ben are stacking chairs. I go up to Bill, and said, ‘I don’t know how we did this.’ He said, ‘I knew you’d come back for him.’”

Susan Seletz, Beth El’s president, said the congregation, which has been holding Shabbat services online due to COVID-19 concerns, hosted “A Shabbat to Say Goodbye to Bill Stevens” on Jan. 15.

“It was a very teary moment,” she said. “He really, really means a lot and has very much been part of the fabric of Beth El for 25 years.”

Seletz said that Steven’s care extended beyond the building.

“When my parents were still in their house,” she remembered, “they would go to Florida for a month every winter. They arranged with him, because he’s such a sweetheart. He would always go to their house if they weren’t there. He would shovel their driveway. He was always just taking care of them. He often volunteered to help people.”

Chris Benton, Beth El’s current executive director, said that Stevens’ retirement is a profound loss for the congregation.
“Beyond caring for the building and leading our custodial team, Bill has been part of our communal sorrows and simchas for over 25 years,” she said. “Personally, Bill has been a true partner as I began my role of Beth El.”

Stevens, 63, said he doesn’t have a game plan for the next few years but he and his grown children—two daughters and one son — think it’s the right time to retire.

While he might not be in the building daily anymore, Stevens said he’ll value the relationships he’s formed.

“I walked in here and after the first month I could tell you this was the place I wanted to be,” he said. “If you asked me if I knew I would retire from here, I honestly couldn’t tell you that, but this is my home. They treat me like family.” PJC

David Rullo can be reached at drullo@pittsburghjewishchroncile.org.