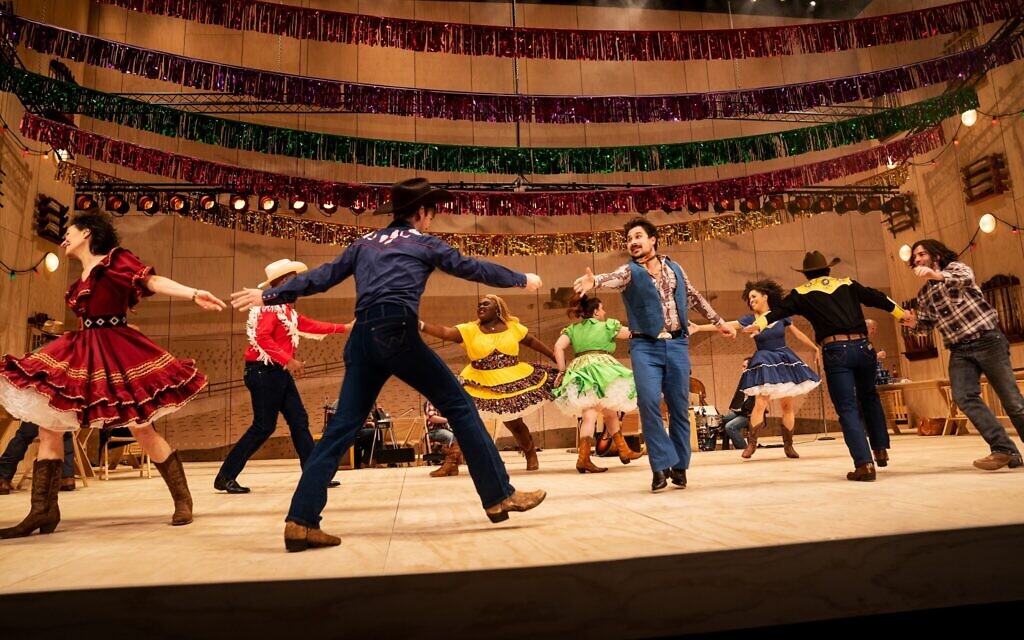 The company of the national tour of "Oklahoma!" (Photo by Matthew Murphy and Evan Zimmerman for MurphyMade 2)

When it premiered on Broadway in 1943, “Oklahoma!” was heralded as a theatrical trailblazer. The first major collaboration between Jewish composer Richard Rodgers and lyricist Oscar Hammerstein — whose father was Jewish — the show was credited for developing the “narrative musical,” which emphasizes a story with a distinctive beginning, middle and end.

The show’s 2019 Broadway revival was acclaimed as well, winning two Tony Awards, including Best Revival of a Musical. But its reviews were peppered with adjectives such as “dark,” “edgy” and “menacing.”

While the libretto and score of the show are intact, the new version of the show — whose national touring production opens in Pittsburgh at the Benedum Center on Jan. 4 and runs through Jan. 9 — lays bare undercurrents of danger while the “bright golden haze” shines on pre-state Oklahoma territory. 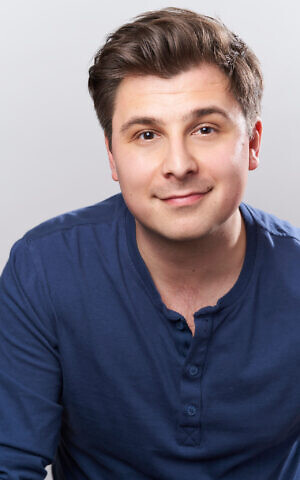 Benj Mirman (Photo by Alex Kikis)
Benj Mirman, who plays the Persian peddler Ali Hakim in the touring production, praised the new iteration of “Oklahoma!” as a fresh — but not flashy — take on a Golden Age musical.

“This is truly like opening the score and the first page of ‘Oklahoma!’ as if it is something that we have never encountered before,” said Mirman, who is Jewish and grew up in Columbus, Ohio. “It’s approaching the material with no preconceived ideas. Not, ‘How did it happen in the movie?’ or ‘How was it staged before?’”

The previous versions of “Oklahoma!” are “wonderful,” Mirman stressed. “There’s a reason why it’s ‘Oklahoma!’ — it’s part of the fabric of our country. So it’s exciting to take that thing that’s in our bones, and to approach it as something that is not in our bones.”

The revival, under the direction of Daniel Fish, “is a love letter to the source material of ‘Oklahoma!’ — which I think is really a profound piece of theater that gets overlooked,” said Mirman, who performed in a student version of the show in 2007 and in its professional workshop in 2015. “Essentially we are doing the text as written — performing and approaching ‘Oklahoma!’ not as if it is this antique that has to be handled with care, but as if it’s a new piece of theater.”

The production is “stripped down,” Mirman said, without a large traditional theater ensemble. Instead, there are just 10 actors on stage. And, in place of a full orchestra, there’s a seven-piece bluegrass band. The music has been “beautifully and meticulously reorchestrated by Daniel Kluger,” he said.

“The two things work so well together — having this smaller band and having the smaller cast,” Mirman continued. “The idea is that we are all in a big room together. So there’s no big sweeping set changes. For different chunks of the show the house lights are on, or in a very bright set. So it’s very much inviting the audience to feel like they are in a room with these performers, this community, who is telling their story.”

The show has a diverse cast in terms of “shapes, sizes, colors, creeds, ethnicities, gender identities,” Mirman said. “The bodies that are on stage are not what normally ‘Oklahoma!’ looks like. But it’s kind of what our country looks like today.”

Mirman, who is white, plays the character of Ali, who is Persian. The role is often portrayed by a white person “who puts on like, a strange schticky accent,” Mirman said. In his interpretation of the character, Ali simply “tells people he’s Persian so that he can seem exotic and sell things….he’s essentially just a traveling salesman who is trying to smooch some ladies and sell some stuff and get out of there. And to up his appeal, he says that he’s Persian. It is very much ideally, hopefully, a comic relief role.”

The “Oklahoma!” tour, which began in November, is Mirman’s first time back on stage since the start of the pandemic. Being able to perform again for a live audience is “incredible,” he said.

“The way that the show begins, the way we enter the stage — we just kind of all walk on stage to house lights. And it’s an emotional experience every time, to just have that ‘pinch me’ moment [after two years] of being able to truly walk on the stage and to greet an audience, and to know that hopefully, everyone is feeling this kind of almost surreal feeling of like, ‘Oh, gosh, we’re back doing it.’”

While some audience members have been disappointed that this production of “Oklahoma!” is unlike the 1955 film version, others are “really, really on board and incredibly thrilled and moved by this ‘Oklahoma’ that has been here the whole time,” Mirman said.

“I just urge and hope that people think about what the show is about, which is really how a community functions and the powers of community — both good and bad,” he said.

“I hope people come in with open eyes and open hearts and knowing that this production is handled with such love and care for Rodgers and Hammerstein and for the piece itself. And that things are different than the movie or the Hugh Jackman production that they watched on YouTube. I hope that people come in excited to see something that they maybe know and love dearly, and to see how it can be interpreted in a very modern, fresh way.” PJC