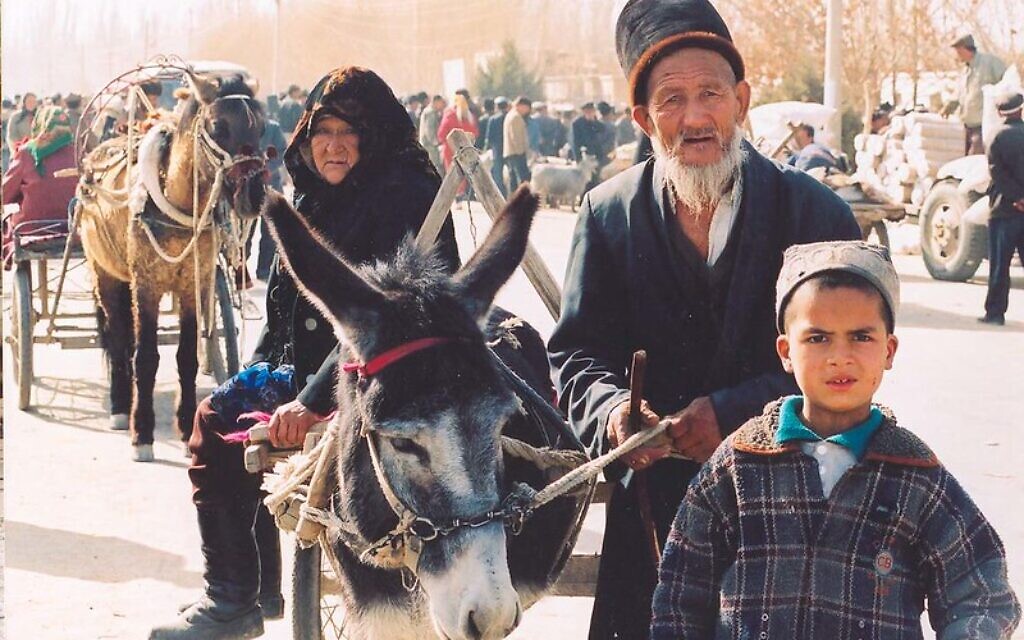 Elisha Wiesel believes the Chinese government's treatment of the Uyghurs deserves to be pushed back on during the Olympics. Photo by Todenhoff, courtesy of Flickr.com

On Friday, Feb. 4, my world was shaken. It hit me as though it were a fresh wound: My father, Elie Wiesel, was really gone.

It hurt terribly when he died over five years ago, on July 2, 2016. But I also found peace and awakening as I grieved. I had this sense from the very moment he passed that he would be with me always. Through his dreams for me, I felt that as long as I lived, he would too — as would my ancestors.

This feeling deepened over the years that followed. My year of Mourner’s Kaddish ended and I still found myself drawn to Shabbat peace, to morning tefillin, to the intentionality of a minyan gathered to pray, to the stories of our people in ancient texts. I felt the wholeness of history, of the chain of which he had always wanted me to feel a crucial part, which he so keenly felt himself. And although I miss him daily, I unfailingly find that thinking of him makes my footsteps feel sure.
But on Feb. 4 I had to stop and catch my breath as I realized the depth of my loss, our loss.

Because that day was the opening of the Beijing Winter Olympics, and millions were tuning in to the opening ceremony. Most of the world didn’t seem to know, or care, that the host country is hosting a pageant of “peace and friendship” while simultaneously terrorizing its Uyghur minority.

The Chinese government’s systematic oppression of the Uyghurs, a Muslim group in northwest China, is not the Holocaust. But although we may not have seen this particular movie, we know the genre.

I have heard the painful testimony of Uyghur dissidents, who manage to get the word out despite a media clampdown that makes it almost impossible for the Western press to report on the facts. Forced internment camps target people for thought crimes and racial affiliation. Medical data suggests that forced sterilizations are taking place among this targeted racial group. Families have been forcibly separated and threatened into silence.

Just like in 1936, the International Olympic Committee is unwilling to push the issue. And our community is mostly silent.
I saw 100 or 200 brave souls rally on a rainy Thursday in Times Square. In the gray neon light, the young leaders called on each other and passersby via megaphones whose batteries could not keep up with the urgency of the message: Turn off the Olympics, and close the concentration camps in Xinjiang.

It should have been the whole city turning up to honor their message.

I know now that we have failed my father in this regard. He did not fail us. He spoke of how he always felt he had to answer to the dead: Did he do enough? And yes. He did.

He was there to speak up against atrocities in Darfur, Bosnia, Cambodia, Rwanda. He tried with everything he had to tell us. And all the words he spoke and wrote could not change the fact that five years after his death, 1 million people are reportedly in concentration camps, because of their race and religion, in the grip of a totalitarian regime — a regime honored to host the world’s nations, on a global television platform that packages sports with advertising.

Today’s culture of workplace activism is highly developed. In corporations and small businesses across the United States, Black Americans and their allies, for one, showed with emotion how cries against police brutality could be heard in board rooms and executive suites.

But are men and women of conscience reaching out to their managers at the corporations that sponsor the Olympics? Are voices inside corporate America respectfully but insistently calling for company conversations about their responsibility when they hear survivors’ reports of genocide on the part of the Chinese government? If they are, they are not making themselves heard.
There are brave leaders, like Steve Simon of the Women’s Tennis Association, who canceled a lucrative tournament in China when the WTA’s demands for player Peng Shuai’s safety and freedom went unanswered. Natan Sharansky and Bernard-Henri Lévy, two leading Jewish intellectuals, signed an ad in The New York Times, organized by me and paid for by the Elie Wiesel Foundation, urging a protest of the Beijing Olympics; Jewish organizations across the denominational spectrum have spoken up for the Uyghurs; and Jewish World Watch is trying to generate widespread action around the issue.

But they are still too few. I fear that China’s state-sponsored capitalism has silenced us through our greed.

My father believed passionately that speaking up mattered, especially to the victims.

Have I, blessed to live in this country which stands for freedom, done enough?

“Shame on Xi Jinping,” shouted the determined young people in Times Square on Thursday night.
And I think: Shame on me, if we can’t find some way to help. Shame on us. PJC

Elisha Wiesel is the son of Marion and Elie Wiesel. This piece first appeared on JTA.