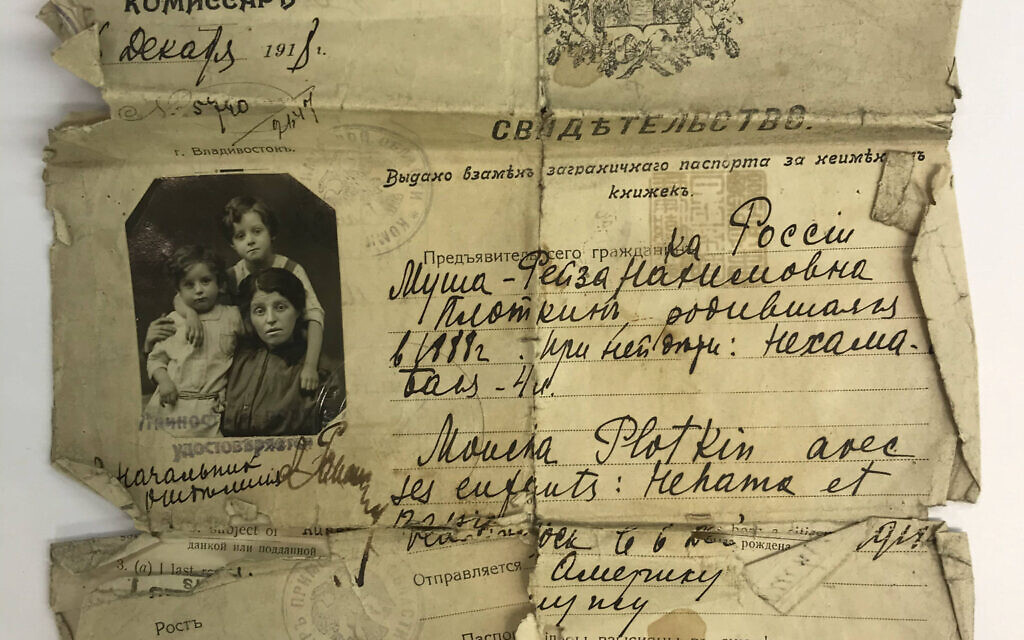 Musha Reiza Plotkin, and her daughters Nechama and Bassia, applied for refugee status in the United States on December 12, 1918. Nearly 100 years later, the Plotkins’ application, complete with surgical grade staples, photographs, foreign stamps and writings in multiple languages, made its way into the hands of Wendy Bennett, a Squirrel Hill-based paper conservator.

Plotkin’s descendants wished to preserve the application’s folded pinpricked leaves, and decided that Bennett, who is Jewish and a local expert in paper preservation, was the perfect person to do so.

After reviewing the materials, proposing a course of action and agreeing to a plan with Plotkin’s descendants, Bennett performed one of several surface cleans before removing the application’s thick fasteners. With the moderately soiled pages now separated, the conservator straightened the folds, aligned the tears and humidified each leaf. After drying and flattening, she mended the tears with conservation grade papers and adhesives.

Though not yet complete, the Plotkin application, with its cleaned photographs and repaired pages, is ready to take on new life. 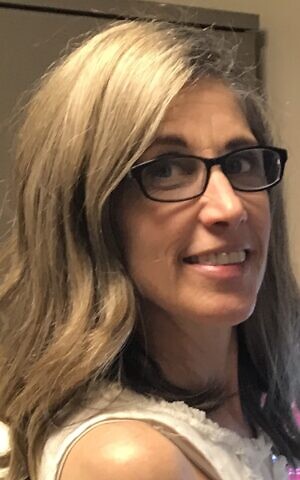 “I can’t wait to see it,” said Dee Selekman, Plotkin’s granddaughter. “After hearing about everything that’s on it, such as the stamps from the different countries, it will be interesting to look at it more closely.”

Years before Selekman and her daughter Aviva Lubowsky set out to conserve the application, Selekman had heard of her grandmother’s travels from Russia to the United States. Unlike other Jewish immigrants who crossed the Atlantic en route to Ellis Island, the Plotkins were among those who departed Yokohama, Japan and sailed across the Pacific before arriving at Angel Island Immigration Station, a 740-acre island in San Francisco Bay.

Between 1910 and 1940, Angel Island received 500,000 immigrants representing 80 ethnic groups, according to a report in the Jewish News of Northern California.

Another Plotkin family artifact, a January 1919 ship ledger from the Empress of Japan, an ocean liner built around 1890, denotes travelers whose last permanent residence includes Russia, China and Japan.

As a child, Selekman was told about the voyage. She hopes the newly conserved leaves will help future generations appreciate that narrative, too.

Prior to her days applying enzymes and gels to antiquated leaves, Bennett, a Taylor Allderdice High School graduate, studied the history of art and Asian studies as an undergraduate at the University of California, Berkeley. With a disinterest in academia, but a penchant for science, Bennett completed her graduate work at New York University, Institute of Fine Arts. 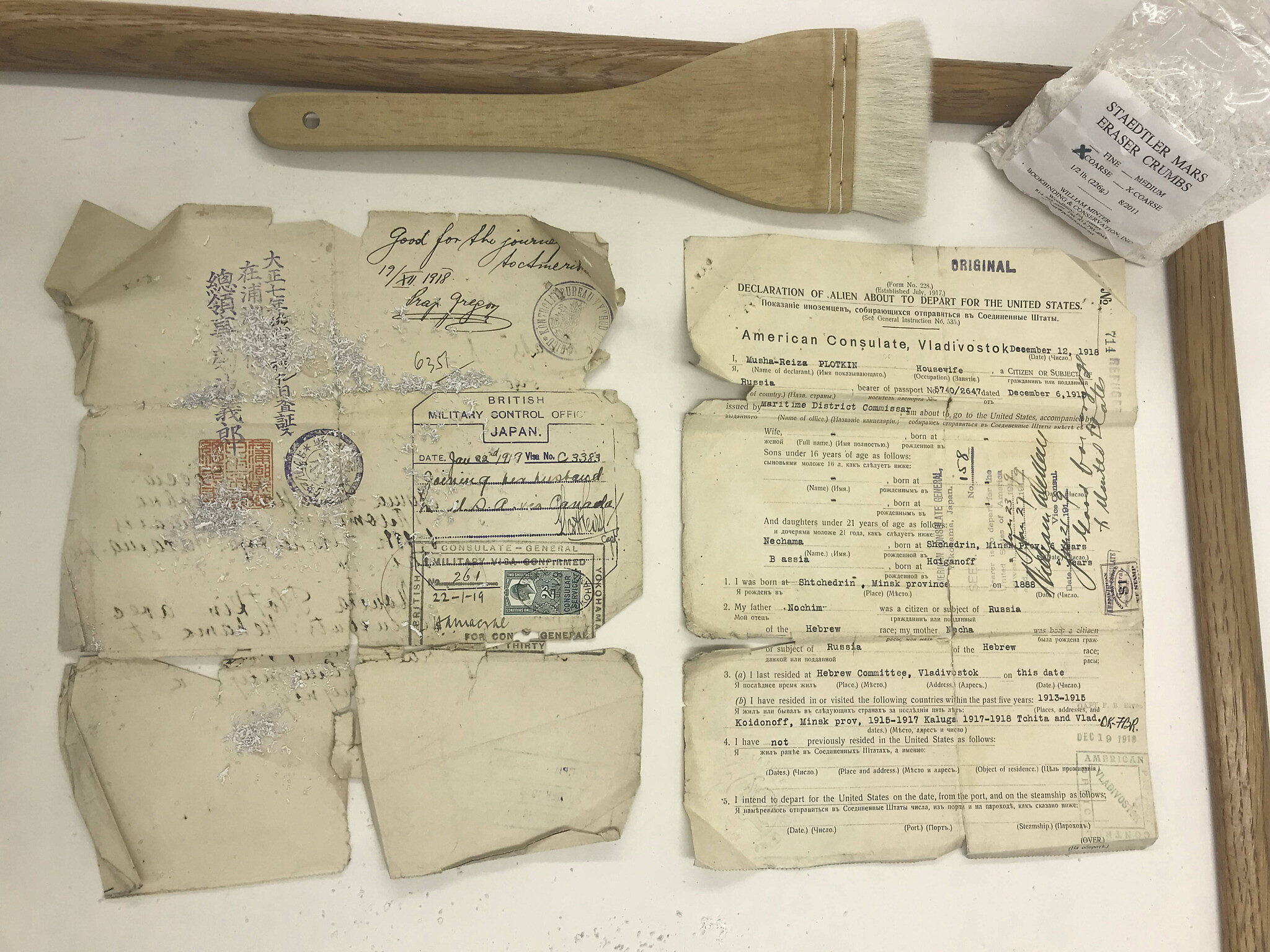 “I was very lucky to do my internship at the Metropolitan Museum of Art. I worked in the Asian Conservation Studio, and I got to treat 14th century and 15th century paintings on silk and paper. It was a privilege, and that informed the rest of my conservation work,” said Bennett. Learning not only the requisite procedures for treatments, but the “beauty and elegance, gave me a full appreciation for the materials I was using, and for the traditions that had been around for so many years,” she said.

In the nearly three decades since Bennett’s days as a graduate student, she has overseen numerous unique projects, many within her residential-based Squirrel Hill studio.

“Cleaning, humidifying, flattening and mending with Japanese paper and wheat starch paste are what I call bread and butter kind of activities for someone like me,” she said.

While document-specific labor is common, Bennett also works on fine art, such as drawings and watercolors. 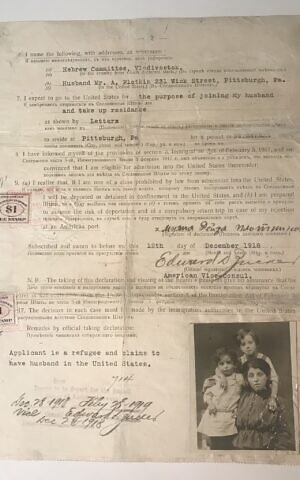 In Pittsburgh — unlike in New York City and other large global metropolitan areas, where the market enables conservators to specialize not only in oil paintings, but those of particular eras and styles — conservators are more “generalists,” said Bennett. Taken as a whole, however, “conservation is a very small profession, and that might surprise people or it might not.”

Perhaps less surprising is the question that has been a common refrain during her more than 30 years in the field: if something has faded can it be brought back?

In general, “if something has faded it’s because it’s been inappropriately displayed. It’s received too much light,” she said. The reason why a conservator can’t just “color in those lines again is because those lines were made by a printing press or those lines were made by the artist,” continued Bennett. “”If we do inpainting, it’s on an insert that we have put there, but we don’t overpaint. We don’t apply pigment or media overtop the original. That’s not considered a conservation best practice.”

A lot of people don’t like hearing “no” for an answer, but the paper conservator has a solution:

Place items that are light sensitive on walls that “don’t get as much light” and occasionally rotate pieces to other spaces so that “nothing is receiving too much light at any time.”

Education, like conservation, added Bennett, is just another means of “keeping things from fading.” PJC