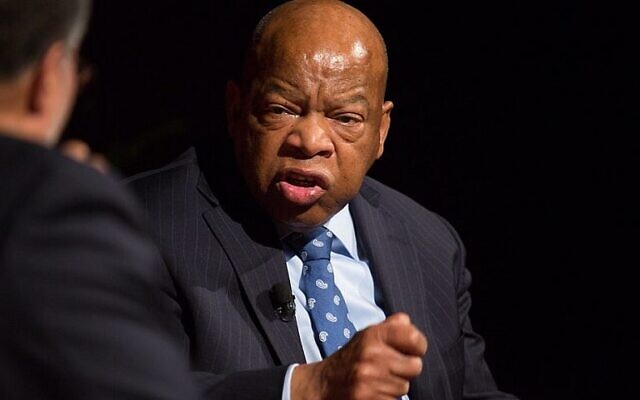 “Beloved” is an apt word to describe John Lewis. He was more than a member of Congress, more than a civil rights leader and more than a friend of the Jewish people. Lewis, the Georgia Democrat who died July 17 at the age of 80, possessed an unusual combination of strength, courage, modesty, empathy and love of his fellow man, all of which was on full display during a 60-year public career.

It took humility as the 23-year-old leader of the Student Nonviolent Coordinating Congress to temper the fiery speech he was planning to give at the 1963 March on Washington, bowing to civil rights elders to omit strident and confrontational rhetoric. Yet, he was still able to get his message across, with words of hope and the vision of a better world, to be achieved cooperatively, without resort to violence.

Few people would put themselves in harm’s way as he did at age 25, leading a group of peaceful marchers across the Edmund Pettus Bridge outside Selma, straight into the billy clubs of Jim Crow police that left him on the ground with a cracked skull.

Rabbi Abraham Joshua Heschel was on the Selma to Montgomery March as well, a connection with the Jewish community that Lewis maintained throughout his life. In Atlanta, where he was elected a member of the city council in 1981, he co-founded the Atlanta Black-Jewish Coalition with members of the city’s Jewish establishment.

While his empathy for the Jewish community never flagged, there were critics of some of his political decisions. He boycotted Prime Minister Netanyahu’s speech to Congress in 2015, because, as many agree, it had been arranged as an end run around President Obama. And last year he voted for a resolution opposing laws that penalize Israel boycotters, even though he opposed BDS, since he believed, as many do, that such laws limit free speech.

But those few disagreements pale in comparison with the enormity of Lewis’ legacy, and his unbending commitment to fairness, equality and essential goodness.

John Lewis was a dear friend of our community. We would be wise to heed his guidance: “When you see something that is not right, not just, not fair, you have a moral obligation to say something, to do something. Our children and their children will ask us, ‘What did you do? What did you say?’”

May the memory of John Lewis be for a blessing. PJC