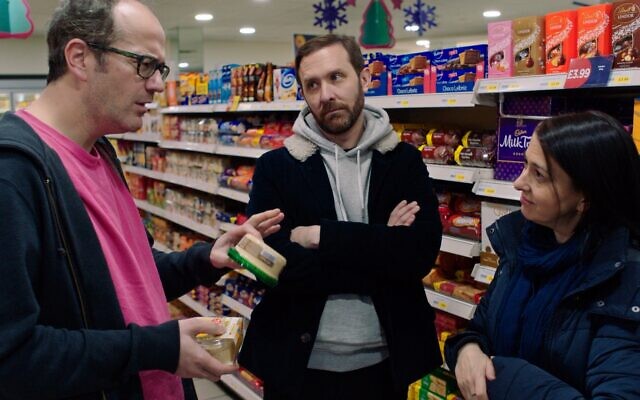 These critics must question whether they are laughing because a joke is funny or because it is simply too relatable.

“The Jewish Enquirer,” released on March 20 by Amazon Prime in the United States, provides both experiences in spades.

The British show follows the adventures of Paul Green (Tim Downie), a journalist at The Jewish Enquirer whose job consists mostly of doing taste tests of fruit from different supermarkets, reviewing electric cars and being harangued by an editor who demands the “Jangle” — Jewish angle — to every story.

His sister Naomi (Lucy Montgomery) is constantly asking him to babysit, and his friend Simon (Josh Howie) tags along to his interviews in the hopes of meeting women.

The show is most enjoyable when it playfully skewers Judaism and anti-Semitism. Whether it’s a dentist slash mohel (Dana Haqjoo) saying, “No, I do not collect pictures of baby boys’ penises,” when Paul and Simon ask for reference pictures or a Tory MP (Ajay Chhabra) asking Paul to pass on his thanks “to all Jews for their contributions to British society,” showrunner Gary Sinyor has his finger on the pulse of everything bizarre about Jewish life in Britain.

Each episode ends with a view of The Jewish Enquirer’s website and treats viewers to headlines like “Daniel Craig is Not Jewish — Exclusive,” “Adam Sandler Lookalike Looks Like Adam Sandler — Non-exclusive” and “Hamas in Running for Nobel Peace Prize.”

However, it seems the creators expect audiences to tolerate Paul because he is too ambitious to work for “the 4th largest Jewish publisher in the U.K.” As a character, he doesn’t have many redeeming or even interesting qualities besides being so neurotic he leaves multiple fake addresses for a key cutter who offers to drop off his new key.

The show’s treatment of women is also icky. Naomi is a flat character who exists solely to nag her brother and a young vapid YouTube vlogger (Annabel Baldwin) is successful only because she films in her underwear. Paul and Simon spend much of the first episode discussing the disadvantages of sex with women who have given birth.

When Paul and Simon visit the home of Simon’s sister Amanda (Katie Alexander-Thom) to help her prepare for her son’s bris, her husband Liam (Joe da Costa) argues with Paul about sexualizing women’s bodies while talking about his wife in the third person as if she’s not even in the room.

Maybe ask for her opinion, guys?

Liam, an Irish Catholic, is on edge for a reason. He only agreed to the circumcision because of a compromise he made with Amanda involving them getting married in a church.

“My son is gonna look like a Jew,” he groans.

“He is one!” Amanda reminds him.

The show’s chief weakness is its insistence on speeding past perfectly solid jokes to crash land in nastier territory for no valid reason. When Paul visits a nursing home to interview Louis (Freddie Davies), a Jewish senior who claims to be GLBTQ (that’s a term used largely by older Brits instead of LGBTQ), Louis says he is “questioning” whether he is a Japanese person in a Jewish man’s body because he prefers sushi to the food they serve at his Jewish nursing home.

The bit could have ended here and left audiences laughing at the ridiculousness of a man thinking he is LGBTQ because of his food preferences.

Unfortunately, in a moment of irritation Paul threatens to tell everyone in Louis’ nursing home that he is non-binary, “which is going to ruin your chance for a snog, never mind sex, for as long as you’re in here or on this planet.”

This lazy low blow about gender non-conforming people lacking sex appeal has already been run into the ground by characters like Julia Sweeney’s Pat on “Saturday Night Live.”

The season concludes with a conversation between Paul and his father Ronnie (Geoff McGivern), who tells him that everyone is secretly prejudiced but is pretending not to be. This is meant to be a form of anti-PC absolution for Paul after he spends the day being called out for offending people.

The scene is supposed to be heartwarming, but it’s hard to be satisfied by two rude men validating each other.

It was disappointing for the show to end on one of its worst aspects — an unappealing man whining about why he can’t do and say whatever he wants all the time — rather than one of its genuinely funny observational jokes about Jewish culture. pjc