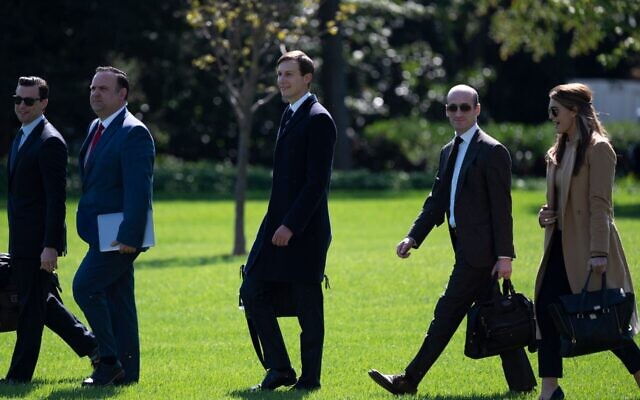 (JTA) — President Donald Trump announced early Friday morning that both he and First Lady Melania Trump had tested positive for COVID-19 and would begin quarantining.

Several prominent Jewish White House officials are among the many people close to the president who could have been exposed to the deadly virus this week.

Trump’s announcement — coming just weeks ahead of the presidential election — came hours after news broke that Trump advisor Hope Hicks had tested positive. She began to show symptoms Wednesday while traveling with Trump to a rally in Minnesota.

People with COVID-19 can transmit the disease before showing symptoms and may actually be most contagious during that time, according to researchers. That would put anyone who was in contact with Hicks or Trump earlier this week at risk.

Jared Kushner, Trump’s Jewish son-in-law and senior advisor, also traveled to the Minnesota rally; he and Hicks also flew that day on Marine One with Stephen Miller, another Jewish senior advisor. Photographs show none of them wearing a mask.

On Tuesday, Ivanka Trump, the president’s daughter and advisor, who is Jewish, was among the Trump family members in the audience at the presidential debate in Cleveland. According to media reports, she wore a mask when entering and existing the auditorium but not during the debate.

Trump’s announcement raises questions about whether Vice President Joe Biden, who is running against him and ahead in the polls, could have been put at risk during Tuesday’s debate. It also comes after Trump faced criticism for his behavior during the debate, which included not condemning white supremacists when invited to do so, and amid ongoing criticism about his handling of the coronavirus pandemic, which so far has killed more than 200,000 Americans. PJC