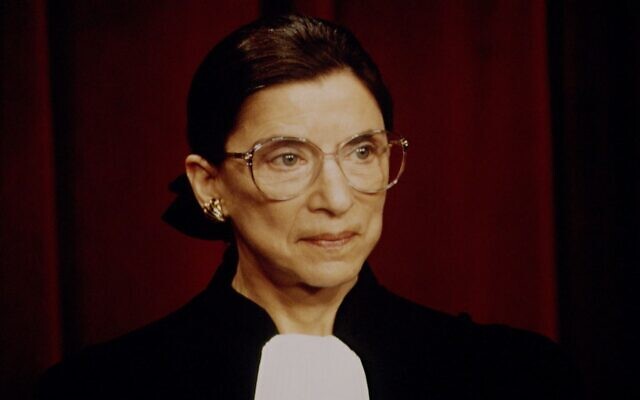 Supreme Court Justice Ruth Bader Ginsburg was a political and cultural giant on and off the bench. (Jeffrey Markowitz/Sygma via Getty Images via JTA)

(JTA) — There’s no way to tally all whom we lost in 2020, a year when we mourned even our ability to carry out time-tested rituals of grief.

Among those who died this year were some of the Jewish world’s most famous and influential pillars in a range of industries, realms of thought and areas of activism — from the pioneer jurist Ruth Bader Ginsburg to the moral thought leader Rabbi Jonathan Sacks to the Modern Orthodox rabbi Norman Lamm to the influential LGBTQ activist Larry Kramer.

But many of the people whose deaths tell the story of 2020 were not widely known, except among the people who loved them and the communities they enriched.

To honor the loss that defined this year, we’re departing from our usual end-of-year practice of highlighting only a few luminaries. Here, we’ve listed all of the people memorialized in Jewish Telegraphic Agency obituaries this year.

We’ll start with the many people — many of whose names will never make the news — lost to the pandemic that still rages. After that, we have decided the names into themed sections and listed them in chronological order of their death.

Nearly 2 million people worldwide have died of COVID-19, the new coronavirus that emerged in China at the end of 2019. Among them were countless Jews, including thousands of Israelis, large numbers of aging Holocaust survivors and rabbinic leaders around the world. The disease felled prominent people, such as the Novominsker rebbe, Yaakov Perlow, and Fountains of Wayne songwriter Adam Schlesinger, who was just 52 when he died April 1. But it also took from us mothers, fathers, grandparents, young adults with promising futures and dear friends — the full range of human experience extinguished by an unrelenting pandemic.

William Wolff: This later-in-life rabbi returned to Germany, where he had fled the Nazis as a child, to lead a community in a former East German state.

Adin Steinsaltz: His landmark translation of the Talmud made it more accessible. 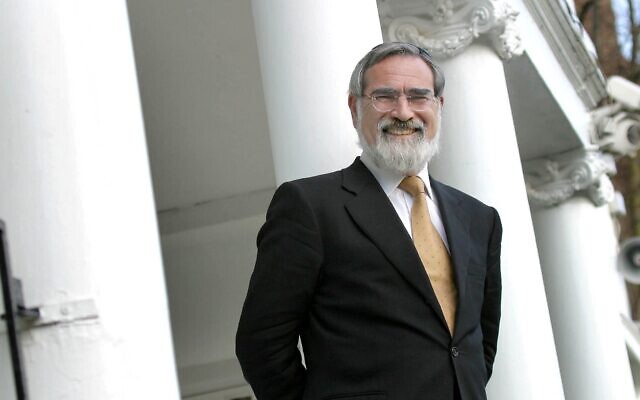 Jonathan Sacks seen as the chief rabbi of the United Kingdom, circa 2000. (John Downing/Getty Images via JTA)

Jonathan Sacks: The former chief rabbi of Britain was one of the Jewish world’s leading moral and intellectual voices.

Dovid Feinstein: Feinstein was one of the foremost haredi Orthodox legal authorities in the United States and a symbol of the rich Jewish history of the Lower East Side of Manhattan.

David Stern: The beloved and longtime commissioner of the NBA helped turn the league into a global powerhouse.

Buck Henry: Henry, born Henry Zuckerman, was another Mel Brooks acolyte but a star screenwriter in his own right, penning scripts for films such as “The Graduate.”

Kirk Douglas: The iconic movie star of Hollywood’s early golden age, who was born Issur Danielovitch and lived until 103, reconnected with his Jewish roots later in life. 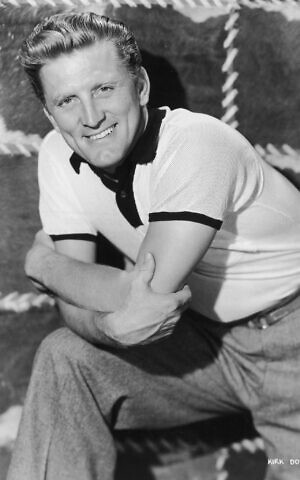 Sy Sperling: The Jewish son of a Bronx plumber was famous for his Hair Club for Men ads in the New York City subway, noting that he wasn’t only the company’s president, he was also a client.

James Lipton: He hosted the famed “Inside the Actors Studio,” interviewing hundreds of movie stars over decades.

Danny Goldman: The actor and casting director, who was raised Orthodox and attended Jewish day school, was best known as the voice of a Smurf.

Alan Shestack: The influential museum director helped lead the Museum of Fine Arts in Boston, the Yale University Art Gallery and the National Gallery of Art.

Jerry Stiller: One generation knows him best as the father of Ben, and another knows him as George Costanza’s cranky dad on “Seinfeld,” but Stiller was an actor with broad range — and a mensch.

Milton Glaser: One of the most famous and influential designers of all time made some pretty Jewish graphics in his heyday.

Carl Reiner: The comedy legend called himself a “Jewish atheist” after the Holocaust, but that didn’t stop him and his best friend Mel Brooks from writing some of the 20th century’s best Jewish comedy.

Angela Buxton: The 1956 Wimbledon doubles champion was denied admission to the All England Club, which hosts the prestigious tennis tournament and normally gives lifetime access to all winners, because of anti-Semitism.

Arnold Spielberg: His war experiences inspired his son Steven to make “Saving Private Ryan,” and he helped make the USC Shoah Foundation into a leading archive of Holocaust testimony.

Ronald Harwood: The acclaimed screenwriter won an Oscar for his script for “The Pianist,” based on the memoir of a Polish Holocaust survivor.

Helen Reddy: The Grammy Award winner for the hit feminist anthem “I Am Woman” converted to Judaism.

Marlee Shapiro Asher: The acclaimed visual artist, who lived until 107, survived the Spanish flu pandemic as an infant and COVID-19 in the last year of her life.

Catie Lazarus: The comedian and writer hosted one of the entertainment world’s best kept secrets: “Employee of the Month,” a live show that involved standup and interviews with celebrities.

Ruth Bader Ginsburg: The first Jewish woman to serve on the Supreme Court was a feminist pioneer, an unapologetic liberal warrior and in her later years a pop culture icon.

James Wolfensohn: The investor-turned-World Bank president was a philanthropist to Jewish causes and shepherded Israel’s exit from Gaza in 2005.

Theodore Mann: Mann led several major Jewish organizations, including the Conference of Presidents of Major American Jewish Organizations and the American Jewish Congress, and was an early critic of Israel’s occupation of the West Bank.

Larry Kramer: The outspoken writer emerged as one of the most important figures in the history of LGBTQ activism during the AIDS crisis. 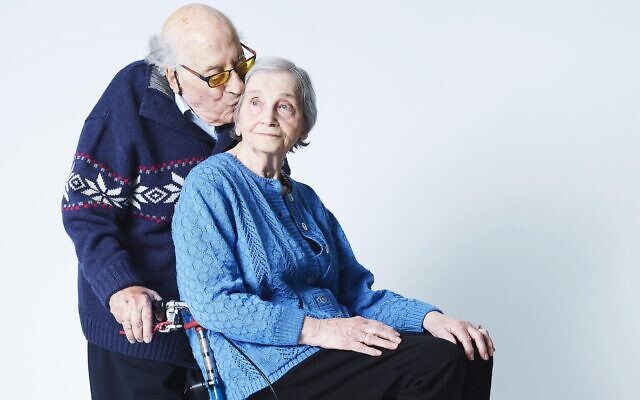 Larry Kramer poses for a portrait at the door of his New York apartment in April 1993. (Catherine McGann/Getty Images via JTA)

Gabor Hirsch: Hirsch, who survived near death in Auschwitz, was one of Switzerland’s most prominent advocates for Holocaust commemoration.

Justin Sonder: Sonder became a police officer in his native Germany just six months after U.S. troops liberated him from a death march from Auschwitz, and later a left-wing politician and activist.

Renzo Gattegna: In addition to testifying before young people about the Holocaust, Gattegna helped rebuild the Jewish community in Italy after the genocide and eventually led the Union of Italian Jewish Communities.

Paul Sobol: The Belgian Auschwitz survivor became dubbed a “a conveyer of memory” by local media in his later years.

Maurice Cling: Cling, who survived Auschwitz and Dachau, became an English teacher who also told his story to teens in France, where he eventually fled to.

Esther Cohen: Cohen, who escaped a stint in Auschwitz, educated her fellow Greeks about the Shoah.

Norman Lamm: The prolific Jewish scholar and author helped turn Yeshiva University back into a flagship institution of Modern Orthodoxy as its longtime president.

Zeev Sternhell: The Israeli expert on fascism and ultranationalism taught at Hebrew University for decades and was an outspoken critic of the settler movement.

Martha Nierenberg: The Hungarian Holocaust survivor and MIT biochemist who spoke six languages helped bring Scandinavian furniture design to the U.S. through a company with her husband.

David Schneer: The beloved Jewish studies professor at the University of Colorado died of the coronavirus at 48.

Robert Lappin: The massive giver to Jewish causes helped found the International Fellowship of Christians and Jews and sponsored teen trips to Israel decades before the start of the Birthright program.

Ilia Salita: His Genesis Philanthropy Group worked to strengthen the Jewish identity of Russian-speaking Jews around the globe.

Yefim Goldberg: The 106-year-old Jewish veteran of World War II who was honored frequently by the governments of Belarus and Russia.

Tedje van der Sluis: The Dutch Holocaust survivor was the subject, along with her survivor husband, of a hit documentary in her native Holland.

Jackie Jakubowski: He became one of Sweden’s most important Jewish voices as editor of the local cultural magazine the Jewish Chronicle.

Beny Zlochisty: The beloved Mexican Jewish leader helped Jews in the Soviet Union, led trips to Holocaust sites in Europe through March of the Living and helmed the Mexican Zionist Council.

David Galante: It took decades for the Auschwitz survivor to teach younger generations about his experience in his adopted Argentina.

Jorge Kirszenbaum: The influential former president of Argentina’s Jewish community helped the relatives of those who were kidnapped and disappeared under the last military dictatorship that ruled Argentina, from 1976 to 1983.

Mikhail Zhvanetsky: The Holocaust survivor from Odessa became one of Russia’s most famous standup comedians, against all odds during the oppressive Soviet Union years.

Suzanne Belling: The former JTA correspondent was a leading writer on Jewish issues in South Africa.

Joseph Safra: Brazil’s richest man at the time of his death, with a fortune of over $23 billion, was a leading global Jewish philanthropist. PJC