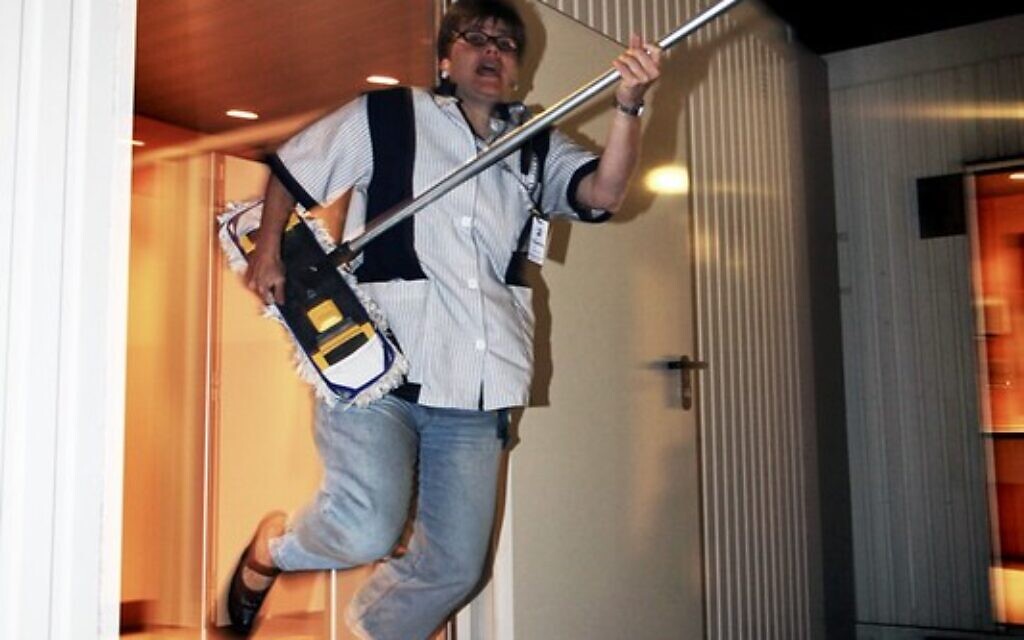 Karen Galatz rues not pitching a TV show about a balaboosta — a super housewife. Photo by Risto Kuulasmaa courtesy of flickr.com.

I could kick myself. I pride myself as a writer with a knack for timing and clever ideas. Yet I’ve just missed out on a golden opportunity to pitch a winning TV show. It’s too late. The train has left the station. The boat has sailed. Pick your cliché. Whatever. I blew it. Yes, I’m a writer. And a balaboosta to boot. I could have been a contender. Now I’m just a TV viewer.
What, for heaven’s sake, am I ranting and raving about?

I’ll tell you: Fox just debuted a series called “The Cleaning Lady.” Set in Las Vegas, the show includes Cambodians, casinos and criminals — and a kid with a life-threatening immunodeficiency disorder. It’s all a jumble. It’s all wildly implausible. But that’s not the point. It’s the title that gets my goat.

I coulda, shoulda, pitched a show about a cleaning lady — a balaboosta — a Las Vegas balaboosta, whose secret power is cleaning. But unlike Fox’s “The Cleaning Lady,” my show would have been believable, because 1) I’m from Las Vegas; 2) I’m Jewish; and 3) Like many Jewish ladies, I am a balaboosta — a super housewife, a mother and (you guessed it) a nonstop cleaning machine.

Now, in terms of my credentials, I’m not bragging. It’s genetic.

My grandmother and mother were balaboostas par excellence. And it’s not just in the genes, but also the Q-tips and the toothpicks they handed me … to clean corners and crevices in furniture and the kitchen and bathrooms as part of my (early) childhood chores.

As for my balaboosta TV show, here are possible plotlines: A young newlywed calls in distress. She’s got a big party to prepare for, but her oven’s a mess. Put me on the job! No cleaning task is too grimy. Encrusted brisket gravy? No problem.

The in-laws are coming, but the bathroom tile is black with mold? Who are you gonna call? “The Balaboosta.” But, of course!
Coffee with milk and sugar stains on your hubby’s favorite shirt? And he’s got a Zoom job interview for a cushy new position?! Disaster (and divorce) loom? Don’t despair? Call “The Balaboosta.” Stain be gone! Marriage be saved!

Think of me (and my show) as a 21st-century version of Gertrude Berg — who portrayed Jewish wife and mama extraordinaire Mrs. Goldberg on radio, TV, film and stage from 1929 through the mid-1950s — updated with a smartphone, facial fillers and a touch of snark.

And think of the Vegas mobster, excuse me, alleged mobsters plotlines. Think of their special hard-to-clean-up bloody requests? No problem. No job too tough for “The Balaboosta.” Skill plus discretion is her calling card. (She’s no yenta, at least when she’s on the job!)

After all, what balaboosta hasn’t had her share of bloody-nose stained T-shirts to clean? Granted, gunshot stains on the carpet are obviously a bit more labor-intensive, but what balaboosta cannot rise to the occasional challenge? And really, what’s the difference between patching a moth-eaten sweater hole and a bullet hole in a jacket? A hole is a hole is a hole. Am I right?

I’m confident the balaboosta-based cleaning program is a show with legs. I mean, if Mark Harmon’s character Jethro Gibbs of “NCIS” could build a boat in his basement for 19 seasons, attracting viewers with avid devotion, surely those same viewers would be held in thrall by a woman scrubbing kitchen floors, and dispensing folksy household wisdom to perps and people from all walks of life?

And while I don’t know what direction the Fox show will take — with no disrespect to the Cambodian cleaning lady plotline — I know “The Balaboosta” can deliver ratings week after week, armed only with a Brillo pad and a bissel kugel.

So, what do you about it, Mr. Bigshot Hollywood Producer? Whaddya say? In these germaphobe pandemic times, can’t audiences handle two cleaning lady programs? How about we do lunch? Or should I have my people call your people? I am, as they say, available. PJC

Karen Galatz is the author of “Muddling through Middle Age,” which provides women (and men) of a certain age a light-hearted look at the perils and pleasures of growing older. An award-winning journalist, her national news credits include The MacNeil/Lehrer NewsHour and the Nightly Business Report. She n now lives in Reno, Nevada. This piece first appeared on The New York Jewish Week.