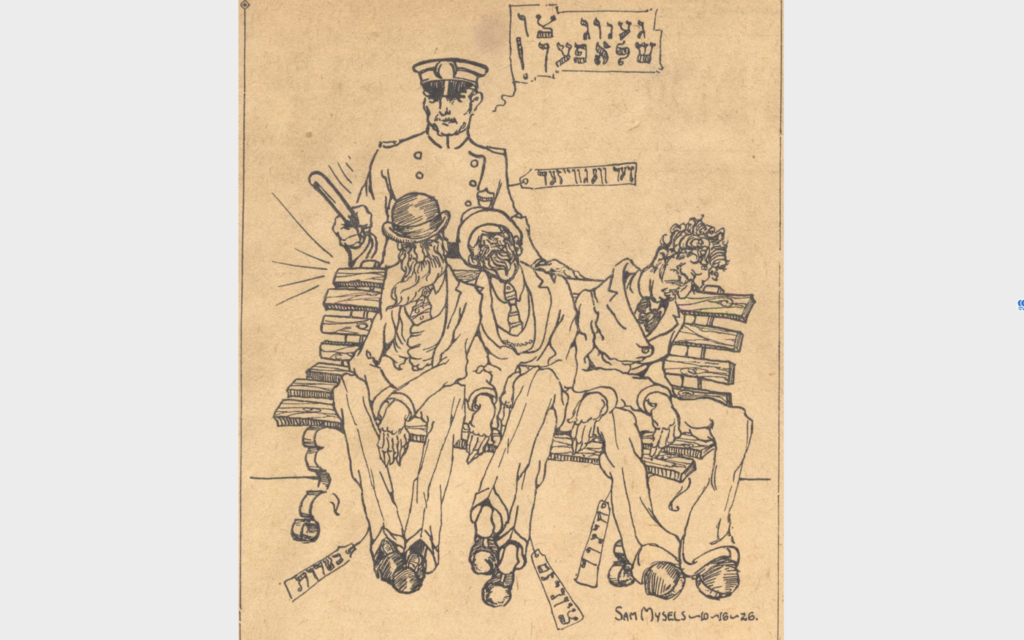 Going through the 1926 volume of the old Jewish Indicator, I found an editorial cartoon with Pittsburgh references, indicating it had been drawn locally. That’s unusual. Most illustrations in that Yiddish newspaper were syndicated and dealt with national subjects.

The illustrator was Sam Mysels. Paging ahead, I found four more. This is my favorite. I love the languidness of the three snoozing men, and the knotty wood grain on the bench.

The cartoon is a harmless act of journalistic puffery. The police officer is labeled “The Indicator.” He’s telling the three men “Enough Sleeping!” The three men are labeled “Chinuch (Education),” “Zionism,” and “Kashrut.” The Jewish community is in a stupor, the cartoon is saying, but the noble Indicator shall revive the spirit of Jewish devotion.

I thought I was having one of those long-dreamed-for moments: the discovery of a hidden talent, heretofore unknown to the world. That lasted as long as a Google search. It turns out Sammy Mysels was pretty well known in his day. In fact, so was his whole family.

His parents were vaudevillians. Upon settling in Pittsburgh, his mother, Sarah Mysels, became a poet. Her best-known work was “Di Mizreh Zayt,” a collection of nearly 200 poems, in Yiddish, mostly about Jewish life. In one called “In Your Daddy’s Shoes,” she tisk-tisks one of her kids for listening to too many records and getting into trouble.

The father with the eponymous shoes was Harry Mysels. He sold coin-operated music boxes on Centre Avenue and had a side career performing dramatic readings of Yiddish literature at local Jewish charity dinners. He was a charter member of the Cantor’s Association of Western Pennsylvania. The organization was a last-ditch effort in the 1930s and 1940s to encourage local families to hire cantors to sing at their simchas.

The second of eight kids, Sammy Mysels left the Hill District in the 1930s to become a songwriter on Tin Pan Alley. He was a workhorse, publishing more than 350 songs in his lifetime. He wrote lovely ballads like “The Singing Hills” and “We Three (My Echo, My Shadow, and Me).” He wrote the hopping “Bim Bam Baby” for Frank Sinatra. He wrote several campaign songs, including the theme for the 1960 Democratic Convention, “Walkin’ Down to Washington.” He also wrote a ton of goofy novelty hits like “Mention My Name in Sheboygan” and “She Made Toothpicks of the Timber of My Heart.”

His little brother George went to New York a decade later and also became successful in the music business. Like Sammy, he was multitalented. He drew comics for Pittsburgh newspapers as a tween. He later invented a mix-and-match toy called the Comic Rotor.

As a songwriter, George was much less boisterous than Sammy. His biggest hit was the inspirational “One Little Candle.” He rewrote Stephen Foster hymns to make them more religious, and he composed a melody for the Gettysburg Address. He later moved to California and wrote “The Voice of the Pigeon,” an appreciation of the ubiquitous bird.

Their youngest brother Maurice (who listened to too many records) managed his older brothers’ songwriting careers. He later tried his hand at it. His song “I Want You, I Need You, I Love You” was a hit for Elvis in 1956. Maurice never left for New York. He stayed in Pittsburgh and became a Justice of the Peace in Forest Hills. He held an annual New Year’s Eve party for all the sauced revelers who were pulled over for driving drunk.

The Mysels Brothers were unsentimental about their art, especially Sammy. He once wrote a song in two minutes and left it un-copyrighted. Whoever wanted it could have it, he said. He advised budding songwriters to get day jobs, even if they hit it big. “Any songwriter that’s too proud to sweep floors shouldn’t even be a floor sweeper,” he said.

A local columnist once accused Sammy of being crude. Maurice wrote to the editor, explaining that songwriters are often intelligent and idealistic. “However like newspaper columnists, they have to eat, pay rent, support their wives and children. And they realize it’s just good business to cater to the likes and dislikes of the majority of the people.” PJC

Eric Lidji is the director of the Rauh Jewish History Program & Archives at the Heinz History Center. He can be reached at eslidji@heinzhistorycenter.org or 412-454-6406.