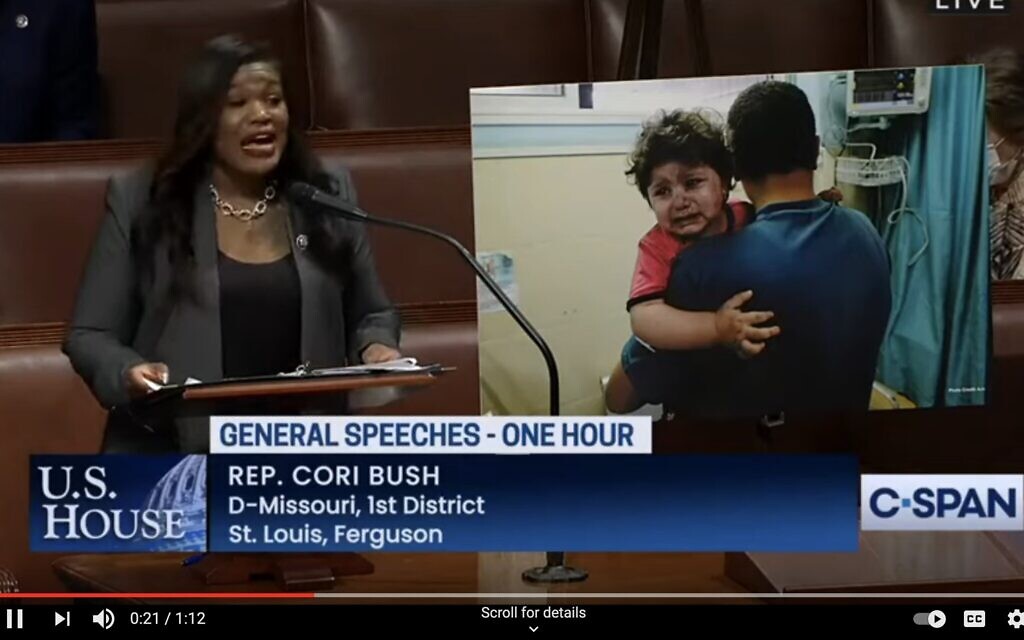 The pattern of events in the recent hostilities between Israel and the terrorist organizations, Hamas and Islamic Jihad, was unfortunately predictable in many ways. We have witnessed the same routine in several previous battles, since Hamas violently took over the Gaza Strip in 2007. Hamas shoots rockets at Israeli civilians. Israel responds by bombing Hamas infrastructure located in the midst of Gaza civilians. Israel is accused of using disproportionate force and of war crimes. A ceasefire is eventually agreed upon.

What was different this time was the immediate attack against Israel by extreme-left members of the United States Congress. The vehement assaults by “progressive” members of the Democratic party were shameless in their irresponsible slander against Israel that was dictated solely by the ideological requirements of their woke agenda.

On May 13, three days after Hamas initiated the latest round of hostilities, the Progressive caucus dedicated time to allow members of “The Squad”— six Democratic members of Congress — and their leftist comrades to proclaim their outrage at Israel’s self-defense against the onslaught of thousands of rockets shot at Israeli civilians. Their well-known jargon — apartheid, ethnic cleansing, brutalization, violent oppression, occupation, etc. — flowed freely in their frenzied condemnation of Israel.

A particularly obnoxious, yet very telling, speech, was delivered by Cori Bush, the representative from St. Louis. This newly inducted member into The Squad sounded more like a propagandist for Islamic jihad than a member of Congress. Apparently unencumbered by any knowledge of the subject, Bush felt free to accuse Israel of ethnic cleansing and apartheid, among other human rights violations. Clearly, one need not agree with all Israeli actions, but accusations of ethnic cleansing and apartheid are sure indicators of extreme ignorance or extreme malevolence. She did not speak one word in opposition to Hamas’ violation of international law and human rights by shooting thousands of rockets at Israeli civilians from within its own civilian population

The very use of the term “progressive” is misleading. The designation “progressive” has been used to mean anything from liberal Democrat to hard left neo-Marxist. These Congressional “progressives” would be better described as Washington “wokesters” — adherents of the woke culture, with an unshakeable faith that they epitomize the heights of moral clarity. In fact, they embody the depths of neo-Marxist depravity. Woke politics employs gang-like methods: cancel culture, shaming, intimidation, threatening job loss and more, to force their moral certitude on others.

All that is progressive about the woke left is its progressive descent into the netherworld of poisonous propaganda, moral distortion and vile antisemitism.

These Washington wokesters, can be classified into two undesirable groups:
(1) the wacky and wonky wokesters whose unabashed ignorance of the Israeli-Arab conflict allows them to speak freely on the subject without fear of embarrassment by unaccommodating facts; and
(2) the willful and wanton wokesters who will distort or ignore any fact in their malicious drive to defame, demonize, and delegitimize Israel.
With their loud and obnoxious speech and action, the Washington wokesters are quickly effecting the transformation of the Democratic party from a party of liberal Democrats to a party of neo-Marxists.

Wokesters use cheap and meaningless slogans to promote a selective application of lofty concepts such as “social justice” and “human rights.” Their accepted parameters of social justice often include ignoring calls by Palestinian leadership to murder Jews and its denial of Jewish history. The Palestinian Authority’s encouragement and reward for suicide bombings, knifings and car rammings also are not condemned as part of their woke sense of justice. Hamas’ charter calling for the destruction of Israel, its launching of incendiary balloons, shooting rockets and building tunnels to target Israeli civilians, seem to pose no problem for the wokesters’ understanding of human rights. By not forcefully denouncing these terrorist and criminal acts, they give legitimacy to them. They seem to excuse the Palestinian Arabs for these acts because they are “oppressed victims.”

One of the original members of The Squad is Alexandria Ocasio-Cortez. During the Israel-Hamas hostilities, she was a lead sponsor, along with eight other leftist Democrats, of a Democratic resolution to block a $735 million sale of precision-guided weapons to Israel during the hostilities. Israel’s ability to strike Hamas and Islamic Jihad targets with, usually, incredible precision would be an inducement for the terrorists organization to agree to a ceasefire sooner rather than later. Without such weaponry the choice is: (1) to not respond at all to Hamas attacks; (2) to bomb Hamas targets with much less precision causing innumerably more casualties; or (3) to attack Hamas on the ground by entering Gaza causing still more casualties. Thankfully the resolution did not pass, but this is only a taste of what is to be expected from the Washington wokesters.

The insidious infiltration of the woke culture into the Democratic party in Congress brings to mind the resistible rise of Jeremy Corbyn as head of the British Labour party in 2015. During his term as Labour leader from 2015 to 2020, Corbyn moved the party to the extreme left. He once referred to Hamas and the Lebanese terrorist organization Hezbollah as his “friends,” although he later expressed regret for doing so. In 2014, he was present at a wreath-laying at the graves of Palestinian Arab terrorists who murdered Israeli athletes in Munich in 1972. The rise of antisemitism in the Labor party grew immensely during Corbyn’s reign. Corbyn himself was accused by many, including the late Chief Rabbi of England, Rabbi Jonathan Sacks, of being an antisemite and of tolerating antisemitism in the ranks of the Labour party. Many members of the Labour party who complained about antisemitism were harassed and abused by Corbyn supporters and left the party. Corbyn and the Labour party suffered a humiliating defeat in the 2019 general election and Corbyn resigned in disgrace.

The far left’s hatred of Israel is interwoven with left-wing antisemitism. This awaits the Democratic party if it remains an obsequious kowtower to the arrogance and dangerous madness of the Washington wokesters.

It is not unreasonable to postulate that the dramatic rise of anti-Semitic attacks in the United States, during and following the Israel-Hamas hostilities, is occurring, not only due to the vile attacks against Israel in social media and the unprofessional and irresponsible reporting by large segments of the mainstream media. It, no doubt, has also increased due to the extremist political attacks by the Washington wokesters.

Let’s hope and pray, if there are any adults left in the Democratic party who still adhere to the values of liberal democracy, that they develop some moral courage and fight back. PJC