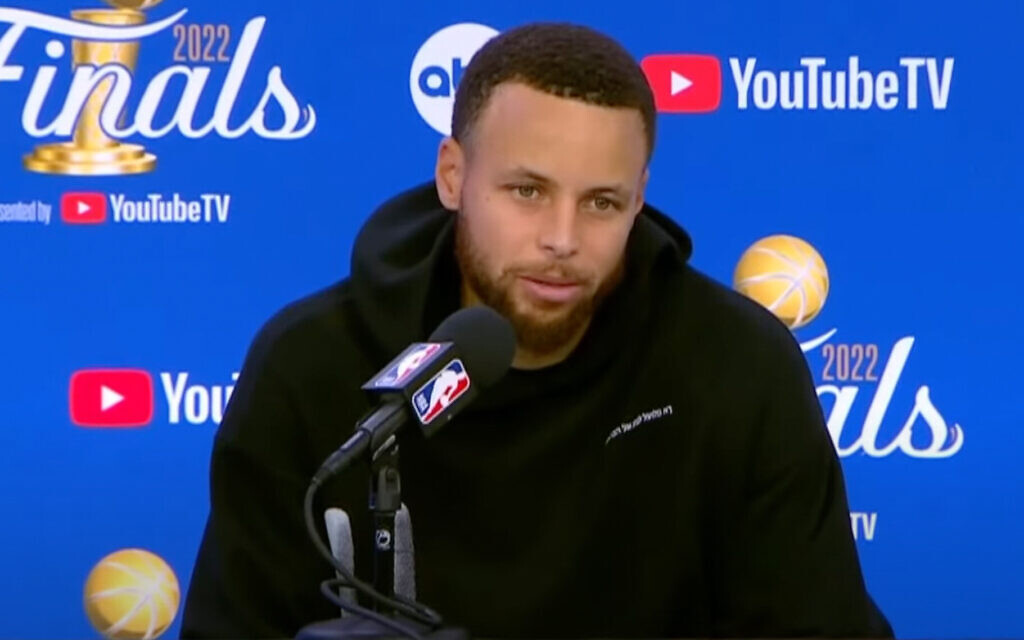 Stephen Curry sporting a sweatshirt with Hebrew on it during an NBA Finals postgame press conference, June 10, 2022. (Screenshot from YouTube)

(JTA) — Jews looking for a rooting interest in the concluding games of this year’s NBA Finals might have one now, thanks to a head-turning wardrobe choice from Golden State Warriors star Stephen Curry.

No, Curry isn’t Jewish. But during Friday’s Game 4 postgame press conference, following a Warriors victory, he did don a Hebrew sweatshirt for the cameras — one that matches his own Hebrew tattoos.

Eagle-eyed Twitter sleuth Emma Goss, a reporter at Jewish Telegraphic Agency partner J. The Jewish News of Northern California, caught the hoodie. It features the phrase “האהבה לא תבל לעולם אך”, which translates to “love never fails” — a reference to the New Testament passage 1 Corinthians 13:8 (though with the Hebrew letters written in the reverse order). It’s also one of Curry’s two Hebrew tattoos, which he shares with his wife.

The featured art is deep-rooted in meaning and highlights the two tattoos that defenders see when @StephenCurry30 shoots on the court: “Love Never Fails” and “Trust — Commitment — Care.”

Curry’s fascination with the language might stem from his mother, Sonya Curry, who told reporters in 2015 that following a previous visit to Israel, she “was just transformed spiritually.” Sonya Curry, who also has a Hebrew tattoo, said she wanted to learn Hebrew because it is the language that Jesus spoke (more likely, he spoke Aramaic, although probably understood Hebrew), and added that she wanted to read the Torah in Hebrew.

Of course, a haphazardly translated New Testament phrase is hardly a gateway to meaningful Jewish wisdom. But the NBA Finals series between the Warriors and the Boston Celtics has other Jewish connections, too.

For Boston, that includes Hall of Fame coach and executive Red Auerbach (who died in 2006), the son of a Russian-Jewish immigrant who is generally considered the greatest coach in the history of basketball.

For the Warriors, there’s Jewish-Ukrainian immigrant and fellow Hall of Fame coach Eddie Gottlieb (who died in 1979), who played a leading role in bringing the team to the Bay Area from Philadelphia.

Two of the NBA’s biggest awards are named after these two Jewish basketball pioneers. The league’s Rookie of the Year award confers the Eddie Gottlieb Trophy, while the Coach of the Year receives the Red Auerbach Trophy.

Curry’s Warriors lead the Celtics three games to two heading into Thursday night’s Game 6. If the Warriors win, it will be the team’s fourth championship since 2015. PJC