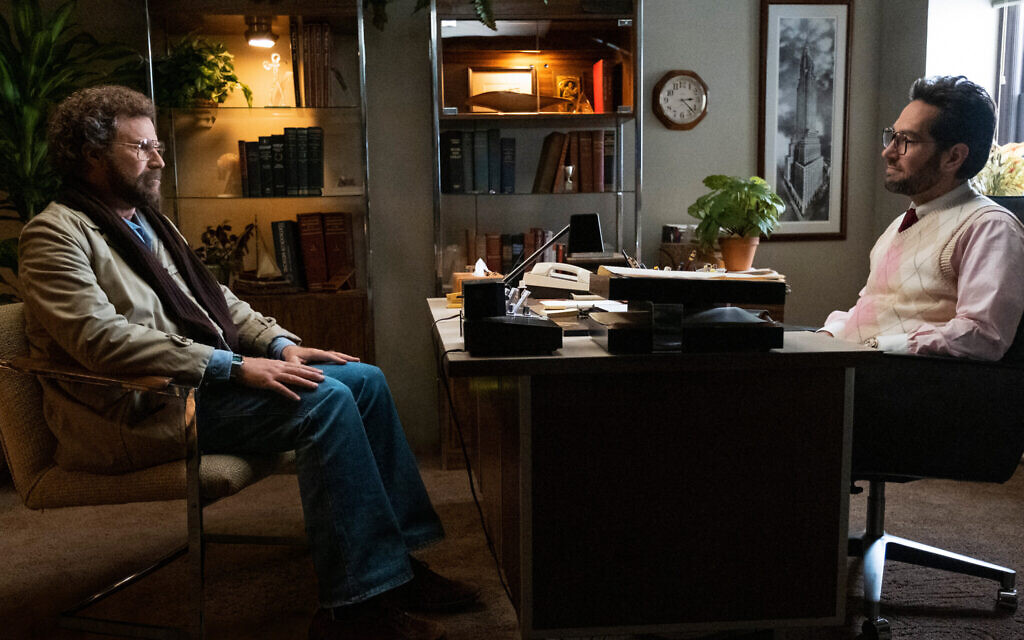 The Hippocratic Oath is a Greek text that every physician and medical professional takes when beginning their career. It’s a promise to “do no harm” and prioritize the patient above all else, lest the doctor loses their license and the patient their well-being.

Apple TV+’s limited series “The Shrink Next Door,” which premiered on Nov. 12, pushes the meaning of the Hippocratic Oath through the troubled and troubling relationship between the behavior of a charismatic and calculating therapist.

Adapted from the Wondery and Bloomberg podcast of the same name by Joe Nocera and based on a true story, the series shows the 30-year relationship between psychiatrist Isaac “Ike” Herschkopf (Paul Rudd) and patient Marty Markowitz (Will Ferrell), which skirts the line between comradery and manipulation.

Rudd — whose Jewish grandparents changed their name from Rudnitsky — portrays Dr. Ike as an easy-going, gregarious man: He’s a smiling therapist and active member of his modern Orthodox synagogue. As a Jewish man himself, Rudd captures the familiar New York diction toned down by his character’s affluent lifestyle.

He’s a bit schlubby and pathetic, and Ferrell’s New York accent tends to come and go, perhaps exposing himself as a Californian gentile.

The duo’s differences are pointedly shown when Ike takes Marty to a Korean restaurant — which he describes as a deli — to continue their session over lunch. (Ike makes it clear to Marty that he’ll still have to pay for the session’s extra hour.) Ike sits down and begins contentedly slurping noodles with chopsticks. Marty shyly orders a turkey sandwich with nothing else on it.

During the series, Ike takes advantage of Marty’s delicate state and tendency to be taken advantage of, first by building him up, then by knocking him down.

The series doesn’t waste any time testing Marty and his relationship with his therapist, who is a walking HIPAA violation, disclosing his patience’s identity around his affluent New York neighborhood. Local park-goers, chess players and rabbis alike know Marty as Ike’s patient, which is perhaps a product of antiquated therapeutic practices from the ’80s, or an intentional exaggeration of Ike’s “unconventional” (read: unethical) practices.

With two well-known comedic actors in these two opposing roles, the audience would expect laughs to ensue and, for though the show is billed as a drama, it doesn’t shy away from putting Rudd and Ferrell into preposterous situations.

But it’s difficult at times for the audience to tell whether the show is an earnest commentary on the ability of doctor-patient relationships to become abusive or if it’s a dramatization of two people’s true stories. Either way, the writing strays into farcical territory.

“Shrink Next Door” raises the stakes quickly — Ike’s manipulation of Marty is laid on thick rather than insidious and slow to burn.

In the show’s second episode, Ike suggests Marty has a second bar mitzvah, though, as sister Phyllis explains, Marty has already had a bar mitzvah as a 13-year-old, complete with the participation of his loving family and prerequisite gastrointestinal emergencies.

The episode — spoilers ahead — spotlights Marty practicing the prayers for an aliyah, which Ferrell manages to pull off with more success than his New York accent, and toward the end of the episode, he ascends to the bimah to read his Torah portion before freezing up, only to be assisted by Ike, who has been dutifully standing beside him the entire time.

The two finish leyning Marty’s Torah portion together before the synagogue erupts with applause.

To a Jewish audience, the discomfort of this moment is palpable. It’s clear that even in the sophomore episode of the show, Ike has a stronghold over Marty. But more disturbingly, Ike has shamelessly grabbed the spotlight in a show of one-upmanship during the most sacred part of a Shabbat service — something clear to a Jewish audience, but maybe not as obvious to a gentile one.

For a show that relies heavily on non-Jewish cast members to portray Jewish characters, “The Shrink Next Door” has no problem delving into Jewish culture and religion. But with Rudd and Ferrell not pulling any punches with acting out their clear power differential, is it necessary to show the intimacy of Jewish practices for the sake of dramatic effect?

The show is generous with letting the audience know that Ike will cross boundaries. At times, it makes it just as clear that it will cross a boundary with the audience as well.

Episode five of the show is available to stream on Nov. 25. PJC