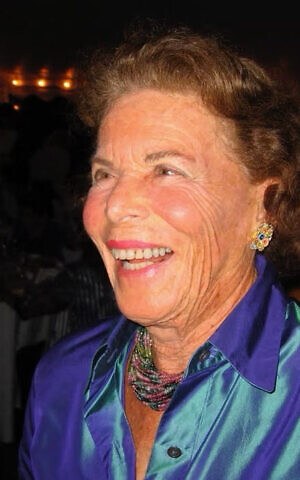 FRANK: Ruth Ohringer Frank. Pioneer. Globetrotter. Designer. Athlete. Trendsetter. Epicure. Philanthropist. Songster. Provocateur. Innovator. Matriarch. These are but a few of the many roles performed by the indefatigable Ruth Miriam Ohringer Frank, who died peacefully of natural causes at her home in Longboat Key, Florida, on June 13, five months shy of her 100th birthday. Born in Pittsburgh to the late Abe and Helen (Stern) Ohringer, Ruth was married for 61 years to the love of her life, James A. Frank, who predeceased her in 2004. She often reminisced of their first encounter at Cornell University, where the rebellious young “co-ed” caught the attention of the dismayed fraternity president by yodeling offensive lyrics to the college anthem. Two years later, they were married. This fiery spirit persisted throughout Ruth’s long, full and rich life. She was a true Renaissance woman, equally adept in her home studio as she was in the swimming pool, the kitchen, or the garden. Fueled by competition, she won first prize in diving as a young girl and first prize in flower arranging as a young adult. At 33, she partnered with the noted architect, Harry Lefkowitz, to design her family’s primary residence on Darlington Road. Combining 1950s modernism with Japanese and Asian motifs, the one-of-a-kind home was featured in the Pittsburgh Post-Gazette upon completion in 1954. Ruth’s global wanderlust took root in the early 1950s with travels abroad and fortified with a visit to Afghanistan and Iran in the early 1970s. For more than 20 years, Ruth and Jimmy, her devoted husband, made an annual pilgrimage to near and far Asia — she with a discerning eye for beautiful art and architectural objects and he with keen business acumen. In addition to exhibiting regularly at Saks Fifth Avenue stores around the country, in the late 1970s, Ruth was celebrated by Vogue as the first American jewelry designer to mix “ethnic” objects from faraway countries into unique individual necklaces, a trend that continues today. Her global design influences ranged from intricately hand-carved silver beads to elaborate Hindu temples. Ruth was also an unapologetic “jock.” A competitive golfer and tennis player, she took no prisoners on the links or on the court, priding herself on staying active and deriving fuel from a steady and “healthy” diet, later in life consuming vast quantities of dark chocolate, nuts, and her evening glass of red wine, always on the rocks. Until 2020, Ruth swam for hours daily and worked out with a personal trainer three times a week, landing her as a featured “remarkable resident in her nineties” in a 2016 Longboat Observer cover story. Like her husband, Ruth was philanthropic to the core. She spent countless hours each week studying the ratings of nonprofit organizations and writing checks to the many that met her strict criteria. She learned the value of hard work as a child from her parents, who owned and operated Ohringer Home Furniture, a successful enterprise in Braddock, Pennsylvania, and she never took for granted the many privileges and blessings bestowed upon her. With an infectious giggle and a dogged will, Ruth was most vigorous in the company of her vast and adoring circle of family and friends. Her entertaining skills were legendary, ranging from annual Super Bowl and New Year’s parties to elaborate family Thanksgiving celebrations, always replete with her signature cuisine and decor. She was, without question, the life of the party, belting out her favorite songs until the lights went out. Ruth O. Frank is survived by two daughters, Susan Lippard (Thomas), of Point Breeze, and Linda Ruth, of Ithaca, New York, (David Ruth, ex); two sons, James W. Frank (Catherine de Wet), of Umbria, Italy, and William O. Frank (Tess Williamson), of Seattle; five grandchildren; and seven great-grandchildren. The family would also like to extend special appreciation to Maria “Bell” Belchior and the team of extraordinary caregivers who so faithfully accompanied Ruth in her final chapter. Graveside services and interment were private. Memorial contributions may be made to the Jewish Federation of Greater Pittsburgh; Community MusicWorks in Providence, Rhode Island; or the donor’s choice. Arrangements entrusted to Ralph Schugar Chapel, Inc., family owned and operated. schugar.com PJC