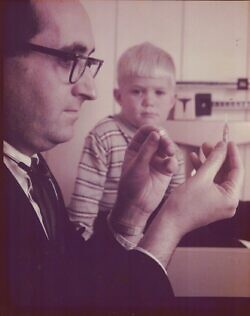 DREYER: Ronald Dreyer, M.D., passed away on Nov. 28, 2020. A longstanding member of the New York and the Pittsburgh Jewish communities, he will be remembered as a dedicated physician, loving grandfather, outstanding father and a devoted husband. He graduated from Brooklyn Technical High School and Washington University in St. Louis. His interests tended toward medicine and helping people. He trained overseas at the University of Leiden, where he not only learned medicine but also did so in a foreign language. During his time in Leiden, he married Mollie Marder. Their marriage lasted 62 years, until she passed away in 2017. His love for her was especially evident during the last five years of her life, when he became her sole caregiver. He refused to delegate that responsibility to anyone. On their return to the United States from the Netherlands, they lived in Baltimore, the Bronx and Rockland County, New York, and finally settled in Scarsdale, New York. His medical practice was based in Nanuet and Bardonia, New York. Dr. Dreyer also served as president of the Nyack Hospital medical staff. He had a large impact on many patients, both in the New Square and the rest of the Monsey community. He was one of the earlier practitioners to insist on universal vaccination for his patients. Dr. Dreyer was available to any patient, regardless of ability to pay in the Rockland community. There were many families where he took care of two and even three generations of children. He was one of the eyewitnesses at the 1981 Brinks Robbery, and his car was taken from him at gunpoint by one of the robbers. Despite the chaos and trauma of this event, he put these fears aside and attempted CPR for one of the fallen troopers. He was known to always put others first. Family was incredibly important to him, and he was always eager to let them know how proud he was of them. He will be greatly missed by his son Evan, his daughter-in-law Melissa and his grandchildren Rebecca, Samantha and Justin. In his memory, donations can be made to your local food bank. PJC