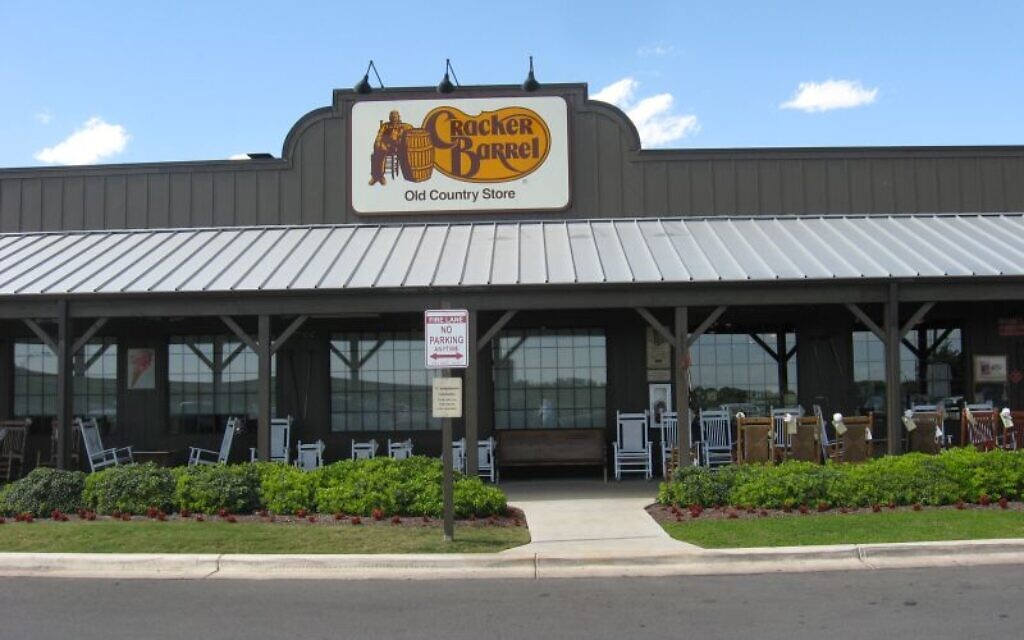 The author had a "tucky" encounter at a Cracker Barrel restaurant while traveling. (Dave Stone, creativecommons.org/licenses/by/2.0>, via Wikimedia Commons)

Shame on me: I don’t even know Mrs. Franklin’s first name. Then again, it was 1963, I was 15 years old and few, if any, in the Allderdice class of ’66, ever knew the first names of any of our teachers. Many of them were just eight or nine years older than we were, but to us, they seemed old enough to be our grandparents.

Mrs. Franklin was our English teacher, and she was anything but ordinary. She was one of the very few whose voice got inside me, and I take it with me everywhere I go. The thing about Mrs. Franklin was that she seemed to take it personally if you misused the English language.

Nowadays, the Mrs. Franklin within me rises up almost daily as the language gets butchered on a regular basis, mainly because of this crazy “so” thing. What is the deal with people starting sentences with “so”? Mrs. Franklin taught us that there were seven words known as coordinating conjunctions, and that they were never to be used to start a sentence. They are: and, but, for, nor, or, yet, and that nutty “so” word.

It’s been some time now, probably the better part of two decades, that “so” has broken out of Mrs. Franklin’s coordinating conjunctions and been elevated to sentence-starting status. I simply cannot fathom it, and it never fails to startle me whenever someone starts a sentence with “so.” In fact, there are many distinguished folks who start nearly every sentence with it. I was recently watching Treasury Secretary Janet Yellin give a speech on the economy and lost the entire content of her message because I was distracted by her use of “so” to begin each and every one of her thoughts. It seems the higher up the food chain you go the more frequent you get pummeled with it. Academia cannot resist it, and the medical profession is especially afflicted. With each passing year I visit more and more doctors on a regular basis, and more often than not find myself admonishing them, as they are incapable of beginning any sentence unless they start it with “so.”

Now, if this all ended with “so” I could give in and move on, but “so” has now morphed into such craziness as “sure” and even “absolutely.” I recently visited a local eatery and asked the waitress if she preferred the garlic scrod or the eggplant parm, to which she began her reply with “absolutely,” followed by an endorsement of the eggplant which was riddled with all manners of “so.”

In 1963 we didn’t abuse the English language with “so,” “sure,” or “absolutely.” I vividly recall our Passover, Rosh Hashanah, and Thanksgiving dinners, and the topics which dominated the adult table. Khrushev was big, along with pushbutton transmissions, and Richard Kimble, not to mention Lt. Gerard, or the one-armed man — and when they didn’t want the kids at the off-to-the-side card table to know what they were saying, they used their favorite tactic: Yiddish.

There was mitn derinnen (in the middle of everything) and nisht geferlech (not so terrible). Oy veh was everywhere, and then there was my all-time favorite: tucky.

Now, tucky was a whole new ballgame. No one ever seemed to know what tucky meant. I asked my mother, father, and all four grandparents and they seemed to agree that tucky had no meaning. They told me it was a unique word that you “just kind of shoved in there” for emphasis. I mean this was nuts. If meaningless tucky wasn’t enough to confuse all of us at the kids’ card table, what really aroused our curiosity was why the capital of Arizona seemed to prompt more Yiddish than anything else, but I’ll leave that for another day.

Let’s get back to this tucky thing. It appears that “so” is at this point baked into the culture, and since I simply cannot internalize it, I have decided to resurrect tucky, and yes, just shove it in there whenever I wish. Whenever someone starts a sentence with “so,” I make it my business to tucky them back. It’s as versatile a word as you will ever find, as you can use it as a noun, a verb, an adjective, or even an adverb. Tucky is my perfect antidote to “so,” although I must admit I still wonder where Mrs. Franklin is when we need her the most.

A word of caution: You can’t just tucky anywhere, as that could be hazardous. My wife and I were on a recent road trip to the beaches of South Carolina, when about seven hours into our journey we became quite hungry. Upon departing the highway at one of the exits we discovered there were not many restaurants, but did manage to come across a Cracker Barrel where we decided to have dinner. About halfway through our meal, a Cracker Barrel patron sitting at the next table noticed my Pirates hat and asked, “So what do you think of the Buccos losing over 100 games this year?” Mitn derinnen, I had a senior moment, forgot my whereabouts, and replied, “Tucky awful.” To which he retorted, “Tucky me? Tucky you.” PJC

Josh L. Sivitz lives in Pittsburgh’s South Hills. He is a past president and 10-time banquet emcee of the Western Pennsylvania Jewish Sports Hall of Fame.