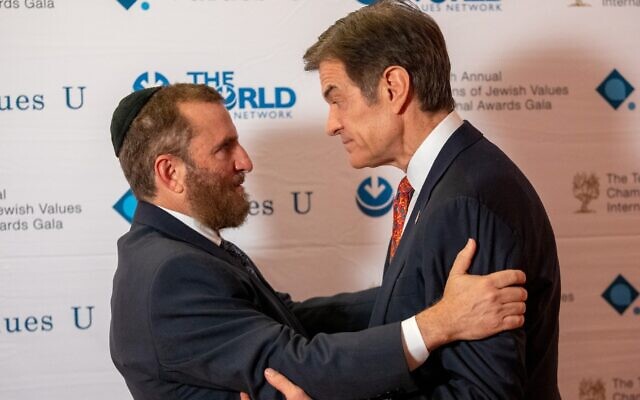 (JTA) — The enduring bond between Rabbi Shmuley Boteach and Dr. Mehmet Oz, forged under the supervision of Oprah Winfrey, has long been known as a textbook example of the Winfrey doctrine that we can all get along.

But the friendship has fractured amid Oz’s bid for Senate in Pennsylvania, where he is running a campaign that Boteach says is “a tragedy for the Jewish people.” After enthusiastically welcoming Oz’s candidacy a year ago, Boteach says he is upset that his old friend, who has been endorsed by Donald Trump, appeared until recently to have endorsed the former president’s lie that he won the 2020 election.

Boteach also is upset that Oz’s campaign has made an issue of a stroke that the Democratic nominee, John Fetterman, had several months ago, and that Oz, a dual Turkish-American citizen will not call the 1915 Ottoman massacre of Armenians a “genocide,” as many scholars have concluded it was.

“The man running for Senate is not Dr. Oz. This person is unrecognizable to me,” Boteach told Rolling Stone. Oz, he said, has become an “election-denying, genocide-denying caricature of an extremist.”

Boteach made the comments to Rolling Stone in a story posted Tuesday that expands on critical comments the celebrity rabbi has previously outlined. Rolling Stone also published excerpts from private emails that Boteach sent to the Oz campaign imploring it to change course, to no avail.

Boteach, a Republican, will not endorse Oz’s opponent, Democrat John Fetterman, but was especially offended by the Oz campaign’s attacks on Fetterman for having had a stroke. Boteach’s father died of a stroke at the beginning of the coronavirus pandemic.

“Anyone who has a modicum of self respect will condemn the actions of a campaign that mocks a stroke victim, especially when it’s the campaign of America’s most famous doctor,” Boteach wrote last month in an email to Oz and the campaign.

Oz, a physician who became famous through TV talk shows, met Boteach, an Orthodox rabbi who has advised multiple celebrities including Michael Jackson and Roseanne Barr.

“Dr. Oz and I became colleagues back in 2008 when we both worked for Oprah Winfrey on the Oprah and Friends Radio Network,” Boteach wrote in the Jerusalem Post in December, lauding Oz’s bid for the Senate. “There were so many special and legendary people on the network, from Oprah herself, to Maya Angelou, and to Gayle King. But the one I bonded with the most and the quickest was Dr. Oz.”

Boteach traveled to Israel with Oz, and to the Jewish settlement in Hebron, where they danced the hora with Israeli soldiers guarding the Tomb of the Patriarchs.

The Republican Jewish Coalition has enthusiastically embraced Oz, and has made a note of the fact that he is a Muslim who is close to Israel.

Boteach said Oz’s disinterest in condemning Turkish president Recep Tayyip Erdogan was also a mark against the candidate because of Erdogan’s criticism of Israel. But in recent weeks, Israel and Turkey have warmed their relations, and Erdogan announced this week that he would visit Israel for the first time.

Oz is not the first friend and political candidate to fall out of Boteach’s favor: He was once close to New Jersey Sen. Cory Booker, whom he mentored when Booker was Rhodes Scholar at Oxford University, but broke with Booker after the senator voted for the 2015 Iran nuclear deal, which Boteach regards as an existential threat to Israel. PJC