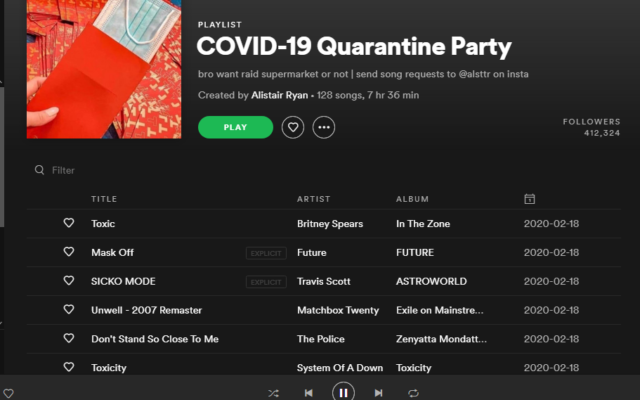 The quarantine playlist. It’s a thing.

Pop, rock, energetic songs, one hit wonders, 80s music, songs that make you think of college, artists you should have listened to before now. Americans are engaging with music in ways they hadn’t pre-COVID-19. For some that means creating their own playlists. For others, it’s listening to curated music on streaming services like Spotify or Pandora, or just grabbing their favorite CDs or albums, a set of headphones and finding a quiet room to hear music in a way they haven’t in years.

“In today’s climate, what makes a good playlist is anything upbeat,” said Mark Davidson, the author of the blog “Heard But Not Seen,” which focuses on new and live music.

While the 20-year music biz veteran – he’s worked as a booking agent for independent bands and at Ticketmaster – and his wife are home during the pandemic, they’re listening to “stuff with a good rhythm. You know, we’re not going for singer-songwriter, mellow, coffeehouse type stuff.”

Davidson believes that once people are able to go out and interact with music the way they did in the past, the playlists created during a listener’s time at a home will serve “like an old school mixtape did. It will capture a moment in time. Like a tape from that one year in college when you hung out with that group of people. These playlists will be similar.”

Australian roots rockers The Teskey Brothers, Irish musician Dermot Kennedy and George Ezra are all new artists the blogger is exploring while at home. He is also listening to the Black Crowes and brass bands.

Jonathan Fischer, a manager for Advanced Robotics Manufacturing, spends his spare time moonlighting as a DJ at events for the Jewish Federation of Greater Pittsburgh, South Hills Jewish Pittsburgh and other organizations and local families.

He thinks that the quarantine playlist is here to stay.

Music streaming service Spotify has confirmed that ubiquitous themed playlists have become the modern mixtape, shaped by how the coronavirus is affecting people’s lives. The company conducted a data analysis of its users between April 17 and May 17 and found that playlists using keywords related to “haircut” and “hair dye” have seen a 50% rise. Popular songs on these lists include “Complicated” by Avril Lavigne and “High Hopes” by Panic at the Disco. Music lists related to baking have seen a 20% rise in popularity. Many of these include the song “Watermelon Sugar” by Harry Styles. Not surprisingly, the theme “work from home” has seen a huge increase, rising over 100%. Dolly Parton’s 1980 hit “9 to 5” has seen a resurgence on these lists, hitting the sweet spot between both subject matter and nostalgia.

Fischer said he has created playlists based on his activities and emotions. “Working out, easy listening, quarantine blues. I even have a playlist for driving. They’re all very curated.”

“I actually don’t like listening to the new stuff that’s out there right now,” he continued. Instead, Fischer is opting for instrumental music and soundtracks that evoke particular memories and emotions.
One band currently on repeat for the DJ is the brass band Too Many Zooz, a “busking band” out of New York City.

Al Rosenthal has been working from his South Hills home since March. Typically, the attorney does not have a lot of time to explore music outside of his commute, when he mostly listens to satellite radio.

“Since I’ve been home for two months, I’ve been listening to music more often and in different ways than I normally do,” he said. “I’ve found myself drawn back to 90s music and female vocalists. I made a playlist of things like Veruca Salt, Letters to Cleo and Elastica.

“When we first went to quarantine, my theme song was the Talking Heads ‘Life In Wartime,’” he said with a laugh, “which I thought really captured the mood.”

Mood is a recurring theme in Rosenthal’s listening choices.

“As the stock market was crashing and news of layoffs was mounting and everyone was concerned about the economic situation, I pulled out the Kinks’ ‘Low Budget’ album from 1979, which is written during and about that period of economic dislocation.”

Rosenthal said he’s also been exploring concept albums and listening to albums from start to finish, “which my life doesn’t’ normally allow me to do.”

Other local Jewish Pittsburghers have been using music as a way to find comfort and cope with quarantine in the age of the coronavirus.

Jewish Federation of Greater Pittsburgh President and CEO Jeff Finkelstein recently took part in a popular Facebook trend, posting 10 albums that influenced his taste in music. While still focused on the business of running Federation, he noted that he’s been listening to the decidedly unmusical The Harvard Business Review Management Tip of the Day ‘and lots of 80s music while I exercise.’”

Brian Schreiber, president and CEO of the Jewish Community Center of Greater Pittsburgh, has been going into office every day, overseeing his organization’s services. When he does have an opportunity to listen to music, he focuses on three “retro acts: Arik Einshtein (classic Israeli singer), the Beatles, and Billy Joel.”

For Drew Barkley, executive director of Temple Sinai, it has been the Americana of Emmylou Harris and the Latin-tinged blues of Santana, and similarly styled music heard on Pandora’s artists’ stations. The Harris station “brings in a lot of the recently departed John Prine,” Barkely said.

Squirrel Hill Health Center CEO Susan Friedberg Kalson said that when she and her husband David break away from their workday they use Spotify to listen to a lot of folk, country and bluegrass.

“We’re rediscovering Alison Krause & Union Station and a group in frequent rotation, that we first heard the morning of the Iowa primaries on NPR, is The Wellpennies. Mumurations is well worth a listen or ten. We’re enjoying sounds that are at once melancholy and hopeful which suits the mood right now. And when I really need a release, I’m listening to Kasey Musgraves, especially the album “Pageant Material” and the song “Biscuits.”

As Americans have shifted away from spending a lot of time in their cars and have been unable to go to gyms – both places where music is traditionally consumed – music streaming has actually gone down in favor of gaming, YouTube, television and Netflix.

That’s true for Melissa Haviv, assistant director of Classrooms Without Borders. “My son and I are watching all the Marvel movies in the official Marvel Cinematic Universe Timeline. We recently completed both volumes of ‘Guardians of the Galaxy’ and it is now my ‘playlist of the week’. Who knows what next week will bring?”

Haviv is quick to point out, though, that she still listens to music and that her musical tastes are varied. “I can go from Disturbed to Nora Jones to Shrek (one of my favorite playlists) in a snap,” she said.

How has the COVID-19 outbreak affected the way you listen to music? Have you created playlists on Spotify? Are you spinning vinyl from your high school days? Send an email to letters@pittsburghjewishchronicle.org and tell us what songs have gotten you through these unusual days of sheltering-in-place. PJC