More than 400 people attended the Jewish Federation of Greater Pittsburgh's "Stand Against Antisemitism" rally at the City County Building. Photo by David Rullo.

Amidst the rhythm of a Tuesday afternoon rush hour, about 400 Pittsburghers gathered on June 1, at 6 p.m. on the steps of the City-County Building downtown for a rally dubbed “Stand Against Antisemitism.”

Organized by the Jewish Federation of Greater Pittsburgh, the rally was a response to the recent 400% uptick in antisemitic incidents around the globe, including violent attacks in California, Florida and New York.

Leaders from the broader community, including elected officials, addressed the crowd in solidarity with the Jewish community.

Jewish Federation President and CEO Jeff Finkelstein opened the rally, calling antisemitism “the oldest form of hate.” He presented stark statistics, including the fact that Jews make up about 2% of the United States population yet are the victims of 60% of religion-based hate crimes.

After recalling the attack at the Tree of Life building, Finkelstein said the Jewish community must work with its allies to crush both antisemitism and all other forms of hate and bigotry.

U.S. Rep. Conor Lamb (D-District 17) spoke of the recent surge of antisemitism, stressing that “violent acts of antisemites cannot be disguised as a form of activism.”

“Let me be absolutely clear,” Lamb told the applauding crowd, “Israel is a friend of the United States. Israel is the only democracy in the Middle East. The existence of Israel is a fact that is non-negotiable.”

Nate Nevala, district chief of staff for U.S. Rep. Guy Reschenthaler (R-District 14), spoke on behalf of the congressman, who was unable to attend the rally, saying the rise in violent antisemitic incidents and rhetoric must not be tolerated.

Pennsylvania State Rep. Dan Frankel (D-District 23), who represents Squirrel Hill, said there are “countless paths of hatred that paved the way to the devastating events on Oct. 27, 2018,” referring to the massacre at the Tree of Life building. “We’ve been standing in solidarity with all groups that have been targeted and harmed by white supremacists. Just as individuals stand against hatred, so too must our law.”

In January, Frankel introduced a series of bills that would impose stiffer penalties on those convicted of hate crimes.
Pittsburgh is “a special community,” said Allegheny County Executive Rich Fitzgerald, “but we are less special when a group of people is targeted because of how they worship. Our community has no place for the hatred, the antisemitism, the bigotry and the domestic terrorism that occurs against people because of how they worship.”

Recalling the events of Oct. 27, Pittsburgh Mayor Bill Peduto said, “It’s unfortunate that this little part of the world is recognized as the scene with the most horrific attack of antisemitism in the United States.”

“Anti-Zionism,” Peduto added as the crowd applauded, “is nothing more than antisemitism.” 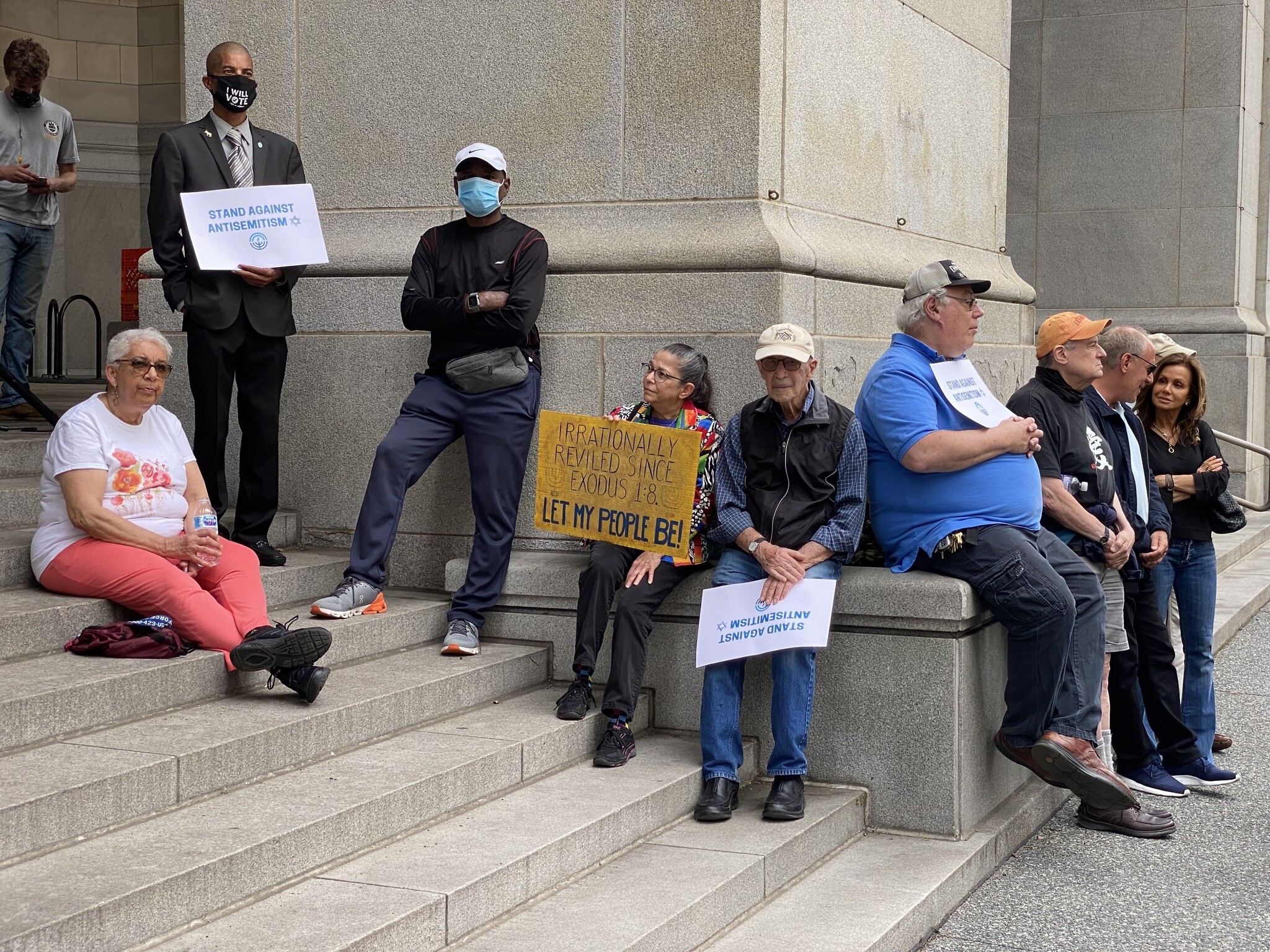 The Asian American community has also experienced a recent sharp increase in incidents of hate. Marian Lien, president of the Organization of Chinese Americans, a civil rights group dedicated to advancing the well-being of Americans of Asian and Pacific Islander descent, said there have been more than 6,600 cases of hate against Asian Americans in the United States in the year after the pandemic began.

“The one community that immediately came to our aid and immediately stood up and said, ‘How can we help?’ was the Jewish community,” she said.

Tim Smith, CEO of Center of Life and pastor of Keystone Church of Hazelwood, spoke of the importance of education to help eliminate hate. The Squirrel Hill native recounted learning about the attack at the Tree of Life building while on a run, then immediately reaching out to the congregation to see how he could help.

Tree of Life Rabbi Hazzan Jeffrey Myers recalled the antisemitism he experienced as a child, including finding two swastikas in his driveway with the message “Jeffrey is a dirty Jew.”

“That was my introduction to Holocaust education,” he said.

Myers, who was leading Shabbat services when the 2018 massacre occurred, said he was tired of being a victim of antisemitism and would no longer be one. He suggested the way to combat antisemitism is by “doing more Jewish.”

Laura Cherner, director of the Federation’s Community Relations Council, closed the rally by reiterating the sharp rise in antisemitic incidents over the past few weeks, noting that the phrase “Hitler was right” was posted more than 17,000 times on social media over a one-week period.

“Where were our friends?” she asked. “Why has it been so uncomfortable to name it? Why has silence been politically correct?”
She called for minority communities to support one another when attacked.

“I’m prepared to stand with you if and when that happens,” Cherner said. “I hope you will do the same.”

Squirrel Hill native Jeff Tate attended the rally while on a break from work in the Frick Building. Wearing a “Stronger Than Hate” T-shirt, Tate said he came to the event to show support for Israel and to stand against antisemitism.

“I feel it’s an honor to be here,” he said. “As a nation, we need to be a voice because we can’t keep silent any longer. Never again means never again.”

Others expressed concern about the possibility of antisemitic attacks in Pittsburgh.

“If you had asked me a couple of years ago, I would have said ‘no,’ but I am [concerned], honestly,” said Maxine Kisilinsky.
Shawn Brokos, the Federation’s director of security, said Pittsburgh has seen an uptick in antisemitic incidents recently, although none have been violent or direct threats against individuals or Jewish institutions.

Pennsylvania State Rep. Ed Gainey (District 24), the Democratic nominee for Pittsburgh mayor, didn’t speak at the rally but was in attendance.

“It’s important for me to be here, because this is what I talked about, ending hate,” Gainey said. “The Jewish community, African American community, Latino community, Asian community, we’ve all had to deal with hate. It’s senseless. It’s destructive.

The rally was sponsored by more than 40 Jewish organizations, including the Pittsburgh Jewish Chronicle. PJC