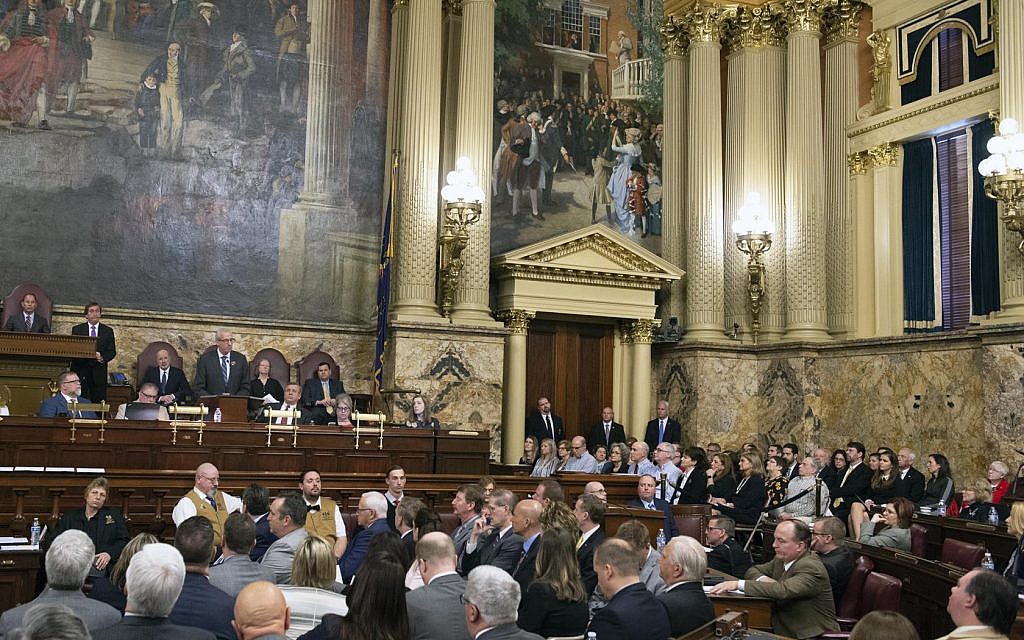 Rep. Dan Frankel speaks during the 'Stronger Than Hate Day' as the Pennsylvania Legislature held a rare joint legislative session to honor the victims of the terror attack at the Tree of Life building. Photo courtesy of PAHouse.com

The last several weeks were rough in Harrisburg. As an ardent defender of abortion rights and as the Democratic chair of the Pennsylvania House Health Committee, I helped lead the fight against several bills that I believe would dramatically turn back the clock for this commonwealth’s women.

Abortion is a topic that inspires passionate and deeply felt arguments all around — something I always try to remember even as I go to battle for women’s reproductive autonomy. But it also inspires something else, in casual comments from lawmakers, constituent letters, speeches and letters to the editor. Not an abortion debate yet has gone by without a comparison to the Holocaust.

I want to be clear about one thing: The Holocaust has no place in this abortion debate. Questions of reproductive justice should not be compared to the Holocaust.

And neither should anything else.

The systematic, state-sponsored scapegoating of millions of people as a justification for torturing, starving and murdering them does not have any comparison.

Just as nothing is “like” the American enslavement of Africans and their descendants, or the Cambodian genocide by the Khmer Rouge, or the slaughter of 800,000 people in Rwanda in 1994. There are some worldwide tragedies that are too complex and too devastating to be used to explain something else.

To be fair, anti-abortion advocates are not the only ones who have dabbled in Holocaust analogies. I’ve heard it from both ends of political spectrum and I’ve heard it from fellow Jews. Regardless of the speaker or the topic, I feel strongly that we can all make our impassioned arguments about abortion and immigration policy and whatever else without co-opting the language of the Holocaust.

I don’t call it out every single time. To be honest, that’s a full-time job, and it’s sometimes a detour for which we just don’t have the space. At times, I don’t have the mental space to educate the unwilling about the harm of using the horrors of the Holocaust as a rhetorical flourish.

But it’s starting to feel dangerous. Because the more the Holocaust gets used to make comparisons, the less potent it’s vital message becomes. When lawmakers and others make comparisons to the Holocaust, they are attempting to aggrandize their own grievances. And they end up diminishing the power of what we must learn. Yom HaShoah. Never Forget.

When I was a child, Holocaust survivors kept their experiences tangible for the rest of us. Their stories had names of playmates never seen again, the head-spinning contrast of before and after, the thousands of impossible choices and the physical scars of suffering. Many had tattoos on forearms, crushing survivor’s guilt and lifelong sorrow to balance against life’s many joys. Some talked about it and others never did, but the survivors’ very existence made it painfully real. Six million Jews, yes — but also a sister, a father, a schoolteacher.

Few survivors are left now — just the youngest children of the time are still with us. Their stories do live on for those who seek them out. There are many oral history programs that exist for this purpose, including the USC Shoah Foundation, created by Steven Spielberg, to which nearly 1,000 Pennsylvanian Holocaust survivors have contributed their stories.

Maybe that kind of education will help us ensure that the systematic extermination of Jews and other groups deemed unfavorable is not diminished into shorthand for “bad” or “unjust” or even “tragic.” Survivors gifted us these stories, in part to protect future generations from repeating history.

And while nothing is “like” the Holocaust, we can and must learn from its horrors and recognize its precursors. Now, when antisemitism is on the rise and an ugly nationalism has made its way into the mainstream, we absolutely should reflect on the decades of political life that laid the table for state-sponsored genocide. That’s different from comparing a masking order to a Nazi edict or abortion healthcare providers to Hitler’s death camps.

We must never stop talking about the Holocaust, but at the same time protect the power and potency of the words. Both things are possible, and both are necessary. PJC