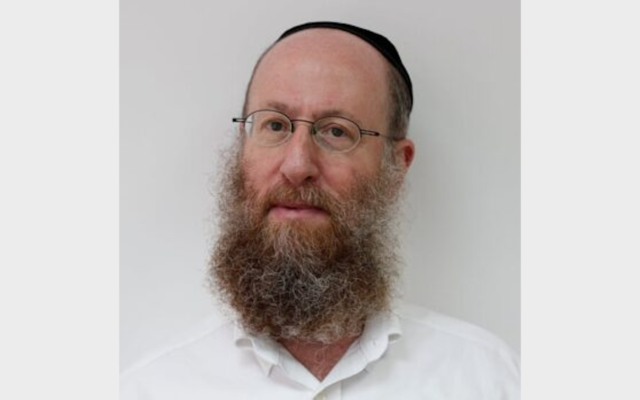 Political affiliation played no role in my decision. I’m a registered Democrat who often votes Republican. I was raised in an Orthodox Jewish family in North Jersey. We cried when Richard Nixon defeated Hubert Humphrey in 1968 and exulted when Ronald Reagan routed Jimmy Carter in 1980.

This year poses a fresh dilemma.

President Trump has proven himself as a consistent supporter of Israel. We feel an affinity to the president’s cadre of Orthodox Jewish advisers, including Jared Kushner. Jared’s father, Charlie, was my high school classmate at the Jewish Educational Center in Elizabeth, New Jersey. The Kushners wore their commitment to Jewish causes and Israel on their sleeves.

I also became professionally acquainted with Joe Biden in the 1980s, interviewing him at length when he was Delaware’s junior senator and I served as news director at WDOV-Radio in Dover, Delaware. I always found Biden well-versed in both domestic and foreign policy, with nuanced views on the issues. We’ve lost contact over the years, but no one can convince me Biden’s morphed into a reckless socialist.

I’m only one man, one vote. But in my current role as editor at large for Mishpacha Magazine, the most influential Orthodox weekly with a quarter of a million readers globally, I’ve kept my finger on the pulse of that community since 2004.

Our readership is overwhelmingly pro-Trump. That doesn’t mean they like everything he says or how he says it. As Sen. Lindsey Graham once put it, the president is a street fighter. But Orthodox Jews see Trump as their man on the street, standing up for causes they believe in, including Israel and religious freedoms by appointing conservative judges to federal courts.

Recent events have only solidified Trump’s standing, despite the coronavirus pandemic, which most Orthodox Jews view as primarily a health issue and not one that politicians can solve. Biden can critique Trump from the basement of his Wilmington, Delaware home all he wants, but he can’t prove retroactively that he would have done better.

Aside from catching COVID-19, the two outbreaks Orthodox Jews fear most are a breakdown of law and order, and rising anti-Semitism.

To an extent, the two dovetail.

American Orthodox Jewish voters are concentrated in and around major cities, where Jewish institutions have spent millions of dollars since 9/11 on security upgrades. We have watched in dread as this summer’s legitimate demonstrations against police brutality against Black Americans quickly gave way to rioting and looting, with big-city mayors looking the other way. Jewish businesses were targeted at a time when Orthodox Jews, with their unique dress, are already on edge, having been singled out for beatings and assaults in increasing numbers in recent years.

Neither Trump nor Biden can wave a magic wand and provide redress for hundreds of years of grievances. That’s a formidable task for the next administration, and probably many presidents to come, no matter who wins this year. But in the meantime, we must feel safe at home, on the street, in our synagogues and yeshivas and at our places of business.

Law and order must be restored. Police should be retrained and reeducated, not defunded. Biden does not support defunding, but Orthodox Jews view the Republicans in general, and Trump in particular, as ready, willing and able to deploy federal resources to restore order. As a senator, Biden championed law and order; however, candidate Biden now walks a tightrope with his party’s progressive wing that tolerates the mayhem.

There are other societal issues that explain why Orthodox Jews have cast their votes in larger numbers for conservative Republicans, such as the family values championed by Ronald Reagan and the Bushes. We believe that marriage is a holy bond between a man and a woman. We also support government funding of secular studies curriculums within parochial schools, as many Western countries do. On those issues, we often have more in common with Evangelical Christians than our fellow Jews, who vote overwhelmingly Democratic, and favor Republican presidents who will appoint more conservative justices to the Supreme Court.

I haven’t even mentioned Israel yet, or Iran. These were bigger campaign issues in 2016 than in 2020, but suffice it to say President Trump has amassed a strong record of solid support for Israel. He has restored sanctions on Iran, moved the U.S. embassy from Tel Aviv to Jerusalem, and recognized Israel’s annexation of the Golan Heights. Let’s not forget his United Nations ambassador Nikki Haley, who took on the entire international community at the U.N. over its obsession with Israel.

Trump’s “deal of the century” for Middle East peace has flaws and faces stiff challenges, despite optimism over the flowering of diplomatic relations between Israel and other Arab nations. But in the minds of many Orthodox Jews, for whom the biblical borders of Israel are sacrosanct, 30% of the West Bank under Trump beats the 4% that Israel was left with under the Oslo agreements that President Obama supported and that a Biden administration would likely revive.

One answer is that many are disturbed by Trump’s divisive rhetoric and the consequent deterioration of public discourse, opening the door for a major uptick in anti-Semitism.

Yes, political dialogue has descended to gutter level. Trump bears his share of the blame for that. Judaism has laws for kosher speech, just as it has for kosher food. Jewish law forbids the use of derogatory nicknames. We’d like to see the president eliminate the name-calling from his political lexicon.

Trump’s diatribes have emboldened far-right extremists and white nationalists. At the same time, Democratic progressives have ramped up their anti-Israel rhetoric, supporting the BDS movement under the banner of free speech. Both parties are guilty of fomenting anti-Semitism. But for an Orthodox Jew, what’s the bigger present threat? A far-right extremist in a distant rural town, or a looter in a Jewish neighborhood?

Anti-Semitism has been alive and kicking for centuries. I haven’t seen any recent polling of KKK voters, and I don’t expect to, but it’s a safe assumption that most vote Republican, whether or not the candidate’s last name is Trump. To label Trump a white nationalist because some of his supporters are is as unfair as branding Biden a socialist because some progressives in his party speak approvingly of aspects of Fidel Castro’s regime.

In the final analysis, among America’s Orthodox Jews, a primary fear propelling support for Trump is the rise of the progressive left. Many Orthodox Jews are pessimistic about the future of their cities and the country as a whole should the progressive agenda be enacted, with its very real potential to transform America into a much more hostile place for religion.

They see Trump as a defender of the values they hold dear, and for them, a vote for Trump in November is a vote to keep the Orthodox Jewish lifestyle viable in the United States. PJC

Binyamin Rose, based in Jerusalem, is the editor at large of Mishpacha Magazine. This piece originally appeared at JTA.org.