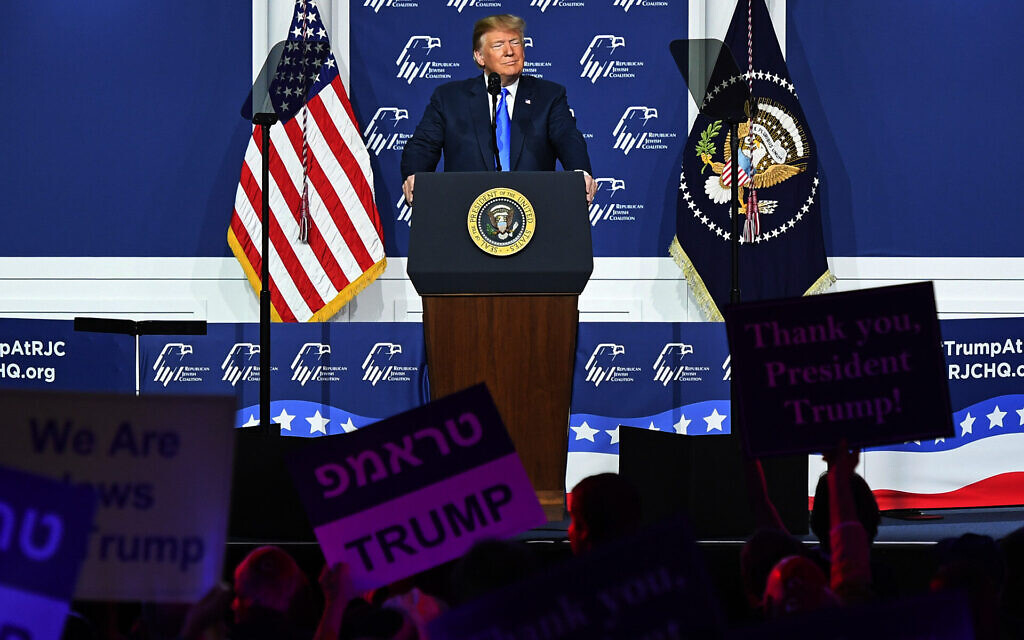 After Joe Biden won the presidency, my liberal friends — mostly Ashkenazi Jews with deep roots in America — were aghast that over 70 million Americans voted for Trump. My Syrian, Persian, Bukharian and Hispanic friends and family members — Jews with immigrant identities — were shocked, too. But most mourned the president’s defeat.

Throughout this election, I kept feeling a sense of vertigo living at the collision point between my life as a scholar working in liberal settings and as a traditional Jew with deep ties to conservative immigrant Jewish communities. This afforded me a dual vantage point to a political division that is not understood or acknowledged by the liberal Jewish establishment: that entire populations of diverse Jews (or Jews of color, depending on one’s definition) lean Republican, and many within them voted for Trump.

Demographic data is scarce about the voting patterns of diverse Jewish communities like the ones to which I belong. But as an Argentine immigrant Jew of Middle Eastern background and scholar of Sephardic Jews, I see that much of the American Jewish political fracture stems from precisely these divergent identities. Our current Jewish communal efforts toward understanding our diverse community overlook conservative-leaning Jews from minority groups. We have learned how to check off diversity requirements without making space for ideological difference.

These challenges are not unique to the Jewish community. Despite progressive conventional wisdom that as America became more diverse the Democratic Party coalition would grow, Trump’s share of ethnic and racial minority votes increased in 2020 compared to 2016. While we can argue as to why this occurred, it is clear that there is no monolithic category of American “people of color” who universally vote for Democrats.

The now-obvious gap between how minorities identify and “mainstream” institutional leaders speak of them is also present in the Jewish community. This gap interferes with our understanding of diversity and ability to perform critical political work in our own communities.

In the course of my work, I have found three most prevalent fallacies that impair Jewish diversity projects: the idea that all diverse Jews are the same, that nonwhite or diverse Jews are all progressive, and rampant tokenism.

Many have a well-meaning but mistaken impulse to flatten the differences within and between diverse Jewish populations. They assume that all Syrian Jews, for instance, have the same political orientations or that all Black Jews would feel uncomfortable with security details at synagogues.

Others commit this flattening between groups, lumping together Black, Asian and nonwhite Middle Eastern Jews as if they all see themselves as parts of the same communities with shared goals and interests. One example is the way some use the term “Jews of color” as a catchall phrase that includes all kinds of populations — Black Jews, Middle Eastern Jews, sometimes even all Sephardic Jews and Hispanic Jews.

Yet we have no indication that these diverse populations identify as part of the same group, use this label or have shared interests. In fact, the data suggest otherwise. One prominent example relates to Hispanic Jews in America. Although these Hispanic Jews — mainly from Mexico, Venezuela and Argentina — are typically the largest group assigned by scholars to estimates of Jews of color, most are likely to identify both as Hispanic and white.

In other words, although they are increasingly labeled as Jews of color, Hispanic Jews in America are just as likely to identify as white. (For more on Latino Jews in America, including their negotiation of whiteness, I recommend Laura Limonic’s fabulous book “Kugel and Frijoles.” )

An unintended consequence of this between groups flattening is that it obscures some needed anti-racist work. When we group together all diverse or nonwhite Jews, it actually undermines what we are trying to achieve. Black Jews, for instance, face greatly different challenges given the long history of anti-Black racism in America, including in our communities, than, say, white-identifying Hispanic Jews or Sephardic Middle Eastern Jews.

Categorizing a group with a term the community doesn’t actually identify with is especially problematic in the case of immigrant Jewish populations, which are often labeled with broad American racial or ethnic categories foreign to their immigrant experiences.

This summer, I participated in several private roundtables focused on questions of representation in which diverse Jews were described as fully aligned with progressive ideologies. This is demonstrably untrue. While liberals in my newsfeed were arguing this summer that the best way to honor Jews of color would be to march with Black Lives Matter on the streets, many of my Hispanic friends were anxious about BLM’s anti-capitalist discourse, and my Middle Eastern Jewish friends were more likely to be dropping off cookies at police precincts than supporting anti-racist demonstrations.

As Limonic says, “Latino Jews are not, on the whole, politically conservative,” but there are electorally significant populations of Hispanic Jews who defy this mold. According to the 2019 American Jewish Yearbook, Florida, a battleground state, contains the third largest population of Jews in America. Since Jews tend to vote at higher rates than other Americans, and Jews in Florida at higher rates than other Jews, the Jewish vote is particularly important there.

While we do not have data on how Jewish Hispanics voted in Florida, my own anecdotal interactions with Latino Jews there indicate that many have immigrant identities that contribute to their support of Republicans. In particular, Cuban Jews — many of whom experienced the tyranny of left-wing regimes — oppose what they perceive as the Democrats’ affinity toward communism or socialism.

Among Middle Eastern Sephardic Jews living in America, many share family histories of having escaped Arab nationalism and anti-Semitism in the Middle East. Their recent experiences of Jewish displacement have led many to identify with a realpolitik approach in which a “strongman” politician can best compete in the international arena to protect both Israel and American interests. Moreover, many are socially conservative and identify with Trump’s economic policies.

In her widely shared 2009 TED talk, Nigerian writer Chimamanda Ngozi Adichie highlighted what happens to underrepresented populations when they are mainly portrayed through monolithic single stories. One danger of single stories — or of ideologically monolithic stories — is that we only hear from minorities when they fit the majority culture’s narrative. In the liberal media, those who are ideologically progressive are increasingly represented, but people of color who question progressive orthodoxies are largely absent.

Some years ago I was invited to speak at a panel about being a Sephardic Jew. One of my co-panelists made a comment about how my own experiences were a powerful window into my community. Her words so troubled me that I turned to my mostly Ashkenazi crowd and said a version of the following: “I want you to consider that I am on this stage because I am a progressive feminist who knows how to speak to a pluralistic and liberal audience. I share many ideas and values with my Sephardic family, community and with the Sephardic Jews I have researched. At the same time, most of them are politically conservative. I want us to think about what it means to have representative ethnic diversity if we were to take moral and political diversity seriously.”

If you want to appreciate how badly these three fallacies have led us to misunderstand Jewish diversity, consider how liberal Jewish organizations choose to label diverse communities versus how those communities choose to self-identify.

More often than I can count, I have been mislabeled as a Latinx, Mizrahi or a Jew of color. Yet I do not use any of these terms to describe myself, mainly because my communities of origin do not use these labels.

The overwhelming majority of American Hispanics — 97%, according to the Pew Research Center — do not use the term Latinx, a word that reflects American progressive gender norms more than the language used in Latin America by its indigenous people. The pan-ethnic category of Mizrahi reflects a uniquely Israeli context and has not emerged organically in my American Sephardic communities. And the classification of Jews of color has distinctly American racial undertones that feel foreign to my personal identity as a nonwhite immigrant.

Of course, there are populations of diverse Jews who deserve visibility, who proudly identify and organize through these and other identities. But every time I am called a name that does not reflect my identity, it reminds me that we have a long way to go as our communities undertake what should be a complex and disruptive American Jewish diversity project.

Many liberal Jews were shocked that so many Jews could have supported the president, much less diverse Jews. But if we want to truly understand those who hold views different than ours, we must take the time to get to know diverse communities rather than ascribing our own political beliefs and assumptions onto others. In the wake of this election, my commitment for my beloved country’s democracy leads me to reaffirm the difficult work of working to move hearts and minds and cultivate common cause with political opponents. This work begins at home. PJC

Mijal Bitton Ph.D., is a scholar in residence at the Shalom Hartman Institute of North America and the Rosh Kehilla of the Downtown Minyan. This piece was originally published by JTA.