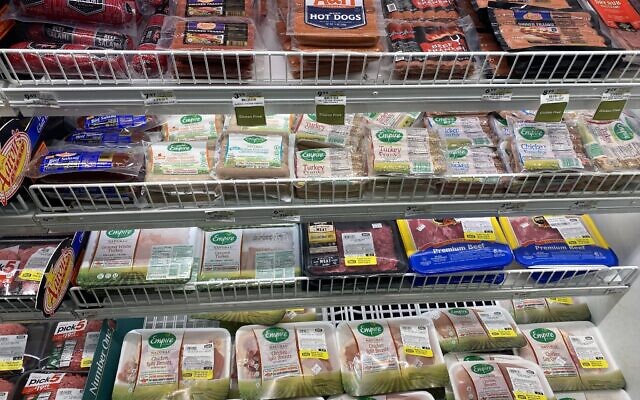 Rebecca Spiegel regularly visits three or four different stores to feed her kosher diet — meats at Murray Avenue Kosher or Costco, pre-packaged items at Aldi — and lots of other products at the Squirrel Hill Giant Eagle supermarket, which, over the years, has become a Murray Avenue landmark.

Spiegel said “there’s been an increase” recently in the number of kosher items available at Giant Eagle; they increasingly take up more and more of the relatively small supermarket’s shelf space.

Spiegel is right about the increase, said Paul Abbott, who works in Giant Eagle’s corporate offices as the senior director of Market District.

“As a general trend, pre-pandemic, the two-year view or the three-year view, kosher items’ growth is slightly better than overall foods,” Abbott told the Chronicle. “It’s slightly outpacing the trends.”

Abbott said “mainstream groceries” are seeing an increase in manufacturers identifying their food and products as kosher. In certain neighborhoods, historic trends — kosher items in the Giant Eagle chain’s approximately 175 stores date back many years — are also growing.

Abbott said a big part of that is Giant Eagle paying increased attention to trends — and demand.

“We do look very closely at neighborhoods where our stores are located and follow needs accordingly,” he said.

To come up with its kosher lineup, like any other product lineup, Giant Eagle looks at “syndicated data from our marketplaces and also our distributors,” internal data, “more anecdotal numbers,” discussion with select suppliers and “feedback from our store teams,” he said.

He said he could not provide data on the number of kosher product suppliers who work with Giant Eagle — nor any change in them, though he said some of the chain’s largest specialty providers are Manischewitz, Kedem and Empire. Giant Eagle also partners with smaller, niche companies for its kosher stock, he said.

Breslov is one of those smaller companies. Based in Columbus, Ohio, the group distributes kosher kitchenware items to Giant Eagles in Ohio and Pennsylvania.

Rabbi William Goldberg, who helps head Breslov, said he sees increased demand for his company’s inventory as two-fold.
“I think that there’s more of an awareness [of kosher items] in the non-Jewish communities,” Goldberg said. “And I think there’s growing demand in the Jewish community.”

Breslov, which started selling kosher kitchenware and mezuzahs, has been working — increasingly — with Giant Eagle for about 20 years, Goldberg said.

“We started off with one or two stores and it’s grown since,” he said.

Abbott said his company’s relationship with area kosher certification bodies, like the Vaad Harabanim of Greater Pittsburgh, preceded his involvement with Giant Eagle, and he could not place a date on when a decision was made for the two groups to start working together.

He also said it’s “a little bit difficult to quantify” the number of kosher products made available in specific stores, the number of manufacturers or distributors providing kosher items, or the respective shelf space that is given to kosher foods in select markets.

Giant Eagle store managers and staff were not available for comment.

“There’s more mindfulness [about kosher products] from the manufacturers,” Abbott told the Chronicle. “We do our very best to be in tune with our community.” PJC