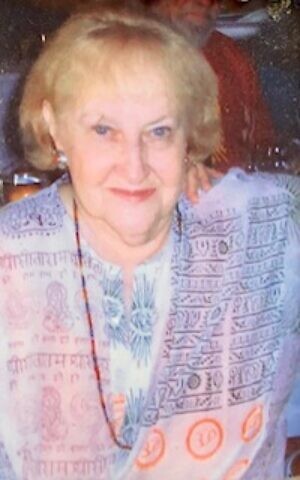 KREISMAN: Janet F. Kreisman, 95, of Squirrel Hill, died at her home April 5, 2022, following a brief illness. The first of Kreisman’s many careers was as an ad writer in her native Philadelphia, where she also wrote and produced a local television show. Sponsored by the Philadelphia School of Charm and Modeling, “Your Key to Happiness” offered fashion, beauty and exercise tips, as well as interviews and performances by visiting celebrities. Guests included singer Nat King Cole, who Kreisman remembered as very charming.
After a year and a half in Santiago, Chile, for her husband’s work, Kreisman and her family came to Pittsburgh in 1963, moving into a house in Squirrel Hill that she occupied until her death. In 1967, Kreisman opened a branch of the acclaimed New York boutique Paraphernalia. That first store, on Meyran Avenue in Oakland, was joined by four more, including two simultaneously at opposite ends of the Monroeville Mall. The stores featured the hip fashions of the day and provided employment to a generation of teenage girls and 20 something women. Her daughter, Julie, recalled that Kreisman would return home after a full workday, make dinner for her family, and go back to work. Later ventures included the independent Parafemina boutique and her final retail venture, The Glitzy Collection on Noble Street in Swissvale. After retiring from retailing in 1994, she reinvented herself and worked part time in the specialty pharmacy business, where she demonstrated a gift for convincing health insurance companies to pay.
Kreisman never wavered in her zeal for liberal politics, beginning with her 1948 support of Henry Wallace’s Progressive Party campaign for the presidency. Through that campaign she met her husband Arnold Kreisman, from whom she was divorced in the late 1970s. She was an active proponent of the civil rights movement and was an activist against the Vietnam War. She marched on Washington for both causes and was often seen at Pittsburgh marches for a variety of causes. In 1964 she was a founder of the still ongoing 14th Ward Independent Democratic Club, perhaps the most influential group of its type in Pennsylvania, and remained on its board for decades.
Kreisman said her greatest accomplishment was raising her daughters, Erika P. Kreisman and Julie K. Freeman, both now Pittsburgh attorneys. She also had tremendous pride in her grandchildren, Alex Goldblum and Katie Freeman, and son-in-law Irv Freeman.
Kreisman was born in Philadelphia in 1926 to Eva and Max Friedman and was raised there. In addition to her parents, she was preceded in death by brother Eddie Sachs and sisters Francis Benson and Ruth Krouse. Along with her daughters and son-in-law, she is survived by her grandchildren and nieces and nephews.
Service and interment private. Please contact Ralph Schugar Chapel, Inc., at 412-621-8282 or the family with inquiries about memorial plans. Donations may be made to ACLU of Pennsylvania (aclupa.org), the Holocaust Center of Pittsburgh (hcofpgh.org), or a charity of the donor’s choice. PJC