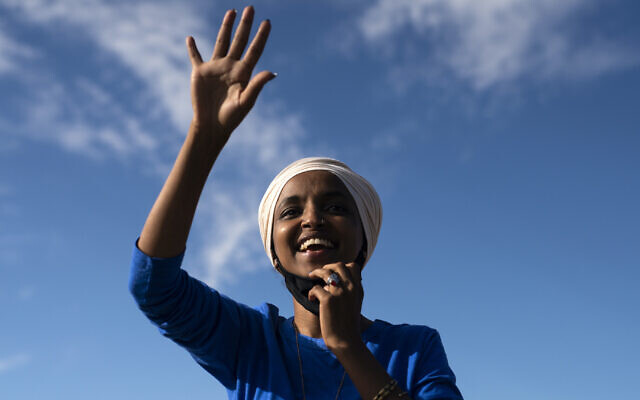 (JTA) — Rep. Ilhan Omar, the first-term congresswoman who has been criticized for comments on Jewish influence in politics and supporting the boycott Israel movement, has won her primary against a progressive rival who received support from pro-Israel groups.

Antone Melton-Meaux conceded on Tuesday night with results showing Omar well ahead. Her solidly Democratic district, which includes Minneapolis, practically ensures that she will serve another term in Congress.

Omar is one of only two current members in Congress who openly support the Boycott, Divestment and Sanctions movement. The other is Rep. Rashida Tlaib of Michigan, a fellow member of the progressive group of female lawmakers known as “The Squad,” who have been critical of Israel’s policies. Some pundits see their influence as symbolic of the Democratic Party’s gradual leftward shift on Israel.

In Congress, Omar has made herself a singular target, however, for comments she made in early 2019 about the pro-Israel lobby AIPAC. Critics say she insinuated that the group pays politicians to support Israel, and many found it an extension of anti-Semitic tropes about money, Jews and political influence.

Melton-Meaux came out strongly in support of Israel and alleged that Omar did not have a sufficient relationship with the local Jewish community. Pro-Israel groups and donors poured money into the race in the hopes of unseating Omar.

“We all know that unseating an incumbent is an uphill battle, but Melton-Meaux was a strong candidate who made incredible inroads – far beyond what political analysts and observers had initially predicted,” the heads of the Pro-Israel America political action committee said in a statement on Wednesday. PJC