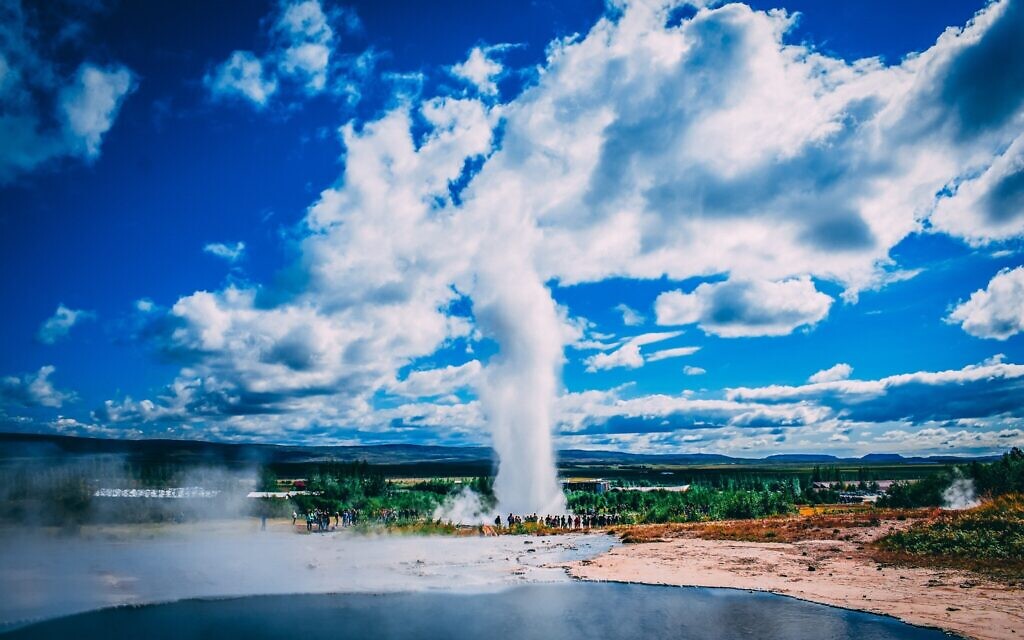 A scene in Iceland (Photo by Rudolf Kirchner via Pexels)

Sundhöllen, a public swimming pool in Reykjavik, Iceland, is located at Barónsstígur 45a, 101. The building’s simple, unadorned exterior appears to be that of a government building, or perhaps a prison, and it gives no indication of the deep clear pools and smoky hot tubs hiding on the other side of its high white walls.

Though Sundhöllen isn’t one of the more glamorous thermal baths for which Iceland has become famous, it is one of the oldest and it’s an actual meeting place among the capital city’s locals. It’s also where I was soaking one gray-skied evening two years ago when I first realized the more negative implications of my impending conversion to Judaism.

I was traveling through Iceland with my brother, doing all of the touristy things there: eating cod, hiking to craters, buying expensive sweaters and swimming in every pool that I could find. I had been in Sundhöllen multiple times, but in a hot tub on one particular evening, I kept hearing the terms “white supremacist” and “neo-Nazi” holding space in my fellow hot tub goers’ conversations. I don’t speak Icelandic, but through the way many Icelanders pepper their conversations with English vocabulary, I could sometimes assume the subjects about which they were speaking. After a few minutes I saw three figures, two men and one woman, stepping into the water, and through the rising steam it was clear to me that they were the neo-Nazis that people were speaking of.

There’s a saying that when we’re stripped of our material adornment, we can more clearly see how similar we all are. I can tell you now that this is not always the case. While their clothes and other accessories, which could have provided clues to their ideological beliefs and social class, were left in the lockers, a more permanent version of who these people were came with them. Their heads were shaved, they were wearing black uniform bathing suits and were covered in tattoos, with some of the identical symbols and images: the Nordic resistance movement insignia, the life rune, SS bolts, etc. Only the classic swastika was missing.

I wondered what it would be like if I had seen one of them on the street that day while on a tour. Would they have been wearing black leather jackets covered in offensive patches, serving as a warning for the conscientious to stay away? Or would their true selves remain unseen, hidden beneath a homemade turtleneck sweater and chinos from Zara?

Similarly to the way these neo-Nazis may have hidden racist and anti-Semitic symbols underneath misleading outfits, I was unintentionally hiding beneath my own Aryan-like physique an element of myself that many white supremacists would believe made me a threat: I was practicing Judaism.

I officially began my conversion process a few weeks prior to the trip but, at that point, already considered myself Jewish. Though I was slow to begin the official process, I had done the required reading, watched the films, attended Shabbat services at my local Reform synagogue regularly and was an active member in the congregation’s tikkun olam society. I was invested in my local community and felt settled into a Jewish identity, regardless of a conversion certificate.

What bothered me more than sharing a spa day with possible neo-Nazis was the realization, for the first time, that anti-Semitism was slowly becoming a personal problem. For many converts, there comes a time when they becomes we, theirs becomes ours.

Though my privilege as a white person is clear and will always play a huge role in the way society responds to me, my conversion to Judaism puts a new target on my back, something I had only briefly considered when working my way through the conversion checklist.

Unlike Orthodox Jews and other members of more visible marginalized groups, my Jewishness was not apparent on me physically. I’ve sat around enough tables full of challah and matzah ball soup to know that most people think I don’t “look Jewish” — whatever that means. I have, however, been told I look a lot like my younger brother, a white, blue-eyed Christian man who was sitting beside me in the hot tub that day. I wondered how his experience and fear in that moment was different from my own. We are the same blood, but I represent a threat to neo-Nazis and he does not.

When we talked about it over scoops of ice cream later that night, he told me it was surprising to have experienced neo-Nazis in Iceland, a country famous for its equality and peaceful society, but he didn’t reveal having felt anything beyond the surprise.

I took this experience home with me though, and it helped me understand the gravity of my conversion. It was the first time that fear made me reconsider my conversion and the choices I was making in my public Jewish life. It was the first time I truly looked inward and asked myself the hard question required of converts: Was I ready to accept the realities of anti-Semitism?

I also asked myself the question so many of my friends had asked already: As a gay man, why would I want to add an additional target on my back?

I used to find the imagery of a target on someone’s back too grotesque and melodramatic for the context of a religious conversion, but since my encounter with presumed neo-Nazis in the hot tub that day, the question has become even more reasonable. On top of all-too-common news of anti-Semitic threats and vandalism, there have been synagogue shootings and Jewish-oriented hate crimes around the world.

At the time of this writing, we are dealing with the aftermath of domestic terrorists storming and overtaking the U.S. Capitol building. Some of the rioters waved Confederate flags, others held signs referencing the anti-Semitic conspiracy theory QAnon. Others wore sweatshirts that read things like “Camp Auschwitz,” an obvious glorification of the Holocaust. During the pro-Trump “Save America” rally leading up to the storming of the Capitol building, a Republican congresswoman, Mary Miller, even quoted Hitler.

While I wait for my city’s mikvah to reopen after being closed due to COVID-19 in order to finalize my conversion, I find myself revisiting the same question I asked myself back in Reykjavik: Is my conversion a smart choice?

In the two years that have passed since soaking in a hot tub with neo-Nazis, I have to admit that my certainty in my desire to convert has taken a few blows. But what keeps me pushing toward the mikvah, however, is that when I’m asked if I’m Jewish, I always say yes. pjc

Caleb A. Guedes-Reed is a journalist based in the Appalachian mountains of Virginia. Influenced by his world travels, his work often focuses on LGBTQ issues, spirituality, religion and human rights. This piece was first published by JTA.