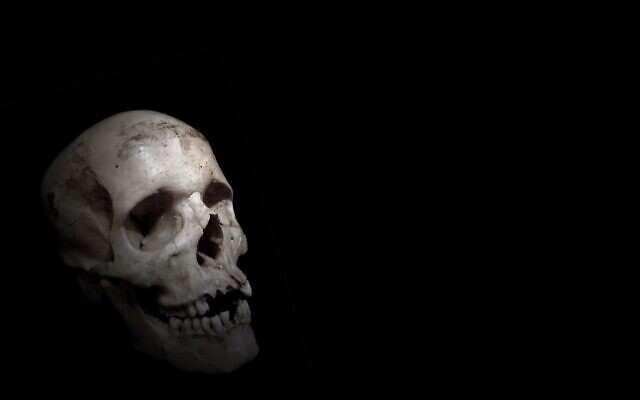 It’s a horror film buff’s favorite time of year: The nights are getting longer, the air is getting colder and the fallen leaves are making those eerie skittering sounds that seem to follow you down the street.

If you’re seeking some Jewish representation in your scary viewing lineup, read on: The following movies and TV series draw on Jewish legends to generate some serious screams.

‘The Golem’ (2018)
Brothers Doron and Yoav Paz directed this historical horror film starring Hani Furstenberg as Hannah, a Jewish woman from a 17th-century shtetl. She creates a golem, a humanoid figure with supernatural strength made from clay, for protection when a group of violent noblemen from a neighboring village accuse the Jews of cursing them with a plague. She develops an attachment to her creation, even as it turns its dark powers of destruction from her enemies to her community.

Dan Ben-Amos, professor of folklore in the Near Eastern Languages and Civilizations Department at University of Pennsylvania, said stories about golems often draw from the biblical story of God creating Adam from the earth. They also may stem from Jews’ fear of violence and persecution.

“Pogroms were a regular historic event in Jewish life,” he said. “They could not protect themselves, at that time, by themselves. They needed some stories from God that would protect them.”

Filmmakers have been inspired by golems for at least 100 years. Paul Wegener’s 1920 silent horror film “The Golem: How He Came Into the World” reimagines the legend of the golem of Prague, who was created to protect Jews from a pogrom but quickly goes rogue.

‘The Possession’ (2012)
This terrifying film was directed by Ole Bornedal and stars Natasha Calis as Emily, a young girl who brings home a mysterious box engraved with Hebrew letters from a garage sale, and then starts behaving strangely.

Her family consults experts in Jewish mysticism and discovers she has been possessed by a dybbuk, an evil spirit that possesses and ultimately destroys its human host. Similar to the devil in “The Exorcist,” the dybbuk must be forced out of the host’s body with a ritual.

Ben-Amos said the dybbuk legend emerged during the 16th century, though the idea of demonic possession was widespread.

“Very often, when people got some sort of a disease and began to behave in an insane or unnatural way — and sometimes people claim that they have voices that are not their own — it is considered a possession by another spirit, and the magicians, the ba’ale shem, would be called to cure the individual,” he said.

‘Juda’ (2017)
Judaism and vampire stories have a fraught history due to the role of blood in anti-Semitic conspiracy theories. Ben-Amos said the blood libel, which alleged that Jews mixed the blood of Christian children into matzah, was widespread during the Middle Ages. Bram Stoker’s “Dracula” and F. W. Murnau’s “Nosferatu” were both widely acknowledged as anti-Semitic caricatures, from their large noses and Eastern European origins to their association with vermin.

So is it possible to portray a Jewish vampire sympathetically? “Juda” director Meni Yaish and writer and star Tzion Baruch think so.

The Israeli series, which is available on Hulu, follows Baruch’s Juda, an Israeli gambler who is bitten by a Romanian vampire, Anastasia Fein’s Tanja, after a poker game. As Juda begins his transformation, Tanja realizes she has broken the rules of her clan by accidentally biting a Jew, which threatens her own immortality.

Juda, meanwhile, consults with a rabbi about various aspects of vampiric existence and Jewish law: Can he enter a room with a mezuzah? Nope. Can he drink blood even though kosher law forbids it? Yes, but only if it comes from an animal and not a human.

‘Corpse Bride’ (2005)
Director Tim Burton’s stop-motion film isn’t technically a horror flick, but it has enough animated corpses and skeletons to land solidly in the creepy camp. It tells the story of Johnny Depp’s Victor, a groom who accidentally puts a wedding ring on the finger of Helena Bonham Carter’s Emily, a murdered woman. She proclaims Victor her husband and takes him to the underworld, where he struggles to escape back to his real fiancée.

The story is based on an old Jewish folktale about a young man who accidentally weds a corpse by placing a ring on her finger and jokingly reciting vows. He and his friends are horrified when the body rises from the earth and cries, “My husband!”

Jewish folklorist Howard Schwartz retells the tale in his 1987 book “Lilith’s Cave: Jewish Tales of the Supernatural,” in a story titled “The Finger.” His source was the 17th-century volume “Shivhei ha-Ari,” which collected earlier stories about Rabbi Isaac Luria of Safed, a city located in what is now northern Israel. In the legend, the rabbi rules that the marriage between the terrified groom and the corpse is invalid because the dead have no claim on the living. PJC

Sophie Panzer writes for the Jewish Exponent, a Jewish Chronicle-affiliated publication where this article first appeared.