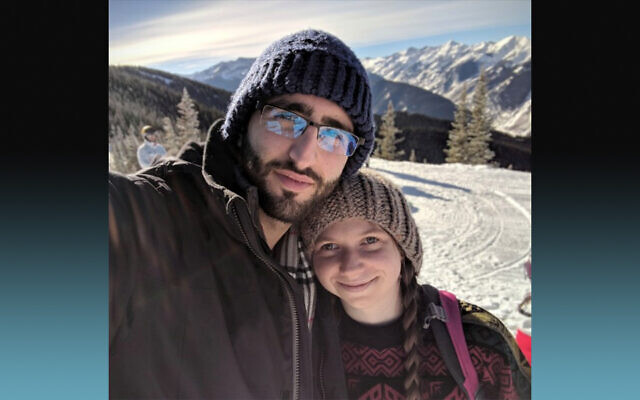 An embarrassing injury turned out to be a big blessing in the life of Daniel Heinrich.

The Jewish Federation of Greater Pittsburgh’s new director of young adult engagement and community collaboration was working as a sous chef at an Israeli restaurant. He had just finished putting in an 80-plus hour work week, and was preparing a Spanish meal for his wife, Alex Kimmel, a meal they had previously enjoyed while on their honeymoon.

Then a blade fell out of Heinrich’s food processor, landing on and cutting through his big toe.

“I was out of work for three months,” Heinrich said. “I had to get surgery. I couldn’t be on my feet.”

But, he added, “it was the best thing that happened to me.”

While recovering from the injury, Heinrich realized the long hours at the restaurant were making him unhealthy and that he had become borderline malnourished. He needed to find a new line of work.

“I was 23 years old and very much trying to find this thing, a passion for something, a career — something that I could really dig into and find community,” Heinrich said. “I found that at the synagogue and in the job. I fell in love with Jewish professional work.”

Heinrich’s Jewish communal roots run deep. He grew up in Huntington, Michigan, a suburb of Detroit, where his parents were active in Jewish life. His father served on several committees of the Jewish Federation of Metropolitan Detroit, and his mother is now CEO of Jewish Senior Life Detroit — similar to Pittsburgh’s Jewish Association on Aging.

“I grew up with a very deep-rooted understanding that it is so powerful and impactful to give back to the community, as a lay leader and a professional,” he said.

Heinrich was involved in his local NFTY chapter and served as president of his congregation’s youth group. In 2008, he traveled to Israel with NFTY, where he met his future wife and was inspired to study Jewish history. When he returned to the U.S., he enrolled at Brandeis University in Massachusetts and graduated with a degree in Jewish Studies in 2014.

And yet, instead of going to work for a Jewish Federation or a Jewish Community Center, he decided to become a chef. In fact, it was while studying abroad in Israel during his junior year that his passion — at least at that point — for the culinary arts took hold.

Once back in Massachusetts, the cooking skills he honed in Israel landed him an internship — which turned into a job — at a French bistro. Heinrich spent the next three years working as a professional chef, first in Boston and then
It was while in New England that Heinrich had his accident, began working at Temple Beth El and got formal training to shore up his new career. He returned to Brandeis for a master’s in professional leadership, and earned an MBA in nonprofit management from the Hornstein Jewish Professional Leadership Program.

After he graduated, Heinrich and his wife, an Erie native, began planning their next move. She applied to Carnegie Mellon University for her master’s in arts management, and he landed the young adult engagement position at Pittsburgh’s Federation. The couple then moved to their new home in Squirrel Hill.

Heinrich is familiarizing himself with his new city and neighborhood while restarting in-person Federation Young Adult Division programs that had gone virtual because of the pandemic.

Honeymoon Israel, which takes couples of all cultural, racial, religious, gender and sexual identities to Israel for nine days, is the most significant project on Heinrich’s to-do list right now. The trip is planned for February 2022, and applications started coming in a few weeks ago. He is also excited about the Friends Match program, which pairs young adults, aged 22-45, looking to make new friends in the area.

When not working with the young adult Jewish community, Heinrich will be taking in the Pittsburgh restaurant scene and finding places to hike, and maybe even camp, if he finds the time.

An eternal optimist — who also has a passion for environmental work — Heinrich said he is excited about working with young adults.

“I get to bring that passion and excitement and energy for the multiplicity of a person’s Jewish identity,” he said. “I get to spend every day talking to people who not only are Jewish, but are Jewish and environmentalists, or Jewish and social justice advocates, or Jewish and a parent or a caretaker for a family member.

“It’s a really great way to be a part of a community that is so passionate and idea-driven.” PJC