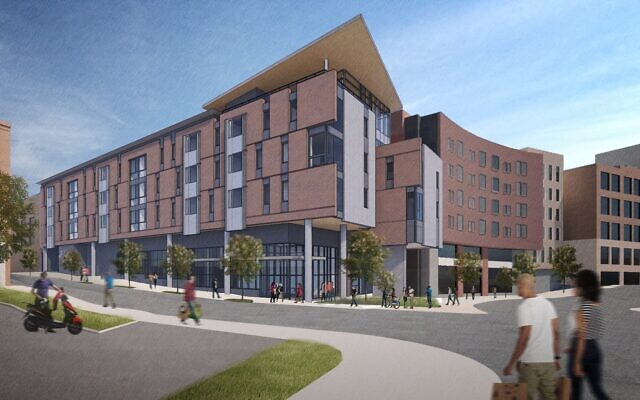 After years of the Squirrel Hill Theater sitting vacant, and at least two thwarted plans, ACTION-Housing has broken ground and started construction on a mixed-use development on Forward Avenue between Shady and Murray avenues.

Flats on Forward, as the project is dubbed, will be a four-story building with about 10,000 square feet of commercial space at street level, 43 affordable, one- and two-bedroom apartments, and 31 off-street parking spaces, according to Lena Andrews, ACTION-Housing’s director of real estate development.

ACTION-Housing bought the long-vacant site for about $2 million through a limited partnership, she said. The project is backed by about $12 million in tax credit equity, which was bought by BNY Mellon.

“This project is challenging and took many years to get off of the ground, but we are thrilled that it’s now under construction and will bring high-quality affordable housing in a beautiful building to the gateway of Squirrel Hill,” Andrews said.

One obstacle to construction was an existing steam plant behind the site, Andrews said. It was built a century ago to provide heat to nearby apartments, and contractors had to fill the vault — which was destabilizing Maeburn Road — with concrete.

The contractors also are installing conduits on the street where the city and Squirrel Hill Urban Coalition plan to install new streetlights, said Mardi Isler, the coalition’s president.

“The Squirrel Hill Urban Coalition has been working with the city for almost 13 years to improve the Forward Avenue corridor,” Isler said.

Isler, who has lived in Squirrel Hill for 38 years, said the coalition has adopted a garden near the I-376 Parkway and continues to search for spots along Murray and Forbes avenues to install new benches. It recently completed work at O’Connor’s Corner, near the intersection of Murray and Phillips avenues.

Forward Avenue is much older than many Squirrel Hill neighbors might realize. It probably originated as an Indian trail that came up the eastern slope of Squirrel Hill from Nine Mile Run valley and descended the hill’s western slope into the Saline Street valley — a shortcut to the Point, said Helen Wilson, vice president of the Squirrel Hill Historical Society.

In the late 1800s, the Keysers owned land on the opposite side of Forward Avenue, past Beechwood Boulevard, where the Irish Centre of Pittsburgh is now. They bottled and sold effervescent mineral water — highly prized as a treatment for dyspepsia, kidney stones, hepatitis, gallstones, urinary tract inflammations and other disorders — from a sparkling spring on the property, Wilson said.

Another block of Forward Avenue, between Tilbury and Shady avenues, runs alongside Pittsburgh Allderdice High School, which was named for Squirrel Hill resident Taylor Allderdice (1863-1934), a member of the city’s first school board and president of National Tube Co.

On the block of Forward Avenue where Flats on Forward is being built, the first “little red brick schoolhouse” in Squirrel Hill was located on Forward at Eldridge Street around 1868, Wilson said. It was also in the Shady-to-Murray block of Forward that Thomas A. Watkins (1861-1925) built the Watkins Development in the 1920s. This complex of buildings took up both sides of Forward Avenue and included all of the smaller apartment buildings behind the Morrowfield Hotel.

There were eight stores inside the Morrowfield, and the adjacent buildings included a showroom for new cars, a dance hall, a theater, a snack bar, a soda fountain, a drugstore, a bowling alley, a five-story garage and a heating and refrigeration plant.

Most of Watkins’ red brick buildings are still standing. The bowling alley moved to its present location from the building that was on the site of the Squirrel Hill Theater, which, when it opened in 1937, was “the first theater in Pittsburgh to be built expressly for sound projection, … a delightful difference from the gaudiness of the motion picture palaces of yesterday,” according to The Pittsburgh Press.

Meanwhile, at 5832 Forward Ave., adjacent to the theater, the Jewish Community Center got its first toehold in Squirrel Hill when the Irene Kaufmann Center followed its clientele there Hill and took over the Boys’ Club in 1943. In 1958, the center decided to move to its present location at Forbes and Murray.

The Flats on Forward project is anticipated to be completed in the fall. PJC