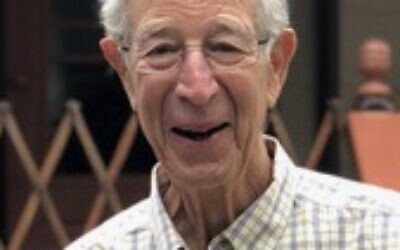 WEIS: David Howard Weis of Sarasota, Florida, died peacefully in his home the morning of June 14, 2020, just two weeks shy of his 89th birthday. David was born in Pittsburgh, PA, July 2, 1931. He graduated from Allderdice High School, class of 1949 and went on to get a degree in business from the University of Pittsburgh in 1953. He served his country in the US Army during the Korean War and was stationed in Germany.

David met his match in Edris Tannenbaum in 1957 and they were married a year later. They lived in Cleveland, OH where their first daughter Elise was born then moved back to Pittsburgh where David founded Thermal Industries Inc. Soon after their second daughter Deborah (AKA Topaz) was born. The family moved to Churchill in 1967.

David was passionate about his work. He was an entrepreneur and an innovator. Having started his business in the back of a rented garage, Thermal Industries grew into a national company that ultimately employed several hundred people, many of whom remained loyal employees for 25 – 30 years. He was considered the pioneer of the vinyl window industry.

He enjoyed traveling and spending summers at his home in Chautauqua NY. David was an excellent tennis player. He enjoyed sailing on Lake Chautauqua, playing golf and philosophizing with his Chautauqua friends. One of his favorite pastimes was napping on his porch with an open book in his lap.

After selling his business, David and Edris retired to Sarasota, Florida where David said he was living in Paradise.

In lieu of flowers memorial donations may be made to National Council of Jewish Women in Pittsburgh or The Weis Family Fund, Chautauqua Institution, Chautauqua, NY 14722.

There will be a celebration of life in the Sarasota, FL area after COVID-19 restrictions are lifted.