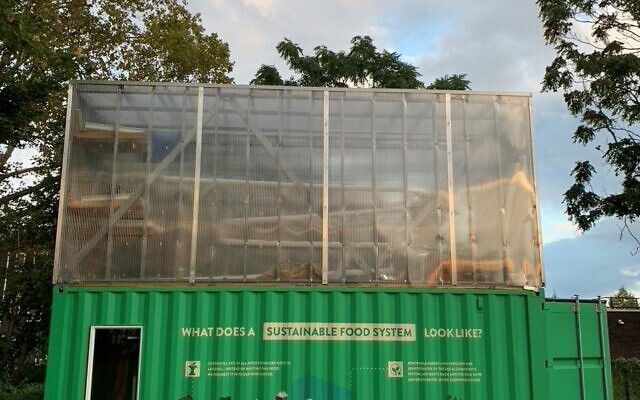 If an answer to global warming and climate change is ever found, Carnegie Mellon University student Dylan Lew might get credited with providing part of the solution.

Lew is the CEO of Ecotone Renewables, which creates liquid fertilizer and renewable energy from food waste. That waste, according to Lew, contributes significantly to global warming.

Ecotone Renewable’s method for converting food waste to fertilizer and renewable energy is unique, utilizing an anaerobic digestion technology. In the anaerobic process, microorganisms break down biodegradable material in the absence of oxygen.

Ecotone and its partner, Impact BioEnergy in Seattle, both convert food waste using this process. In fact, an internship Ecotone’s original CEO had at Impact prompted the company to create a modular, more portable system.

Lew, who studies material science and engineering at CMU, describes Ecotone’s technology as a sort of “synthetic stomach,” which the company refers to as the “Seahorse.”

“It basically works by grinding up food waste and puts it through a stomach that has a whole bunch of good bacteria and microbes that eat up all the food waste,” Lew said. “The output of the system is a nutrient-dense liquid fertilizer, as well as methane gas we capture from the process. We run that through a generator to make electricity.”

The fertilizer is donated to the nonprofit Repair the World, but the company’s contributions to a sustainable world don’t end there.

The Seahorse is situated in an 8-by-20-foot shipping container. Above it, Lew and his partners have built a greenhouse where plants are grown hydroponically – just water, no soil. The produce is either donated to charities or sold at local farmers markets.

Before becoming the CEO of Ecotone, Lew already had an interest in alternative farming and sustainability. While still a freshman, he was working on a closed-loop, water-based farming technique: Plants filtered the water they were growing in, and fish living in the water provided fertilizer for the plants.

He joined Ecotone in 2017, tasked with helping to create a system to store methane gas. He will graduate later this year from CMU’s IMB program with both a bachelor’s degree in material science and engineering and a master’s in material science.

Lew was born in Jerusalem and moved to Connecticut with his family. The college student lives in Squirrel Hill but will move to South Carolina in July to work for GE Renewables in its two-year Edison Engineering development program. He plans to continue to work with Ecotone during that time.

“I want to make sure that we position Ecotone to be in a spot where the four of us that are working diligently on this can be full-time employees and actually make a salary,” Lew said. His partners include Chief Financial Officer Elliott Bennett, Chief Technology Officer Robert Davis and Chief Operating Officer Kyle Wyche.

The four used a second-place prize of $10,000 from a renewable energy competition and a $25,000 Ford Community Challenge prize to launch the company and build the Seahorse, and are putting any money made back into the company.

For the time being, Ecotone is working with 412 Food Rescue, which donates food it is unable to use, and Pittsburgh residents who collect food scraps in compost containers.

Before he moves to South Carolina, Lew and his partners are busy. They recently moved their system from East Liberty to Swissvale and will be spending the next several months getting it up and running and implementing some updates. They will also be reconstructing the greenhouse, which they had to deconstruct to move.

Lew said that even though he will be leaving the Steel City in July for a few years, he has fallen in love with Pittsburgh and points to his move here as helping to grow his Jewish identity.

“I would meet people and later find out they were Jewish,” he said. “It’s been amazing to be in Pittsburgh and have a strong Jewish community. In Connecticut, my family was one of like three Jewish families in a town of like 40 to 50,000. It’s been great to be so openly Jewish. I have this pretty amazing tradition of going to Shabbat with my friends, which has now been Shabbat-to-go. I appreciate the strong network we have because it’s not something I’ve experienced before.” PJC