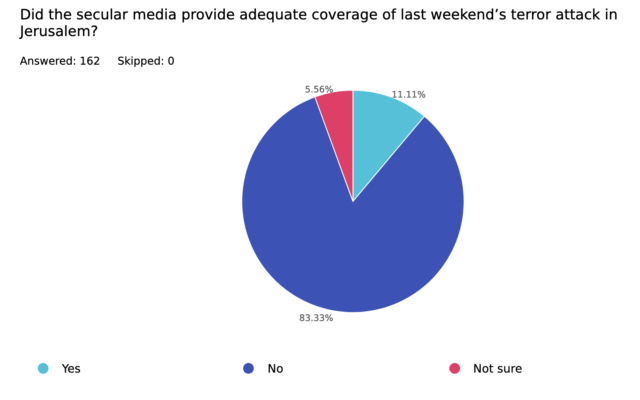 Last week, the Chronicle asked its readers in an electronic poll the following question: “Did the secular media provide adequate coverage of last weekend’s terror attack in Jerusalem?” Of the 162 people who responded, 83% said no; 11% said yes; and 6% said they weren’t sure. Thirty-four people submitted comments. A few follow.

Our local media is one-sided and is not objective in reporting on instances in Israel.

This matter was overshadowed by the FBI raid on Trump’s estate.

The media mostly prefer to report on the things Israel does that can be construed as negative and rarely the negative things that are done to us.

Does the Jewish media provide any coverage at all on the murder of children in Gaza by the IDF? Or are their lives of no consequence?

Of course not — just like the Chronicle. Taking sides with the Arabs.

The description of the Kotel as “one of Judaism’s holy sites” (as opposed to the most holy site in my view) was dismissive. The BBC also described the Wall as a place that Jews make a pilgrimage to once a year. Well, people were there for the end of Tisha B’av which comes once a year, but BBC seemed to miss the ongoing, daily prayers made by Jews all year long — as though they confused it with something else (on purpose?).

They provided the bare minimum and I had to search The New York Times and Washington Post to find it!

Had a Jewish Israeli been the shooter, it would have been front page news. And, for example, The New York Times bent over backward to focus on justifying the violence.

It’s hard to find an even-handed news source when it comes to Israel.

I asked several individuals if they knew about the attack. They had no idea; hadn’t read or heard about it. PJC