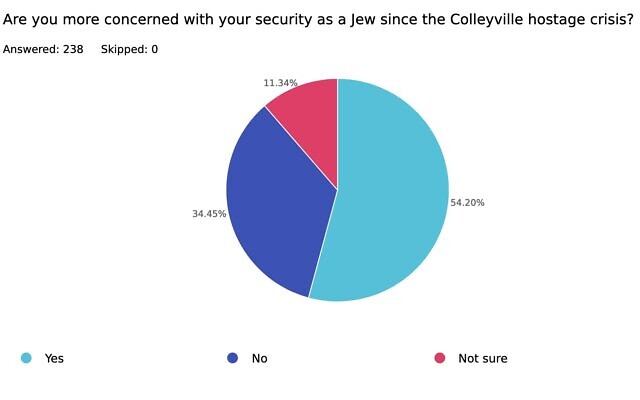 Last week, the Chronicle asked its readers in an electronic poll the following question: “Are you more concerned with your security as a Jew since the Colleyville hostage crisis?” Of the 238 people who responded, 54% said “yes,” 34% said “no,” and 11% said they were “not sure.” Sixty-five people submitted comments. A few follow.

After 11 people were murdered here, why would anyone here be MORE concerned about their security as a Jew? I’ve been concerned and remain concerned, but will continue to be a proud Jew publicly and go to shul in person, consistent with COVID safety. I may as well stop breathing as to let these fears paralyze me.

As safety committee chair of one of our shuls, I am always concerned. The Secure Community Network daily email is an eye-opener. Jewish communities and individuals are under constant attack or threat.

I haven’t felt safe since the tragedy at Tree of Life.

My concern level has gone up because the rabbi let the criminal into the building for tea! I am assuming that he broke the protocols that were in place and I am fearful that he is not the only one. Hopefully the Pittsburgh community will use this to re-emphasize the need for screening of
whomever enters a holy building

While there are awful examples of anti-Jewish behavior and its consequences, I refuse to give into paranoia…the sort being whipped up by so-called communal leaders and rabbis. I haven’t and won’t alter my behavior because some folks may want to do me harm.

Although the Colleyville situation is highly disturbing because of the “specific targeting aspect” of it and similar incidents, I am much more fearful of the risks to the safety of myself and my family stemming from the increase in the number of violent crimes being committed on a daily basis in cities throughout the United States.

10/27/2018 led to hyper alertness and concern going forward as long as I shall live (I’m a Tree of Life member). Even heightened precautions could not prevent Colleyville but lives were saved thanks to prior safety training. So how can we improve safety measures further?

Jews everywhere need to be concerned and be careful. Nobody knows where the next tragedy will happen.

In my opinion, the publicity exposing how easily the bad actor gained access has made smaller, more remote synagogues like mine more attractive to copycats/other bad actors.

I am more concerned in general about the uptick in antisemitism. It has been building for a while now. I worry that the upcoming trial of the Tree of Life shooter will intensify dangerous, violent feelings and result in more overt antisemitic acts.

I remain as concerned now as I was following the Tree of Life massacre, though I am somewhat heartened by the preparatory measures my temple has undertaken, and that similar measures were helpful in ending the Texas hostage situation.

Never knowing who is lurking around my small shul, I will just stream services. I know we have to say fear won’t stop us, but we have to be realistic! The Texas rabbi actually opened the door for the stranger… bad decision.

I’m an 85-year-old man and I still don’t understand why people hate the Jews. I don’t know why but so many do and you would think after all these years we would be accepted.

While there is certainly an uptick in antisemitic events, I think it important to NOT make this an issue of fear but rather one of awareness without appearing to cower down. Cowering in the face of adversity gives those who would do us harm a sense of winning. Spit in their damn eye!

I am always fearful. I will not go to the synagogue tomorrow although it is my husband’s yahrzeit.

Security was an issue before, and it’s an issue now. Nothing actually changed just because someone took hostages. These dramatic things are not important long term. What we really need is to end the small antisemitic day-to-day attacks (for example from liberal universities). Those take a cumulative toll, which ends up being worse because it normalizes such behavior. PJC